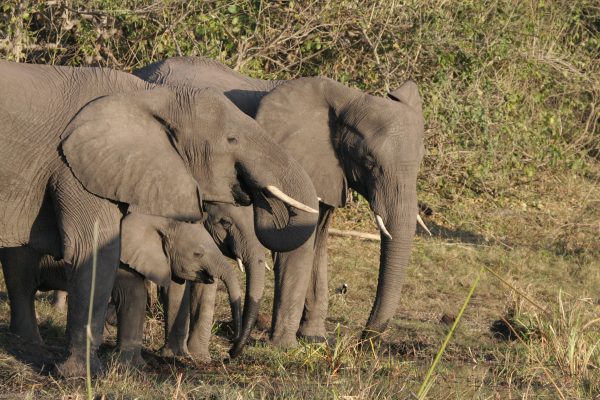 I confess to a long-held affection for elephants with their floppy ears and unwieldly trunks.   I’ve seen them in India still used as beasts of burden, in Vietnam as a tourist attraction around ruins and in zoos circling their small enclosures. But in protected parts of Botswana, these largest of land animals move at their pace wherever and whenever they want. 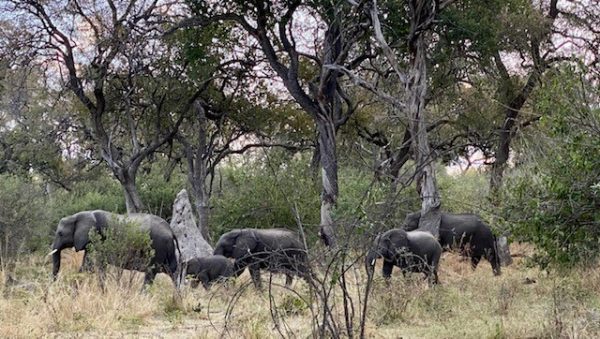 First Sighting of a family of Elephants in Botswana

After landing on an isolated landing strip in the Okavango Delta, Botswana, we were loaded into two jeeps and set out for our first late afternoon drive through the diminishing light. Not five minutes later, our driver called out “elephants to the left.” And there they were, two adults, two adolescents and a baby, moving through the high grass and woods, ignoring us as they looked for forage. Without our guide’s help, I wouldn’t have seen them as their neutral grey color blended into the camouflaged background. Our eyes became sharper as the trip progressed. 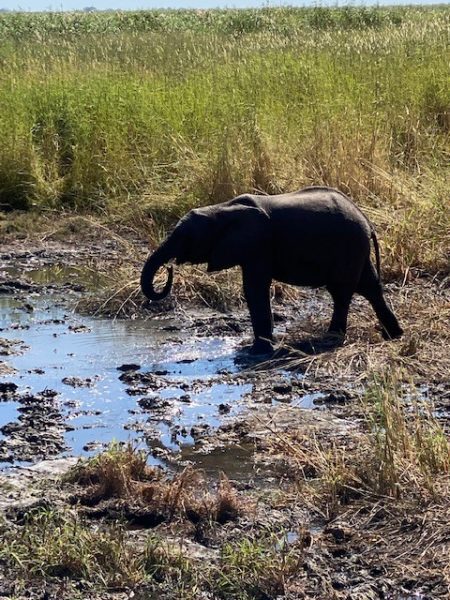 Elephants serve many purposes in the wild and receive comfort from various parts of nature. They are herbivores and will nibble on the flowers of day water lilies, tear off tree bark for its calcium and knock down trees to eat leaves. This effort maintains open plains and provides walking paths for other animals. They use the shepherd tree for shade and to take off mud.  Watering holes are created by elephants as they dig for water.  The hole fills and provides soothing mud for their skins and an underwater environment for small water creatures.   A large fever berry tree is poisonous to most animals but not elephants or giraffes.  Its roots and leaves can treat an animal wound like an antiseptic. 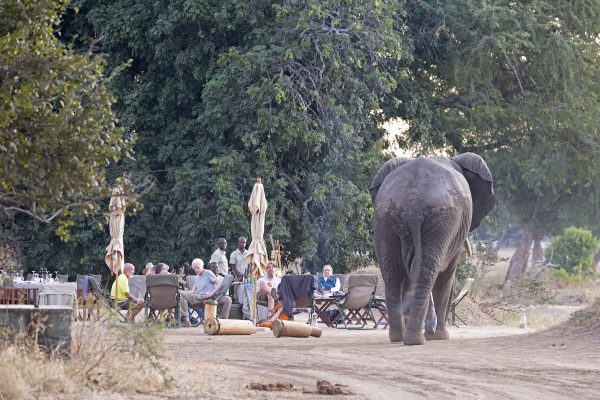 Mid-afternoons in camp were usually accompanied by elephants following well-worn trails nearby, providing silent entertainment from our porches.  In one possession, mothers nudged their little ones to keep up and not be distracted by food. On our last afternoon in camp, while playing cribbage with my, brother, he looked up and pointed behind me.  A lumbering elephant casually passed by not more than 10 feet away heading to the nearby river.  The staff had warned us of the path through our camp used by elephants and hippos whether we were there or not.  Even growing towns have trouble stopping elephants from following their age-old highway.  Many a garden and wooden fence had been trampled down by undeterred elephants. 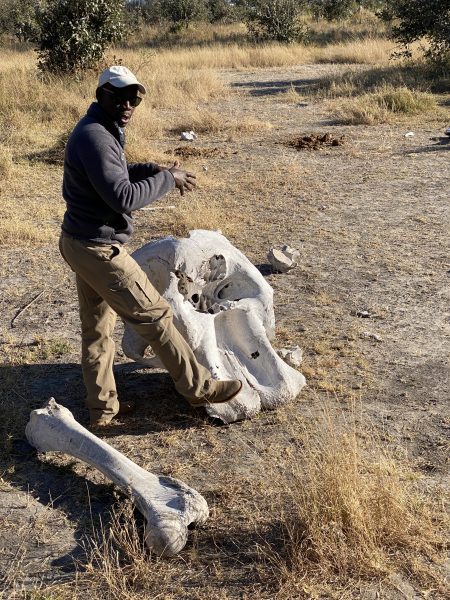 Elephant bones were easy to identify by their size but also because of the honey combed skulls, so designed to keep their heads lighter to carry.  They go through six sets of teeth as new ones push out the old ones.  After the last set is worn down, so is the elephant.  Culling of old or “extraneous” elephants has prompted much debate over the last 30 years.  It was banned completely for a while and recently allowed in Botswana where a limited number of old bulls are set aside for hunters who pay large sums for the experience.  This brings in money to the countries to continue their conservations efforts.  Poaching, though, is still a problem. 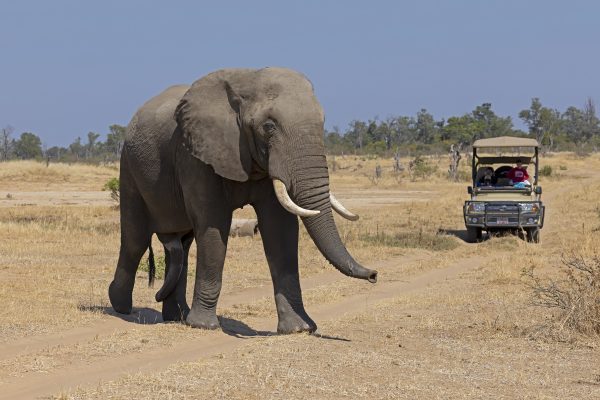 Only twice were we examined by elephants with a more sinister gaze.  Both involved our being in their paths. During a day game viewing ride, a large elephant stood at the left edge of the road, daring us by his stare to go any further.  Our driver stopped and we observed. When the giant animal was convinced we were not advancing, she crossed the road, followed by smaller members of the family. We watched them strip small trees of their leaves and then with almost a nod to us, they moved on.  An angrier response came from the matriarch of a herd crossing the road at night when our jeep with lit headlights approached.  She flapped her ears, making several mock charges with a trumpeting sound.  Our driver, Chester, revved up the motor honking the horn and turning off the headlights, allowing the blinded elephant to see again. After a tense stand-off and when the last of the herd had crossed the road, she turned aside without a backward glance, knowing she had protected her family. Chester admitted it was a tense situation, but he knew how to handle it.

Botswana, with the second strongest economy in Africa, relies heavily on the photo safari tourist trade.  It also has the largest number of elephants in the world, possibly even too many.  We witnessed native villages built for local tribes to entice them away from hunting wild animals and to protect them against charging elephants.  They receive a portion of the entry fees from the nearby national parks.  Environmentalists and politicians have strong opinions on the way forward to maintain sufficient levels of elephants and economic development, but I am convinced all want the lumbering tusker healthy and safe.  And, despite seeing them every day of our ten-day photo safari, I never grew tired of their presence. 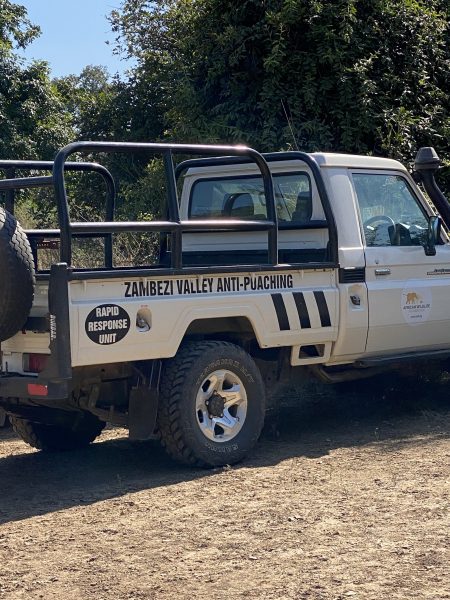