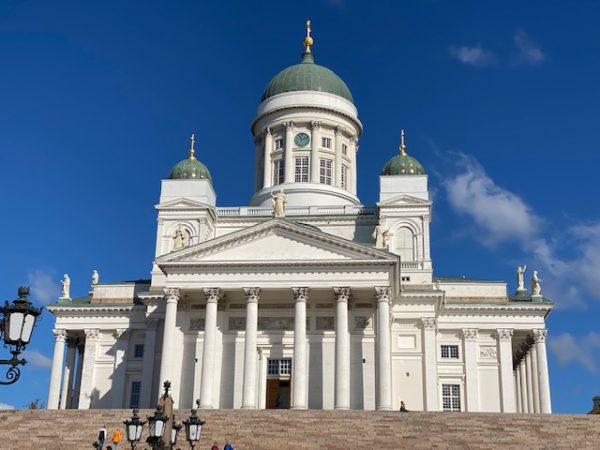 I don’t know why Finland has always beckoned.  Its location between Russia, that looming communist country to the east and the very liberal Scandinavian presence on the west was intriguing.  Both sides have claimed its territory – Sweden for 700 years between 1150 and 1809 and Russia from 1809 to 1917.  Even as an independent country, Finland considered itself as the broker between East and West – ex.  Helsinki Accord in 1975 that helped end the Cold War by confirming countries’ boundaries and their inviolability.  But I wanted to know more about its people, themselves a mix of east and west.

From our Helsinki guide, the joke is that Finns didn’t need Covid for social distancing.  They come by it naturally. An individual’s privacy is respected.  However, our County Court at Law Judge Bill Harris, who lived in Finland in 1980-81, described them as quiet at first but quite amicable and generous when you get to know them, even referring to them as “friendly Germans.” They are modest, don’t talk salaries and are not showy in their dress.  Even in central Helsinki, their largest city, the streets were quiet.  Three on a road is considered a traffic jam.  Because of the tough winters, most of their parking is underground which facilities can double as air raid shelters.  Helsinki is known as a façade city with its buildings beautifully maintained on the outside and modest on the inside.

During our morning at Senate square, few people walked through even as it is considered their most important historical center with the largest Lutheran Church on one side and government buildings around.  Our guide often sees the country’s young female prime minister, Sanna Morin, strolling through the square without bodyguards.   She had caused a small uproar recently by hosting a birthday party at the official Prime Minister’s residence that included late night dancing and drinking.  Most Finns thought she deserved her privacy for the party with a few grumbles about how “it looked.”  I wished our presidential grumblings were about something so small. 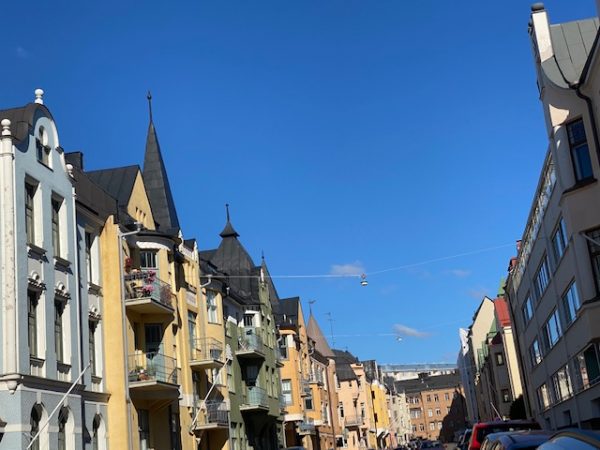 Homes in Helsinki with flagpoles

Finns are proud of their flag and fly it on many occasions – some official and come by custom – including Mother’s Day, Poet’s Day, Day of Finnish Literature, and a day to celebrate Finnish music on the birthday its most famous composer, Jean Sibelius who wrote “Finlandia”, a nationalist symphony to support their independence struggle against Russia. We saw flag poles on most of the homes awaiting the next holiday. 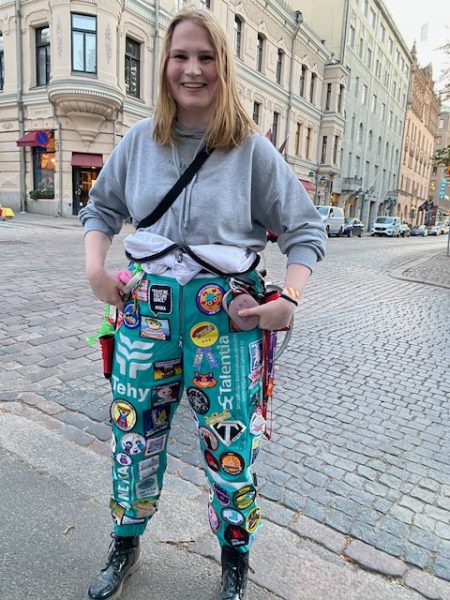 A very active college student with patches indicating her activities 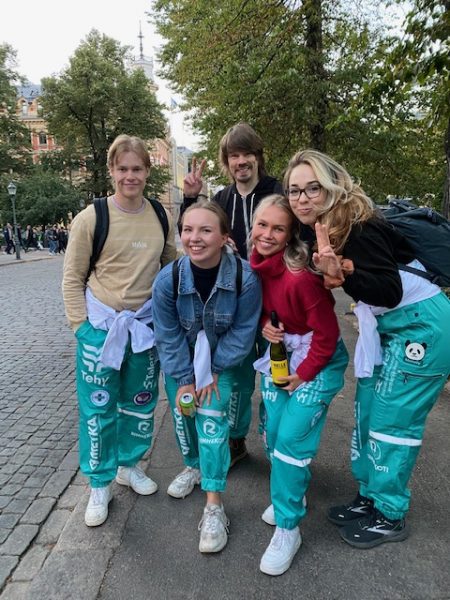 Children have strong early years as new parents are given a “baby box” worth about $400 that includes a mattress that fits in the box for an early crib and baby needs such as diapers, body suits and bathing products.  A parent may stay home the first year with a 70% salary guaranteed. College is also paid for. In a park near our hotel, a group of new college students wore bright clothes with patches indicating their various activities in the university.  They were celebrating the beginning of the school year and shared their enthusiasm with us. 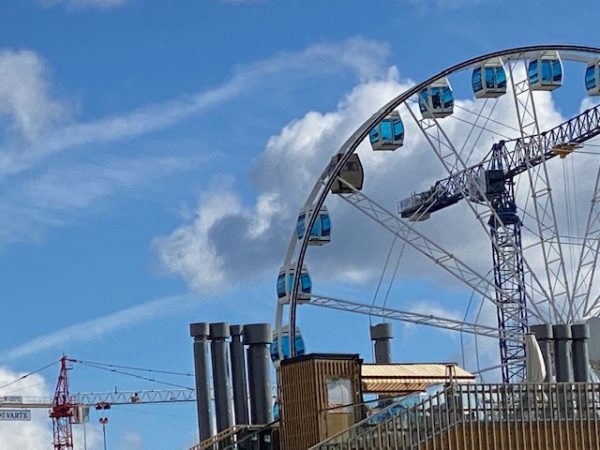 Because of its tough winters, the Finns have embraced saunas. They are found everywhere – homes, hotels, public saunas and even one of the cars on its famous Ferris Wheel has darkened windows to provide privacy for the sauna inside. 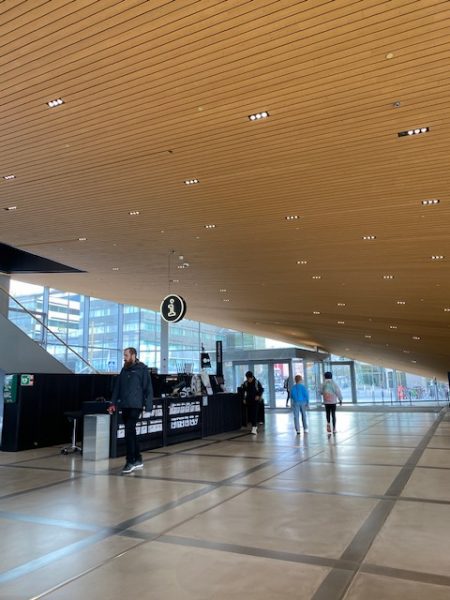 Entry of Oodi Library in Helsinki 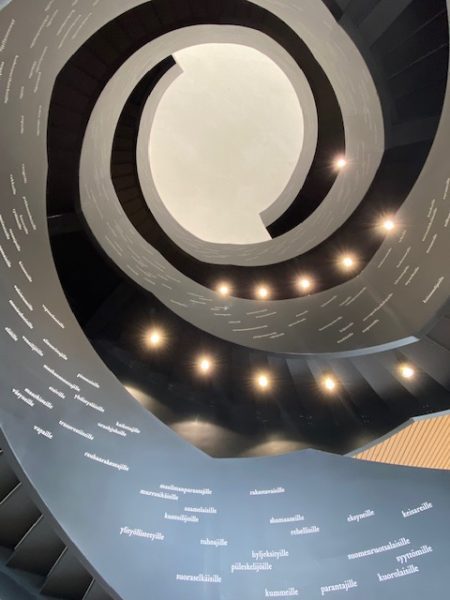 The most impressive building we saw in Helsinki was the new Oodi library that calls itself the “living room for its people” and reflected the communal need of the Finnish people to share resources.    On the circular stairway are painted the groups whom the library serves – including the poor, strangers, the spiritually enlightened, orphans, the depressed, dreamers, stargazers and even the henpecked – meaning everyone. 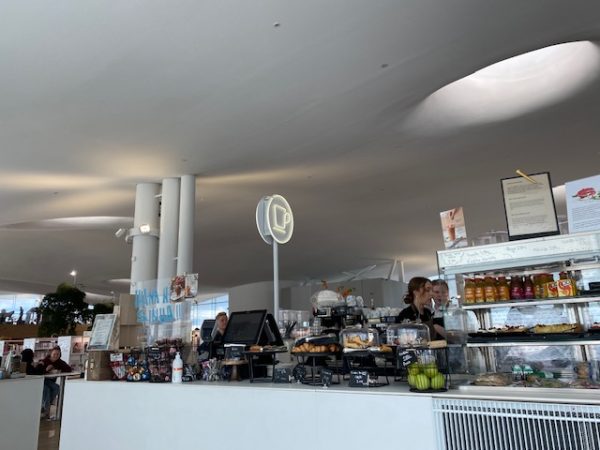 On the third floor, we had a wonderful cappuccino at the coffee bar as we watched a group of young mothers and their small children talk and play in a circle.  Baby strollers filled a nearby area.

Downstairs bustled with young people who took advantage of the free video game arcade, computers, printers (including 3D printers), and sewing machines.  Musical instruments and hand tools could be checked out.  Six to seven thousand patrons use the library daily, including some who dine at its restaurant.

Discussion of the Ukrainian war was inevitable. Many cruise ships had cancelled their trips since Finland is so close to Russia, hurting their tourist industry.  Wealthy Russians had entered Finland overland so they could fly to other parts of the European Union.  Since five percent of the population still speaks Russian, there was some small support for Russia. But the country itself decided to support Ukraine and had broken their years of “pro-west neutrality” by requesting membership in NATO.  They recognize their actions are “poking the bear” but are willing to take that risk and for that, they must be admired.

4 Responses to “The Finns – A People in Between”