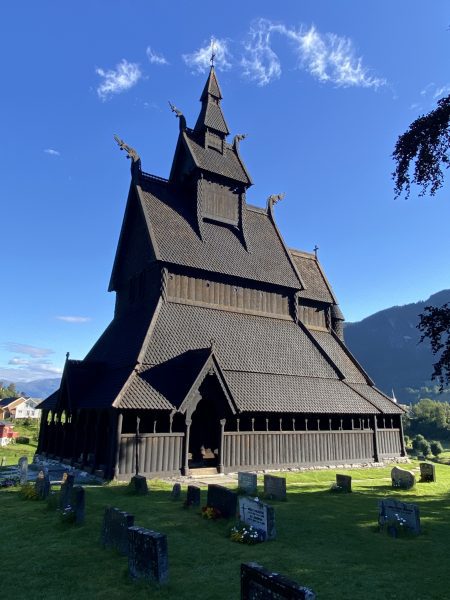 Churches are constantly repurposed.  In Istanbul, Turkey, St. Sophia’s began as a Christian Church, morphed into a mosque after the Ottoman conquest in 1453, became an historical structure in 1934 and is once again a mosque as of 2020.  Even in Paris, we’ve seen churches change their allegiance from one denomination to another and commercial buildings become churches. It’s a different way to track a country’s history, spiritual path and changing culture. We experienced this on a recent trip to Finland and Norway. 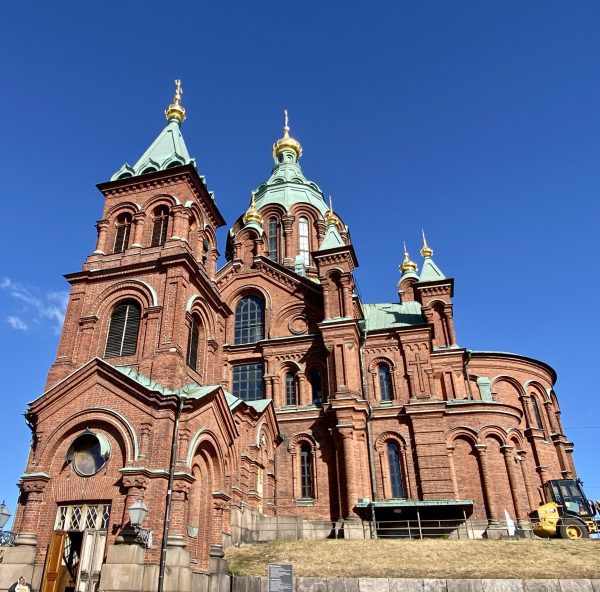 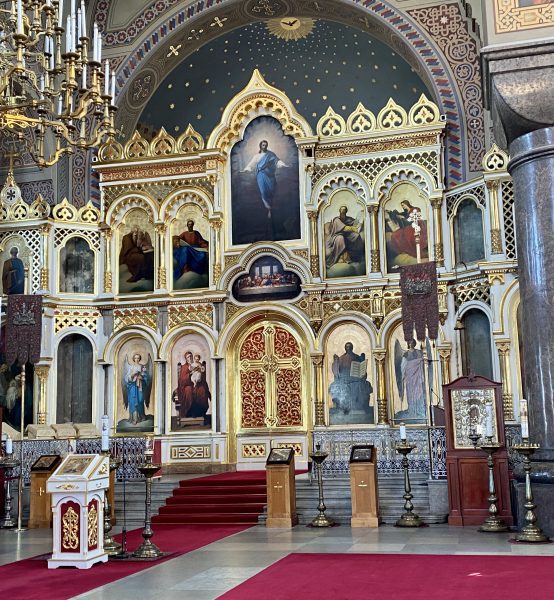 The first church on our Helsinki tour was Finnish Orthodox, the Uspenski Cathedral, built in 1864 when Finland was a Grand Duchy in the Russian Empire.  Perched on a hill overlooking Helsinki and its surrounding waters, the church easily looks it part as the largest orthodox church in Western Europe. Reflecting its past, the cathedral’s golden cupolas and redbrick façade give notice of the strong Russian feel inside.  We climbed the steep steps past two gypsy beggars, pushed through heavy wooden doors, and came into a dimly lit space glittering with a decorative gold leaf altar.  Russian dedications remain on the walls.

Finland has long considered itself a mediator between the East and West.  Five percent of the population still speaks Russian.  Recently though, it moved towards the West by requesting membership in NATO. It’s no surprise then that the Uspenski Cathedral had severed ties with the Russian Orthodox branch and has aligned with the Ecumenical Patriarchate of Constantinople, Turkey.  It was the first church we encountered that had changed allegiances according to its country’s history but not the last. 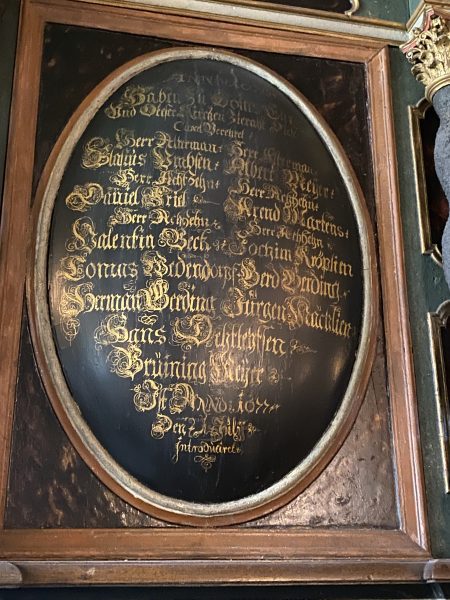 Names of Donors to ornate carved pulpit at St. Mary’s in Bergen 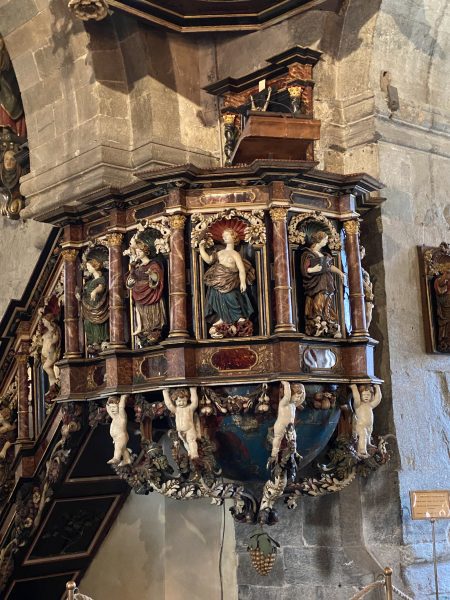 In Bergen, Norway, St. Mary‘s was originally constructed as a Roman Catholic church dedicated to St. Olav.  After the Protestant Reformation under Martin Luther came to Norway in 1539,  almost all Norwegians converted (willingly and not so willingly) and St. Mary’s became a part of the Church of Norway, a Lutheran affiliation. It is the oldest church in Bergen, surviving partly due to German merchants who dominated the community from 1408.  They displayed their wealth, using St. Mary’s for this purpose.  As our guide noted, we don’t know who carved the ornate pulpit, but we do know who donated for its construction.  Their names are listed in the church and a few paintings remain of individual donors.  Today, it still holds Lutheran services, but Anglicans meet on Sundays also. 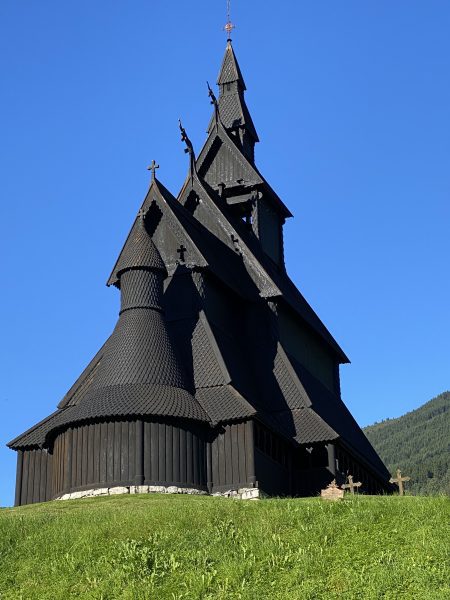 Norway is famous for its Stave Churches, striking in their design and age, and loved for their Viking history.  Despite TV series to the contrary, Vikings eventually converted to Catholicism but built their churches based on their woodworking skills and the attributes of their trees.  The distinctive black exterior was a result of tar from charcoal used to seal the wood. Layered roofs kept the snow weight distributed and carvings of dragons and snakes appealed to local belief in warding off evil spirits.  We took a ferry across the Sognefjord to Vik, and walked a mile to the Hopperstad Church, one of only 28 stave churches to survive, most lost after the 1349 plague. Hopperstad had to be reconstructed after extensive damage from deterioration and lack of care. Today, it is occasionally used by the Church of Norway, a Lutheran denomination.

As we approached the Trondheim, Norway Cathedral, firetrucks and ambulances circled the church with firemen in gear moving towards the church, lugging their fire hoses.  A cleric in robes noted our concern and assured us it was a drill. Considering the history of the cathedral and the destructive fires that had destroyed various parts of the campus over the years, I thought it wise to be prepared, especially with vivid memories of Notre Dame in Paris burning. 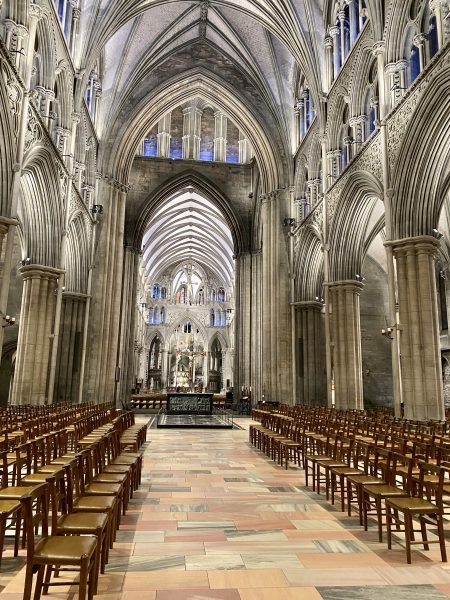 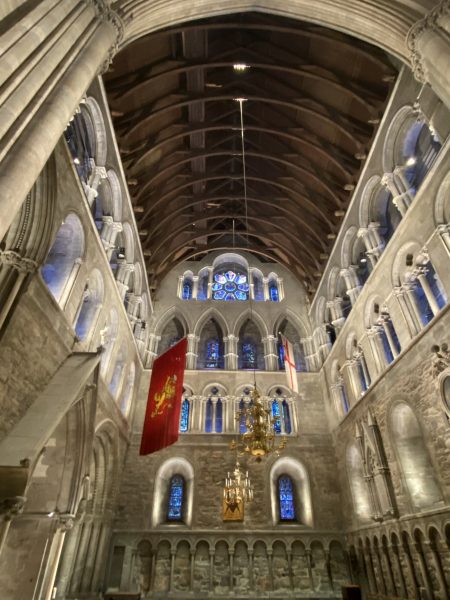 The cathedral has several claims to fame other than its beauty.  It was used for royal coronations and St. Olav, the patron saint of Norway, is believed to be buried on the grounds.  Of course, it began as a Catholic Church, changing allegiance after the Protestant Reformation.  Today it calls itself ecumenical, but the services are of the Lutheran order.  Recently restored (again), it’s as pretty a cathedral as I’ve seen.

Recognizing that many taxi drivers in Norway and Finland are immigrants, I asked one from Eritrea if there were any mosques in Bergen.  He acknowledged home mosques (meeting in a member’s home) were available, but the only permanent mosque was in Oslo.  An Ethiopian driver talked of the small Ethiopian community in Trondheim.  For their special occasions, they rent secular space.

I’ve seen a tiny mosque occupy commercial space in a medina in Morocco, an Episcopal church become a theater in Clarksville, and a synagogue occupy the lower floor of an apartment building in Jerusalem.  All these reflect the changing culture and needs.  The Scandinavian churches are no different.  Times change and churches follow.