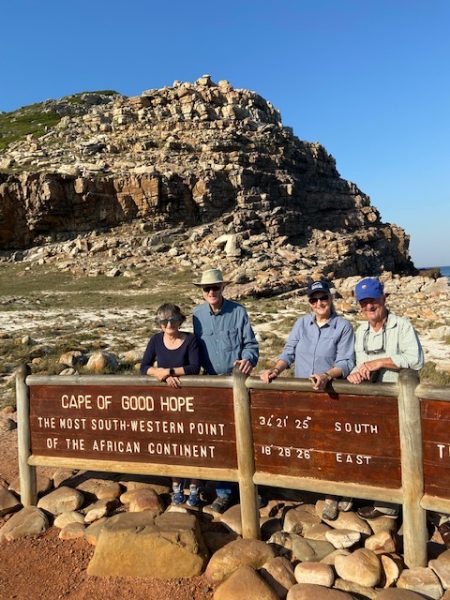 I’ve stood at the base of the South American continent and watched boats pass through the Straits of Magellan. At the bottom of Australia’s continent lies Melbourne, a charming city I explored more for its offerings than its location.  But to best experience the dropping off point of a continent, the Cape Point on the Cape of Good Hope in Cape Town, South Africa delivers with the vastness and loneliness of the Atlantic Ocean surrounding the peninsula on three sides.

The Portuguese initially rounded the Cape in 1488, but they didn’t tarry long. Later, the Dutch recognized the tranquil waters of the False Bay sheltered by the Cape as a good stopping point on their way to their riches in the Spice Islands.  They brought slaves from Malaysia to work their gardens and later rice fields that supplied food to the ships. The English also liked the Cape’s location for their expanding empire.  And, of course, there were the native Kwai Son-Koi people who had been in the area for centuries.  The Cape Peninsula and Cape Town became melting pots of cultures.

The drive around the Cape Peninsula requires two hours excluding an array of possible stops to appreciate the white beaches and blue waters, parks, rugged mountain terrain, and inland towns. Because of the relatively mild winter weather, the Cape is a popular place for second homes, including one owned by Leonardo DiCaprio.  According to our guide, South Africa is one of the most unequal countries in the world.  Passing around Haut (wood in Dutch) Bay, million-dollar homes overlooked $200 shacks without running water. 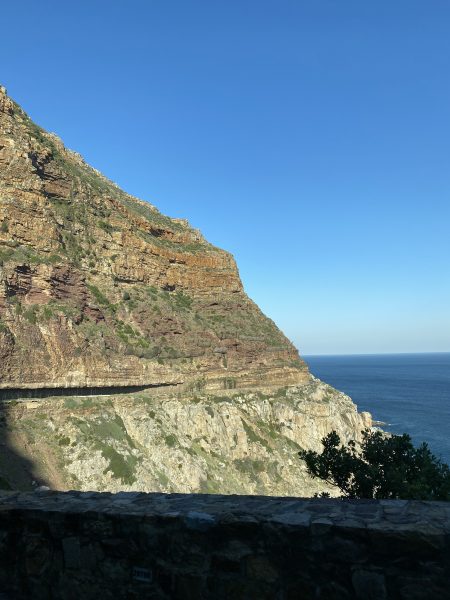 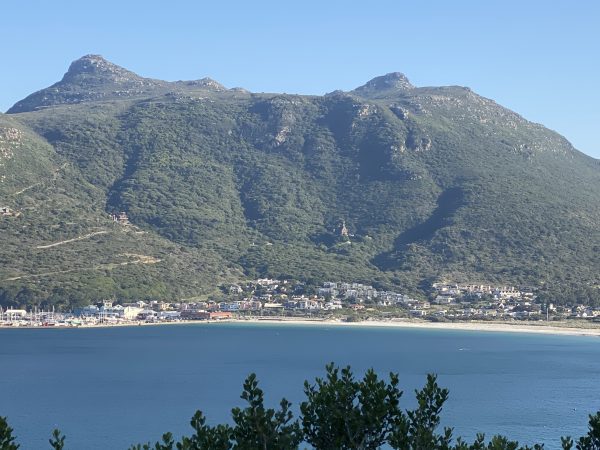 On a clear winter day that natives claimed to be like summer, we traveled along the dramatic Chapman’s Peak Drive named for a British sailor, hugging the edge of cliffs where the road had been hewn.  A surprising array of wild animals made their appearance – baboons carrying babies along the side of the road and wild ostriches and domesticated ones grown for their leather.  At nearby Seal Island, sharks could make a feast of the surfeit of seals.  Our guide called it a “McDonald’s drive-through for sharks.” 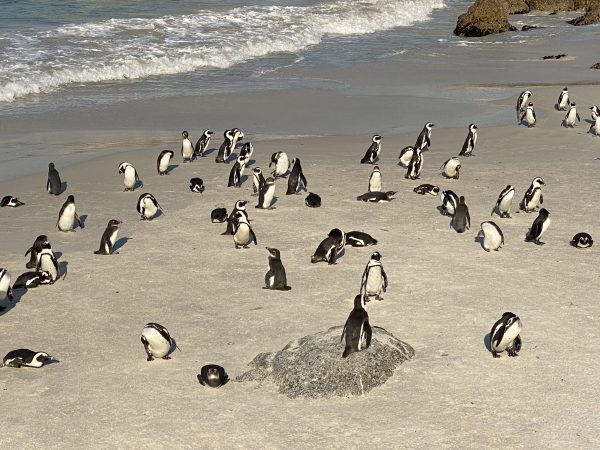 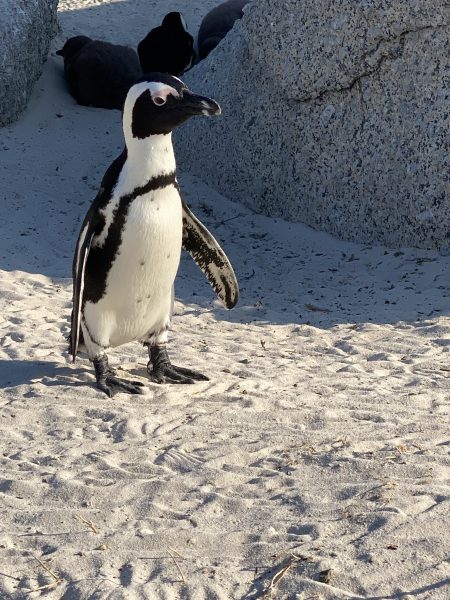 The most entertaining birds were the hundreds of African Penguins who just showed up at Boulder Beach in 1974.  An elevated board walk takes visitors to the beach filled with the waddling crowd.  There, an impatient mother pushed her mature baby penguin into the cold water again and again.  The baby would quickly circle around and dash out of the water.  Mom wasn’t having it and cut the baby off.  It was quite amusing except for the nearby sea gull that was feasting on a killed baby penguin.  I was startled at the indifference of the other penguins. 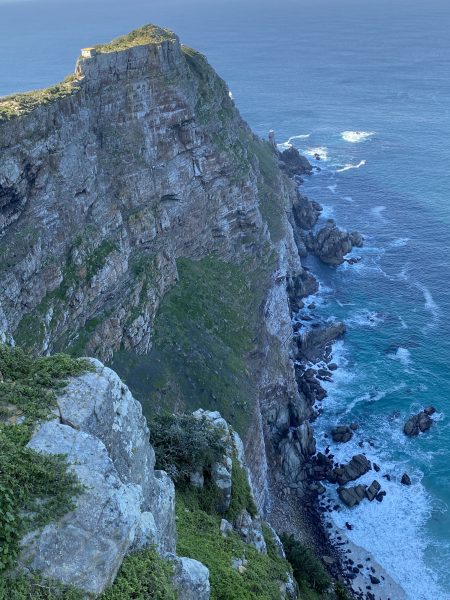 At the end of the Cape Peninsula is the Cape of Good Hope so named for the hope that the cape was the turning point east to find India from Europe.  After a funicular ride up to the edge of the Cape, we could finally view the Atlantic from three sides.  Below, a castle like fortress cliff extended even further with waves crashing against it and Black Cape Cormorant bird nests chiseled into its wall. 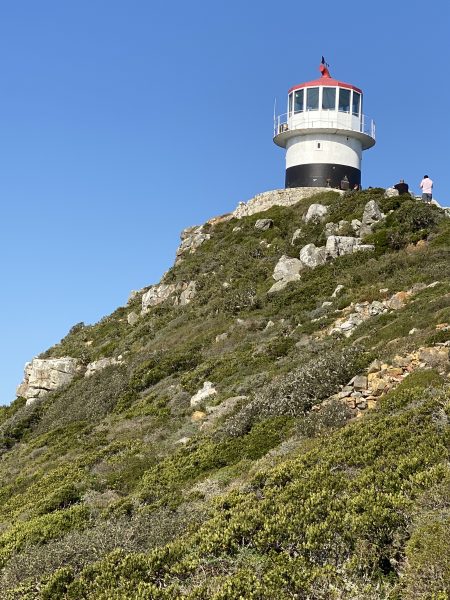 Behind us was the new Cape Point Lighthouse that functions today to orient ships.  The more traditional lighthouse remains standing but without purpose.  I could only appreciate the thousands of ships that have used the lighthouses over the years as a welcoming sign of a more tranquil bay just around the corner.

Contrary to popular opinion the Cape of Good Hope is not where the Indian, Atlantic, and Antarctic oceans meet.  That point is about 200 miles further east.  But it is the “most south-western point of the African Continent,” a fine title for a remote location. We had our picture taken in front of the sign proclaiming its coordinates.

On the way back into Cape Town, we passed through Simon Town, where a military base on False Bay houses the only three submarines owned by South Africa. False Bay received its name when sailors confused it with Table Bay to the north.  Because of its more tranquil waters, many communities were founded along its shores.  In Simon Town, policemen were protecting health care workers who manned an outdoor clinic giving COVID-19 vaccine shots.  According to our guide, vaccine doubters were numerous here.  Our final stop was for dinner at Fish Bait in Kalk (another Dutch name meaning chalk) overlooking a large marina filled with fishing boats and a sizeable seal looking for a handout. 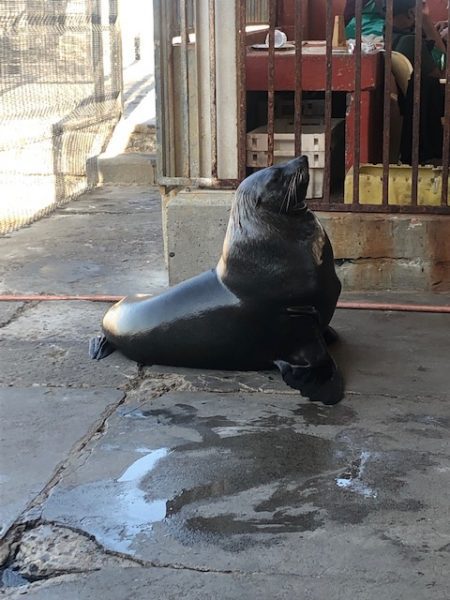 I hadn’t expected the wildlife.   The size of the Cape was larger than expected.  And I underestimated the satisfaction of being at the tip of a continent, imagining Antarctica 3,500 miles south, beckoning this traveler to explore her only remaining continent.