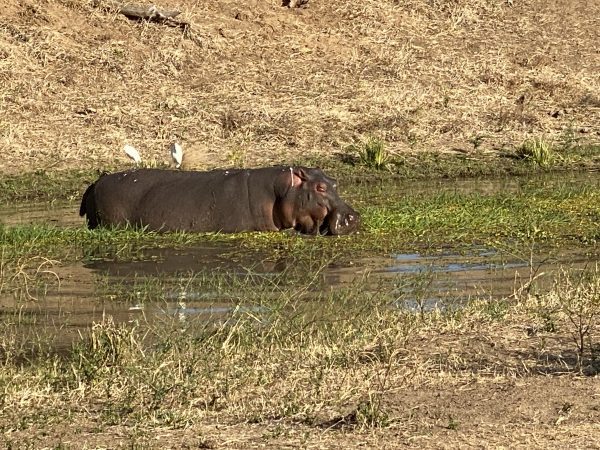 Hippo snacking below our tents at Mana Pool, Zimbabwe

In the spring and fall in Paris, I like to sleep with windows open, with an occasional owl’s hoot accompanying my dreams.  Only dogs barking interrupt the night’s peace.  Morning sounds expand with greetings from the local birds – cardinals, wrens, and robins.  Migrating birds announce their arrivals on schedule.  And cars and trucks from Loop 286 start their steady hums.  And, so, I was looking forward to hearing new night and morning sounds from inside our tents in Botswana and Zimbabwe on our photo safari.  What I hadn’t expected was the nocturnal hippo challenging my sleep.

We are all aware that a hippopotamus is described as a large thick-skinned semiaquatic African mammal, with massive jaws and large tusks.  I would put the emphasis on large, as it can reach two tons in weight and 5 ½ feet in height.  It rests in the morning, looks for food in the evening and night.  Its comparatively tiny ears stay out of the water as the hippo rests, never losing track of what menaces might be near. We learned to recognize the shape of the hippo heads that initially looked like black rocks protruding from the water.

What is missing from the dictionary description is the hippo’s easily identifiable sounds. The male honk is the loudest – deep with the lower decibels sometimes equaling 115 or the same as a rock concert or loud thunderstorm.   Other sounds contribute to a bass melody of grunts, growls, roars, wheezing and even what sounds like a deep laugh.  And underwater, a series of clicks communicates to other hippos through vibrations and are felt by their jawbones. From the night sounds, my perception of the hippos’ schedule included convivial happy hours of socializing through the night. 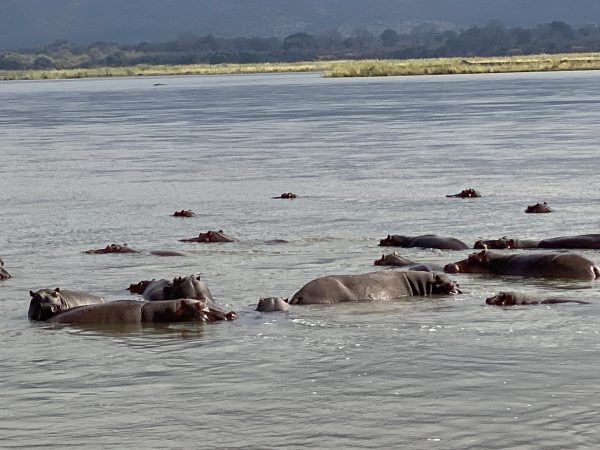 Raft of hippos on Zambezi River

At our first two bush camps in Botswana, the hippos as a group were relatively close.  But at the Zambezi Expedition Camp in Mana Pool National Park in Zimbabwe, our tent perched on the riverbank with a raft of hippos just below.  These plant loving animals scrounged for grass on land in the evening and night, returning to the water at some point before dawn.  After one late afternoon animal drive in the bush, we were stopped short of our camp by a couple of elephants and one hippo enjoying their herbivore snacks and slowly, very slowly, moving on to the water.  They passed within 10 feet of our tent. 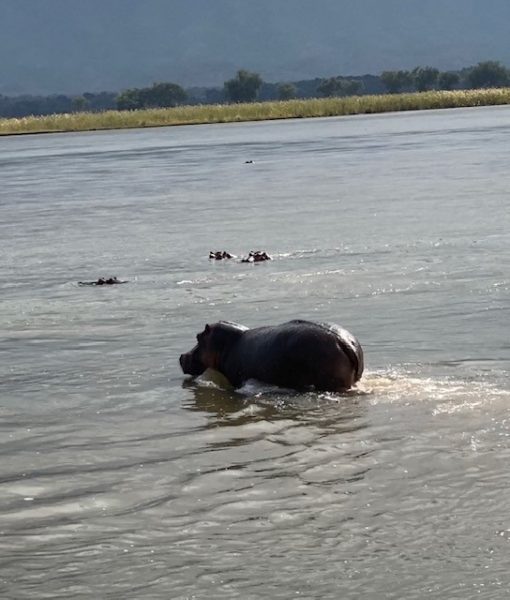 Hippo on the move

In general, the hippos we observed were safely in the water or ignored our presence.  The exception happened to my brother and his wife on a guided late afternoon canoe ride in the Zambezi River that separates Zimbabwe and Zambia.  Billed as a smooth, quiet ride in the water, it seemed a nice alternative to another game viewing drive on dusty, bumpy roads.  But on the way back, the canoes passed a little too close to a hippo who charged the canoe on land but stopped at the water.  Another (possibly mother)  hippo in the water felt threatened and began thrashing and swirling the water around her as she approached the canoes. The guide first held an oar above his head to appear bigger and then slapped the paddle flat on the water continuously as he shouted to “keep rowing.” It didn’t help to have just learned hippos were the most dangerous land animal in the world.  Gratefully, the boats returned safely and  all passengers looked tense but relieved.

The night in the African Bush is a busy time.  Many of the animals are nocturnal due to the heat of the days.  I learned to listen for elephant trumpets, lion roars, hyena laughs, and many, many hippo honks.  It felt as if we were sharing our bed with at least one from the chorus of hippos.  I delivered that line at the breakfast campfire and most laughed.  But our leader, who has been to Africa 50 times, admitted he loved the hippo sounds.  It meant he was in the wild and he found them comforting.

Back home in Texas, my night sounds now pale in comparison to the African Bush.  Our breakfast talk doesn’t compare what animals we had heard in the dark. We don’t look for footprints around the tent to determine what visitors we had in the night.  And no hippos join us in bed – a presence that I surprisingly now miss.

9 Responses to “Sleeping With a Hippo in My Bed”