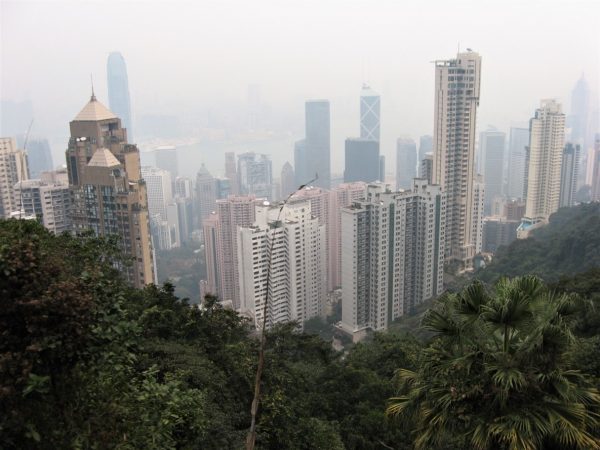 View of Hong Kong as The Peak Funicular ascends 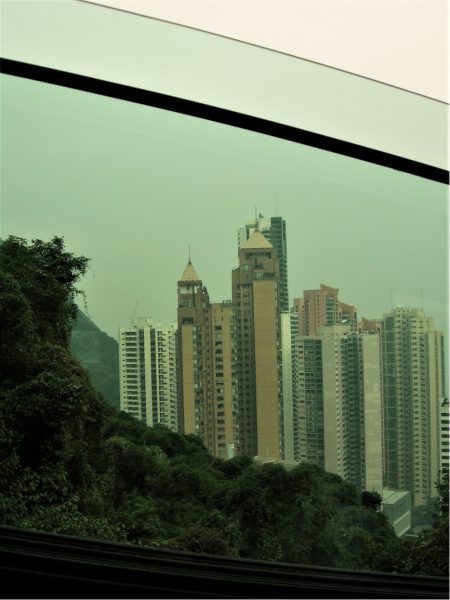 View of Hong Kong from The Peak Funicular through tinted glass

I don’t remember the first time I heard the word, “funicular.”  Inclined Railroad or an Incline are more widely used words for the steeply tilted contraption that lifts passengers quickly up to a much higher destination – a kind of mountain side elevator. The oldest funicular in the world continues to operate in Hohensalzburg Castle in Salzburg, Austria, known as the Reisszug, and has been in operation since the early 1500s.  The original funiculars transported supplies through the fortress doors of castles.

Destinations in the United States have included the top of a mountain, a hotel, an Amusement Park, Caverns, and the top of Bunker Hill in Boston.  The latter was the first American inclined railroad, built in 1826 to transport granite for the construction of a monument to commemorate the 50th anniversary of the Battle of Bunker Hill.

Truthfully, funiculars always make me nervous.  Even though the inclines today are run by electricity, many still clank and jerk at the start. The ascending car is hooked up to a moving cable and counterweighted by the car descending.  They move in tandem.  It is similar to the San Francisco cable cars, but those cars are not permanently attached to the cable and can start and stop on their own,

Surprisingly, the U.S. was once awash in funiculars with Pittsburg, Pennsylvania having the most – 23.  It was a steep climb from the Monongahela River up Mt. Washington where housing was located.  The steep, 635- foot Monongahela Incline built in 1870 is the oldest continuously operating funicular in the U.S.

For those few funiculars remaining in the U.S., most have become tourist attractions leading to other tourist attractions.  Sadly, the Royal Gorge Incline Railway in Colorado was closed in 2013 because of fire.  Lookout Mountain in Tennessee still brings riders up to the remarkable view that Confederate Generals James Longstreet and Braxton Briggs had the over the Lookout Valley during the Civil War. 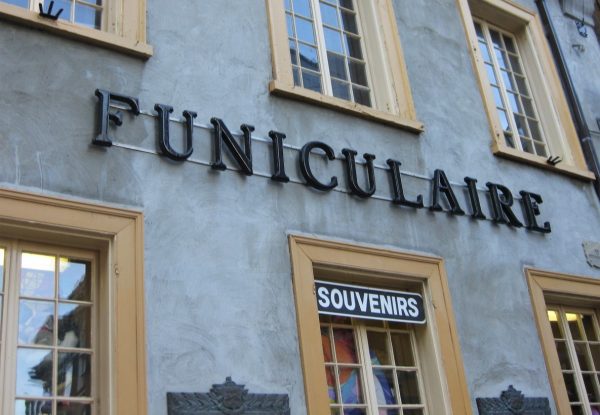 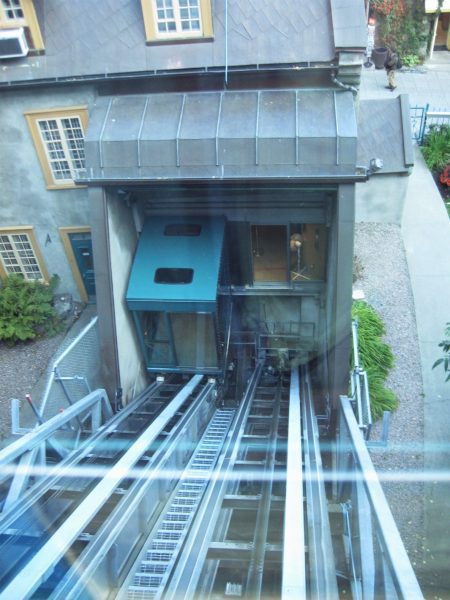 View of base of Quebec’s funicular 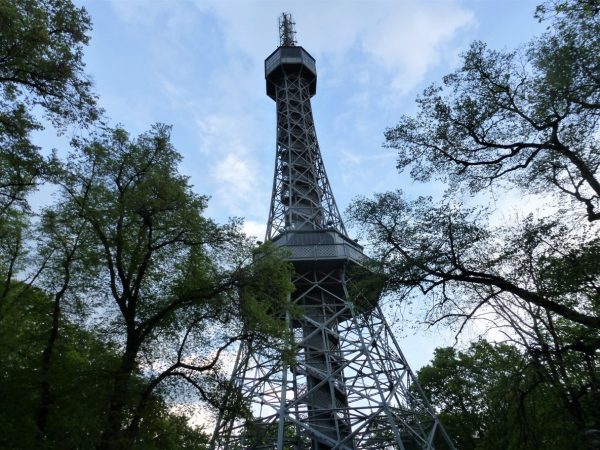 Tower at top of Prague’s funicular

Abroad there are many in unexpected places.  Chile’s port city of Valparaiso once had 31.  Naples’ Funiculare Centrale has been operating since 1928 and is also heavily trafficked. In Prague, a short funicular takes the rider up to a park with an Eiffel Tower in the center – minus the cowboy hat. Quebec’s old town funicular ascends from the river level to town center, moving tourists from a street of souvenirs to a row of restaurants.  Walking down the mountain to Old Quebec was easy but I was happy to jump on the funicular to ascend back to city center.

Orvieto, Italy, brings its visitors up a 134-year-old funicular with views of the valley below.  Popes liked to retreat to this ancient city for a respite even before the funicular provided easy access. My friends, Plug and Toni Clem, claim the restaurant at the top of the Orvieto funicular provided one of the best meals of their traveling experiences.  We both agreed the church above worth the ascent.

As could be expected, Switzerland heavily uses this form of transportation.  According to Wikipedia, the country has 53 operating funiculars, including the world’s newest just opened in Stoos.  The inclined railway transports passengers over 2200 feet (almost a half mile) in four minutes.  Barrel shaped cars rotate enough to keep the inside floor level.  I don’t usually experience vertigo but in a video promoting the opening of the incline in 2017, I felt my stomach drop watching the mountain disappear directly below on the 110-degree gradient.  It’s worth a look.

My favorite funicular ride was in Hong Kong.  The Peak moves residents from the business district to the top of Victoria Peak.  It has been serving Hong Kong since 1880, originally segregating riders into three categories: 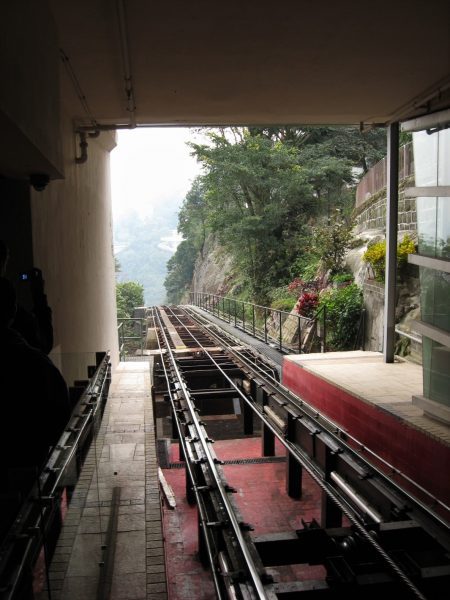 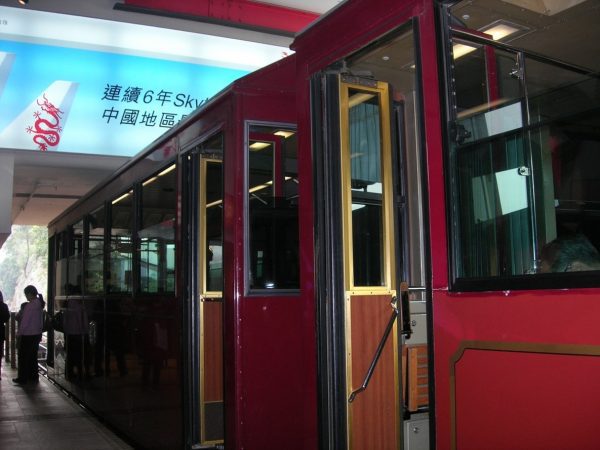 It is heavily used by locals and tourists and has had up to two hour waits on weekends to ride to the top.  Recent repairs and additions will speed up the ride and help with the overload.  What I can confirm is the view going up was stunning, taking in the bottom half of Hong Kong Island directly below.  Skyscrapers gave way to ferries in the distance crossing Victoria Harbor to hotels lined up along the waterfront on Kowloon Peninsula.

Since so many funiculars have been abandoned, I think it important to ride those still available.  The views are always notable and the experience important to understand past transportation options.  I hear there’s one in Bergen, Norway – a fall destination.  I hope to check it out.