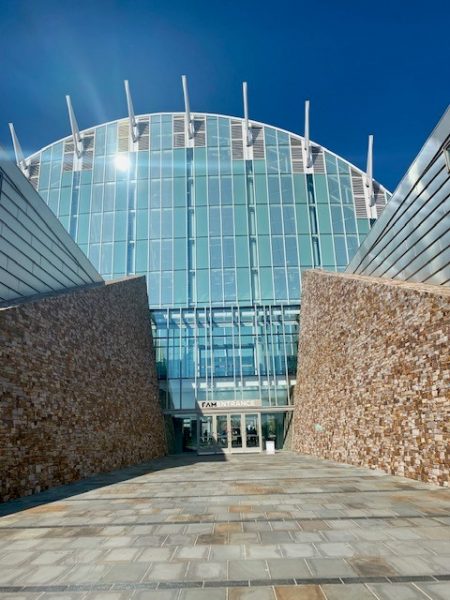 East facing Entrance to museum aligns with the sunrise of the March vernal and September of the autumnal equinox.

The First American Museum (FAM) https://famok.org/ in Oklahoma City was a long time coming. Since Oklahoma has more than 60 percent of all enrolled Native Americans in the U.S., OKC was the natural location for such an ambitious project.  Initially conceived in 1994 to fill a need to tell the stories of the 39 Native American tribes in Oklahoma, the legislature created the Native American Cultural and Educational Authority but without funding.  It took 27 years before the museum opened thanks to monies raised from private donors, the State, City of Oklahoma, and the Chickasaw Nation.  With appropriate fanfare, the museum opened in October 2021 to the delight of tribal members and impressing national architects, museum critics, and the general public.

The FAM is not centered around a collection of artifacts.  There is no dusty diorama of Indians in native garb hunting in the desert.  What has survived of the sad history of the original four tribes in Oklahoma and the removal of 35 tribes to Oklahoma from other parts of the United States along the Trail of Tears are the stories.  As noted by a museum curator, the museum is “Our place to tell our stories from our perspective.” 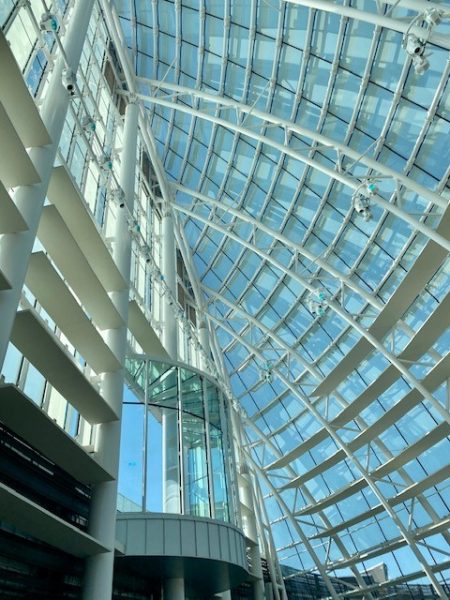 Beginning with an animated surround sound video of the creation stories,  histories of the tribes are gradually revealed in galleries filled with historical data and family tales. Genocide, forced removal, boarding schools, and the unusual allotment history of the Oklahoma tribes are sad parts of their history. The number of treaty betrayals by the U.S. Government is achingly presented along with the statesmen of the tribes.  Later galleries celebrate achievements in the art, science, military, and sports worlds.  An imagined ride on a bus takes you to a current day pow wow. And upstairs are artefacts from the Smithsonian in Washington that have been rescued from storage and brought to life. 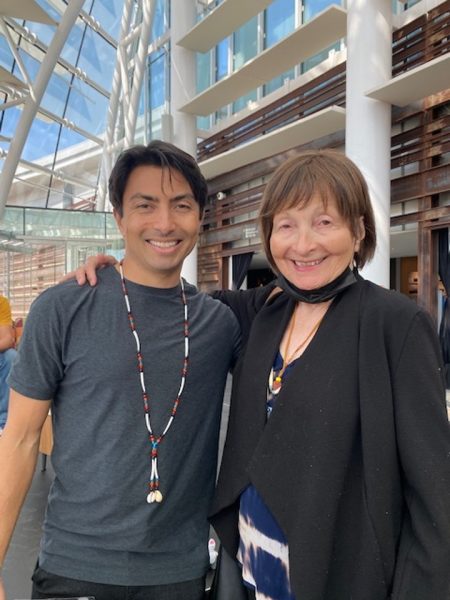 All this is well worth the visit.  But we recently also experienced the world premiere of “Distant Thunder”, a musical penned by Native American mother/son duo, Lynn Taylor Corbitt and Shawn Corbitt, members of the Black Feet tribe.  Presented in a section of the enormous parade ground behind the museum building, it was buffered by one of the country’s largest earth mound, modeled after those built by southern tribes and aligned with the cardinal directions of north, south, east and west. The musical tells the modern-day story of so many Native Americans who are torn between tribal traditional support and going “where the jobs are.”  Fractured relationships heal as the prodigal son returns to learn the truth of his past.

At a cast/audience talk after the show, members of the Native American cast talked of the musical bringing them closer to their roots and many used the experience to heal wounds from their own pasts.  Representing tribes from Oregon to NYC, the cast hoped the musical would become their West Side Story that had illuminated the Puerto Rican experience or Fiddler on the Roof and its Jewish journey.

Shannon O’Loughlin, CEO and attorney for the 100-year-old American Association of Indian Affairs was the MC for the talk. She noted that their organization is celebrating 100 years of advocating for the tribes to be self-determinate.  In the beginning, they had to deal with forced boarding schools and the forbidding of the use of native language.  Today, they continue to advocate for taking back artifacts on museum shelves and teaching tribes how to use their treaties.

Writer Shawn Corbitt, admits the story of “Distant Thunder” is his story. Much of the plot stems from a trip he and his mother took to the Blackfeet Nation in Browning, Montana, when Shaun was 15.  He grew up on Long Island and was hungry for his Black Feet heritage.  He now returns for their annual ceremonies.  The Old Man in the play, Brent Florendo, is from Oregon and teaches Native American studies. Matoka Little Eagle, who played Grandma Jingle Dress, talked of her father being sent to a boarding school and running away every Thursday when the school staff would bleach their skin. She was taught to be a dancer even in the north where she was raised. 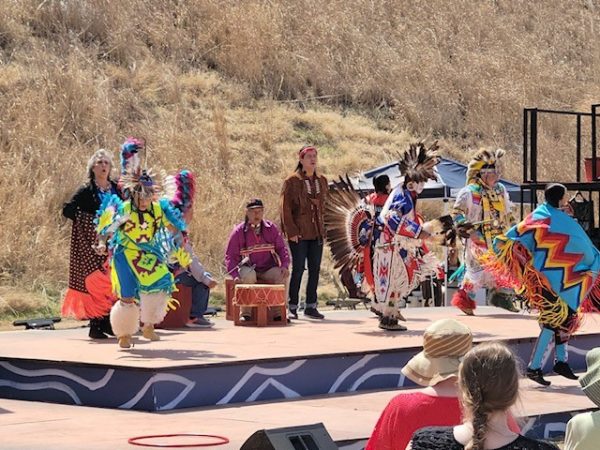 Xander Chauncey, of Shawnee and Mapuche heritage played the veteran who suffered from PTSD but noted it was also his own personal story. Native Americans have served in the military at five times the rate per capita of any other group in the U.S.  The play touched on energy company pipe lines, gaming, economic development, and global warming. Tribal dancing and poignant songs contribute greatly to the show’s authenticity.   And the actors agreed that its dominant theme was forgiveness.

The First American Museum is well worth a visit to learn of the past and present tribal life.  Hopefully, “Distanct Thunder” will join the musical circuit and more can understand the modern day Native American experience.