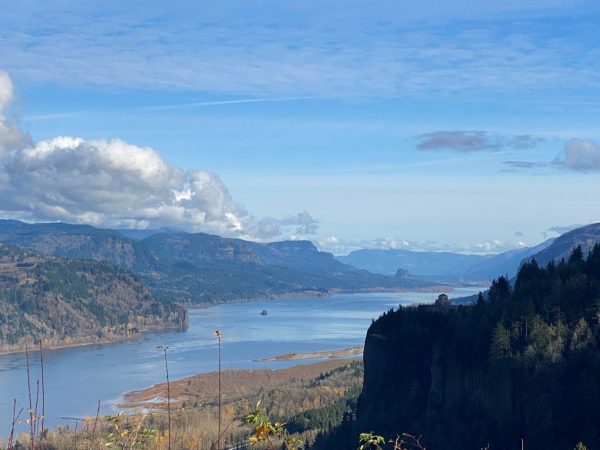 The Oregon Trail was one of the first video games to come out in the late 1970s, introduced to our family in the 1980s. In a rudimentary form, it followed the actual Oregon Trail and required a pioneer player to make life and death decisions as their wagon pushed across western America from St. Louis to Oregon. There were hazards along the way and it was the lucky player who arrived at the Columbia River Gorge.  I was the lucky one to visit on a beautiful December day with my Oregon friend.

Before Lewis & Clark showed up on their 1805 expedition to the Pacific Ocean, native Americans lived along the Columbia River which at the time was filled with strong winds and the wildest rapids of the explorers’ trip. Today, violent winds generated by warm dry air from eastern Oregon still collide with cooler air from the west, but the rapids have long been tamed by dams. A scenic four lane highway now follows the river, but one can still experience some of the sense of discovery that Lewis & Clark and the settlers must have felt. 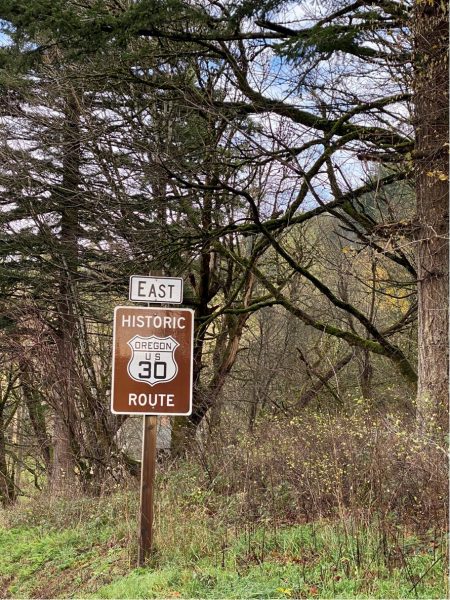 From the western side, a small U. S. Historic Route 30 Highway follows high above the river and offers panoramic views of the rock gorge and of the numerous waterfalls that were noted by Lewis and Clark.  There are over 90 waterfalls on the Oregon side with some of the most spectacular ones just along the highway.  The longest is the 620-foot Multnomah at the road’s edge that sports a stone bridge halfway up the falls.  But my Oregon friend and I preferred Bridal Veil Falls that required a short hike in to view and had a smaller crowd. 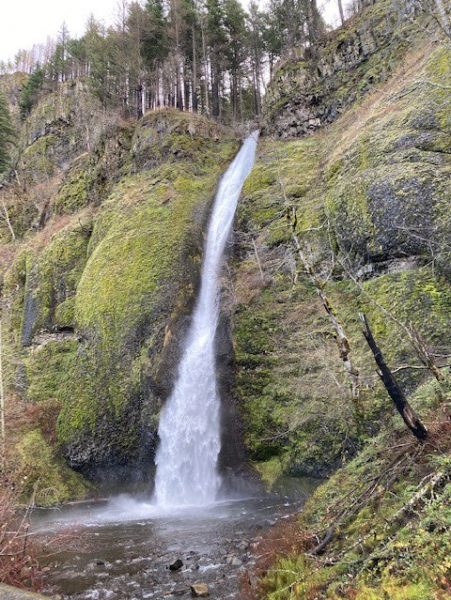 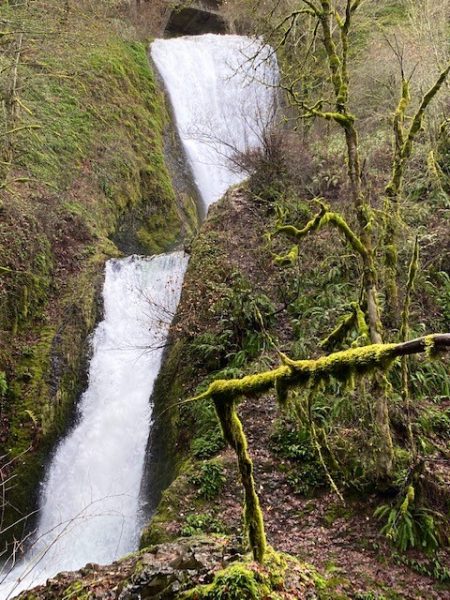 The falls still empty into the Columbia River as they did over 200 years ago, but those waters are now controlled by numerous dams.  Thanks to a series of locks, the river is easily navigable for larger barges and even smaller personal boats.  Websites are available to explain to boat owners how to maneuver through the Bonneville locks. 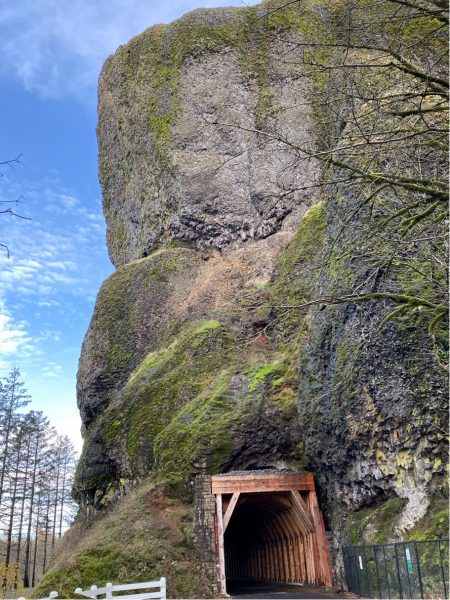 A railroad used to traverse this route and an old tunnel has been cleaned out to illustrate the train’s past presence.

We took advantage of a 1926 Truss Cantilever bridge with a toll of $2 to take us over to the Washington side.  From there the southern canyon rock walls were clearly visible.  As we followed current railroad tracks, the height of the gorge diminished and suddenly, there in the distance stood the 11,000-foot-tall Mt. Hood – bathed in later afternoon light with its snow covering reflecting the colors. 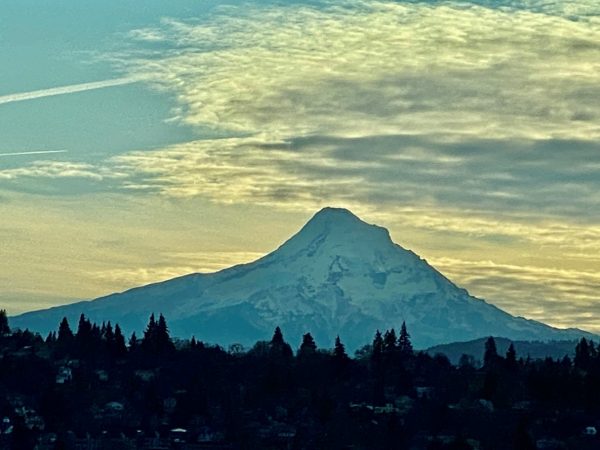 Lewis & Clark had similar reactions the first time they saw that magnificent mountain from the river – a sharp intake of breath at its wonder.    We continued to get glimpses of the mountain as the day ended.

Another crossing of the river on a second $2 toll historic truss bridge narrowly built for horse drawn carriages and Model Ts took us to Hood River, Oregon, a small but lively outdoor sports destination for boaters, paragliders, hikers, and skiers.  It was quiet in December but still had beautiful B&Bs and gourmet restaurants open.  I could have stayed longer.

The next day, we took the highway south that curves around Mt. Hood.  Parts of this highway into the Portland area follow the old Barlow toll road, built by Sam Barlow and Philip Foster in 1846.  This road was an option in the Oregon Trail video game and in real life.  Since the Columbia River rapids were dangerous and there was often a long line of wagons waiting their turn on the river, Sam Barlow saw an opportunity for another safer route inland.  However, it was a toll road and in the video game, you may or may not have landed there with enough money to pay the toll, a true dilemma for early settlers. 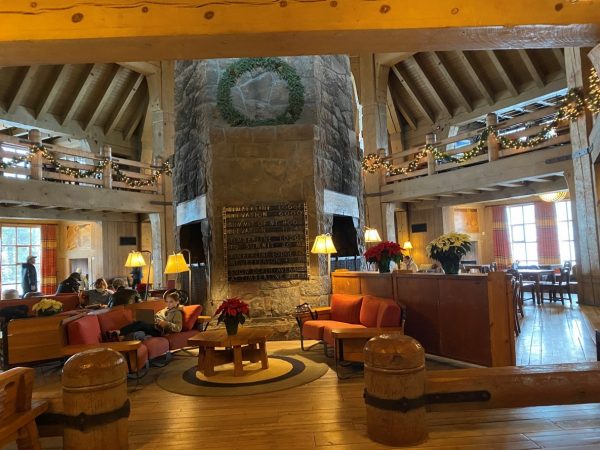 The new highway works its way around the massive Mt. Hood, and we took the opportunity to visit another crown jewel of the Rockies – the Timberline Lodge, built in 1937 in Cascadian architecture.  With man-sized fireplace openings and wood carvings throughout, the hotel is worth the small detour from the highway.  Sadly, fog obscured the view of the ski area and valley below filled with its other snow-covered volcanoes.

As we returned to Portland, the highway followed or crossed the old Barlow Toll way until landing us in the beautiful and bountiful Willamette valley – the true destination of the Oregon Trail settlers.  Those who made it were fortunate.  In playing the video game as in true life, one would often lose a family member to dysentery or infection or drowning in a river.  Luckily, those are not perils today and we can simply enjoy the same stunning scenery that greeted Lewis and Clark and the pioneers. Only the weather remains untamed.