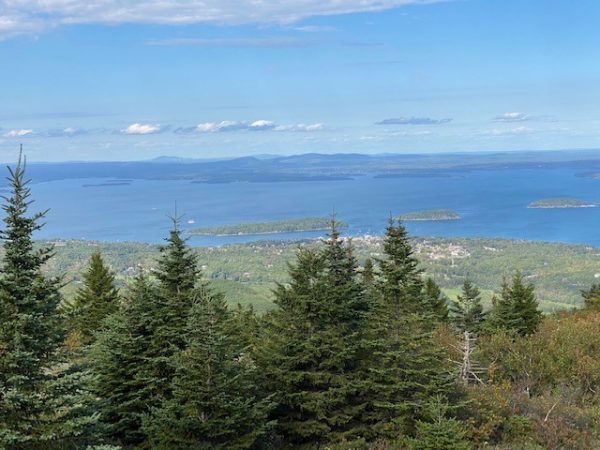 Maine is not exactly on the way to anywhere for Texans except Maine itself.  It’s the end of the road in the U.S. Northeast and not easy to get to whether driving or flying.  Because of its isolation from most of the country, it has retained a unique laid-back charm.  As our Portland guide indicated, the state of Maine is all about simplicity, a notable reason it feels like a different world.  Their economy centers around only four industries, starting with tourism.

Despite its isolation, Maine attracts thirty million visitors a year.  Let’s put that number in perspective.  First, there’s only 1,350,000 “Mainers,” a diminutive state compared to Texas’ almost 30 million inhabitants.  This means for every Maine resident, there are 22 visitors.  If that same number were applied to Texas, we would get 650,000,000 visitors each year and Lamar County would entertain over 1 million.  Those numbers are staggering to think about and require appreciation for Maine’s ability to maintain its beauty and charm amongst the visiting throngs. 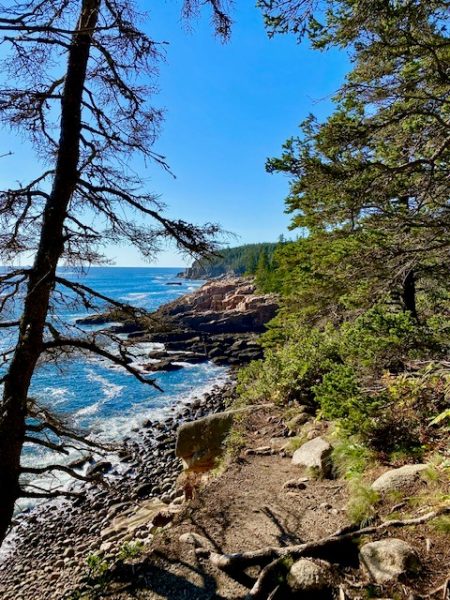 A trail along the ocean side in Acadia National Park

The beauty of Maine is spread throughout the state with most vacations concentrating on the rocky coastline, but the mountainous interior can hold its own.  I had long wanted to visit Acadia National Park, the crown jewel of National Parks.  Whether walking along its coast with the deep blue ocean contrasting with the green forest path or driving to the top of Cadillac Mountain with its 360-degree view of the island’s lakes and mountains, Acadia didn’t disappoint.  The iconic photo is of the lighthouse at Bass Harbor did prove to be elusive.  To get the full view required maneuvering long stairs and large boulders.  I had to settle for the partial view – an acknowledgment of my advancing age.

The fishing industry, especially for lobster, is known around the world.  Lobster traps with their brightly painted buoys are seen all along the coast.  The 600 lobster fishermen are a close-knit group, and they know whose traps belong in what parts of the ocean.  There’s no written agreement amongst them on their territories – a fall back to the hand-shake, simpler times. There are observed rules on which lobsters can be kept and which must be thrown back.  Because of a past unpleasant reaction to eating lobsters, I didn’t partake of this most popular of Maine foods, but I did enjoy the other fresh seafood offerings.

Ship building is an unexpected industry, harking back to the establishment of the city of Portland.  The town began in 1786 as a convenient ice-free deep-water port close to Europe to ship goods from Canada and the U.S. to England.  Boats were needed and wood was plentiful.  Until the separation of the U.S. from England, any pine tree greater than 24 inches could be harvested for “the Crown” to be used as a boat mast, regardless of whether it was on private property or not.  A Royal arrow mark would be placed on the tree to be confiscated.  Today, there are still 200 ship building firms in Maine, primarily for fishing but luxury yachts are also constructed, mainly for Europeans and Middle East residents.

Maine has an inordinate number of natural farms, producing organic vegetables and fruit that are used in the famous restaurants spread throughout the state – it is a foodie destination. Among our favorite foods were the “duck frites” or French fried potatoes cooked in duck fat.    We missed the blueberry season that yields the most blueberries in our country, but pies and jams were still available.  Maine is the number one producer of maple syrup and we noted and savored the generous portions of syrup served with our breakfasts.   Add in the wood and paper products created from the forests and you have the fourth industry generated by the land. 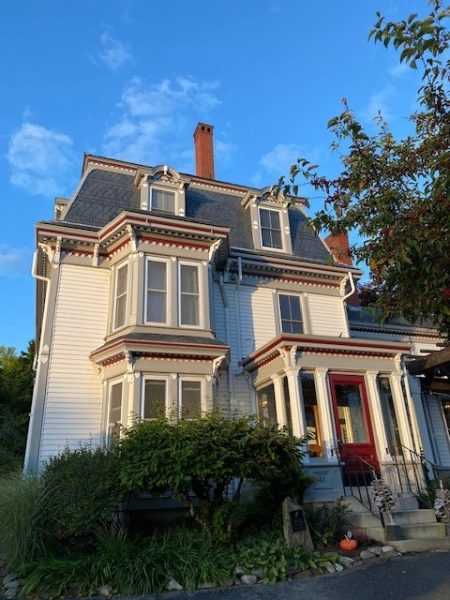 Hartstone Inn – a bed and breakfast in Camden, Maine 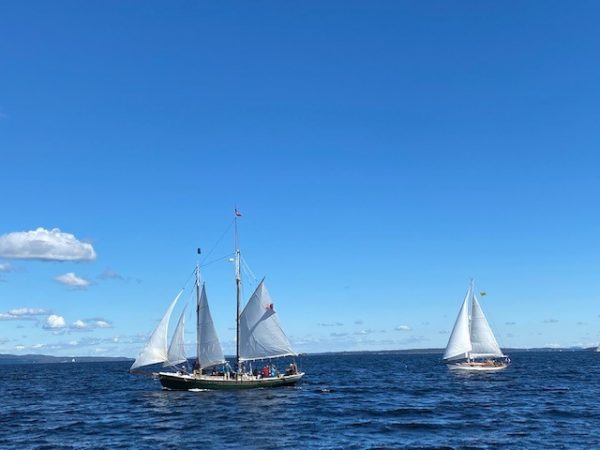 Two of thousands of sailboats along the coast of Maine

The simple life is reflected by the activities along the highways and coast – Quaker meeting houses, a Sculling Lodge, Unitarian/Universalist Churches, clams, mussels, and cherry tomatoes for sale, lack of feeder roads along the freeways and thousands of small sailboats in every harbor.  Chain hotels were few with more charming bed and breakfasts readily available.  And their most popular store is not for western wear but carries hiking and camping inventory at the unusually large L.L. Bean in Freeport.

The hardest part about a visit to Maine is deciding where to go on a limited vacation time.  A friend posted on Facebook about this dilemma and asked for suggestions.  There were many.  We only stayed in Bar Harbor, Camden and Portland.  But my observation is that you simply can’t go wrong, wherever you choose to visit.  The crowds may be there but somehow the beauty shines through.  You just have to get there.

One Response to “Maine – A State to be Savored”