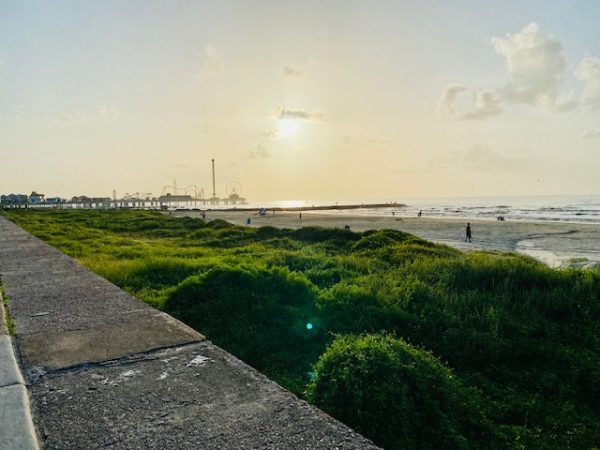 I am not my family’s historian and have yet to joined Ancestry. Unlike many genealogists, I have never traveled to research past connections. Two brothers had their saliva analyzed for past relations which confirmed we are strongly connected to the British Isle and Ireland.  For the rest of my background, I have relied on family trees produced by my older brother and some cousins, and family lore.

It was the family’s Galveston 1900 flood story that I grew up hearing that has always intrigued me.  While thousands died in the worst hurricane in American history, my great grandparents survived, moved to Houston and then to Plainview, Texas where I was born 50 years later.  On a trip to Galveston recently for a wedding, I dug deeper into the story to determine if any evidence remained of my family’s past there.

The 1900 Hurricane (named for its date rather than a person’s name) is infamous as the deadliest national disaster in American history.  The estimate of lives lost is 8000 out of a population of 37,000 – almost one in four and three times the loss of any other American hurricane.  There were warnings of the approaching storm on September 8th, but they were either ignored or not widely spread.

I can only wonder if my great grandparents were aware of the pending disaster.  The story passed down through four generations is of my great grandfather and their oldest son spending the night of the hurricane in a school and my great grandmother and two of their children (including my grandmother) moving up the stairways in a nearby home step by step as the water rose.  She was at the last landing of the two-story home when the water crested and began to recede.  Neither of my great grand parents knew if the other had survived until the next morning.  Since most of the city’s buildings were destroyed, my family quickly vacated Galveston. 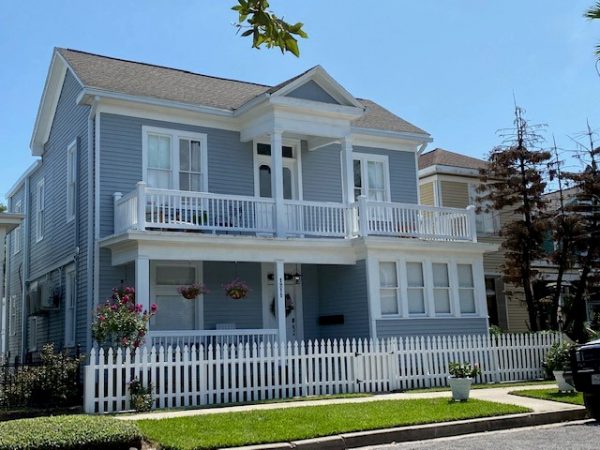 My great grandparents’ home in Galveston that weathered the 1900 storm

Thanks to a 1900 city directory, I was able to locate my great grandparents’ home on Winnie Street.  It still stands and has a diamond shaped marker on the outside indicating the home survived the 1900 storm, but it is now divided into four apartments.  I rang the doorbell but was unable to rouse a renter.  The Rosenburg school is still a block away but has been rebuilt.  I was also able to find the home of my great great Uncle Jeff.  Other prior family homes have been absorbed by the Galveston Medical Center, near Big Red, home of the original medical school.  My greatgrandfather’s grocery store is now an industrial electrical site.

Galveston’s reputation as the city who has survived the most hurricanes has generated a tourist industry complete with a “Hurricane Tour” which we took.  In air-conditioned comfort, we learned the history of the seventeen-foot sea wall, built to protect the island after the 1900 hurricane.  The need for the wall seemed obvious but it was the raising of the structures of the entire town that was most impressive. Home and businesses were lifted by hand turned jackscrews while sand from the ocean floor was brought to fill in the space created.  Structures nearest the water were raised the most, gradually tapering off across the island. 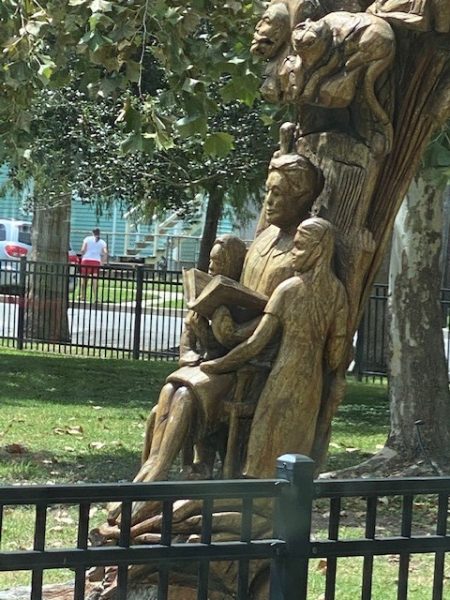 One of many wood carvings from lost trees from Hurricane Ike

Downtown on the Strand is a building with lines indicating the height of each storm surge, always the deadliest part of the storm.  The sea wall did its job until Hurricane Ike which came from a different direction and caused a surge of 19 feet.  On the tour, the driver pointed out unique wooden carvings in yards where trees had died from Hurricane Ike, a creative response to the disaster. 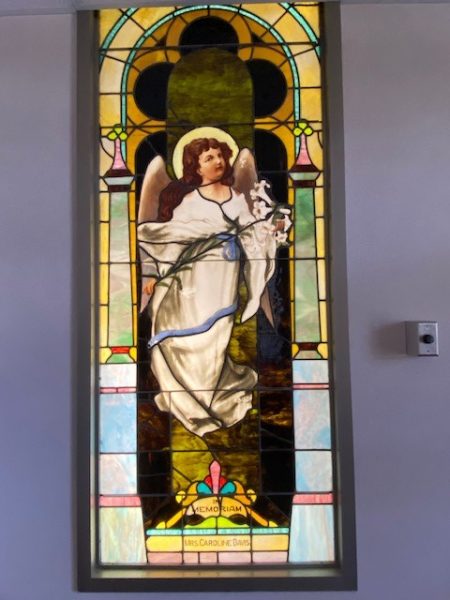 The bonus in this forage into family history was the Moody Methodist Church, a large church built in 1962 thanks to a generous bequest from Libbie Moody.  My early family attended St. James Methodist Church, a predecessor of the Moody church.  Another family story was of a stained-glass window at St. James dedicated to my great greatgrandmother, Caroline Davis.  The receptionist at the front desk of the Moody church, though, was not aware of any preserved stained-glass window from the old church but offered to show us the sanctuary.  At the doors into the inner church, she glanced to her right and pointed out one stained glass window that she had forgotten about.  And, there it was – a lovely white robed angel holding lilies with a dedication at the bottom, “in Memoriam, Mrs. Caroline Davis.”

I’m confident few in the large Moody Methodist Church have paid much attention to this old stained-glass window but for me it was the strongest connection yet to a family history that launched my eventual presence in Texas. And I must now admit – family history trips have much to give.