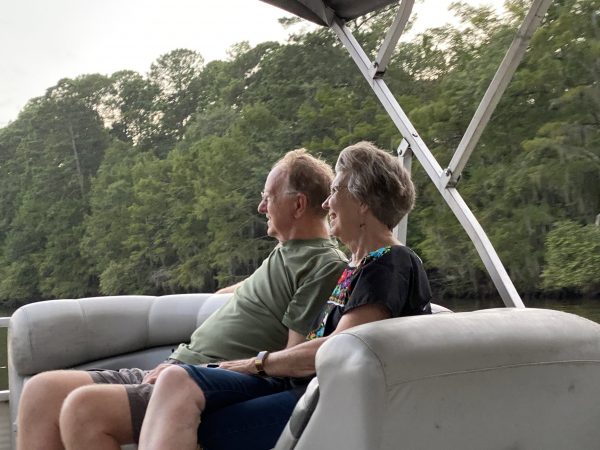 The Fiftieth wedding anniversary is traditionally a golden one.  For many couples, this would mean gifts of gold jewelry, an anniversary party or even a trip of a lifetime.  But for our good friends, Paul and Betty Swasko, theirs was celebrated with Captain Ron and a trip through Caddo Lake, where, according to its website,  it’s “not just a ride but an experience.” Thanks to a long friendship, my husband and I were invited to join in the adventure.

The Swaskos’ daughters are clever and wanted to honor their parents who met during college in Greece on World Campus Afloat, a university on a ship that stopped at countries around the world.  To recreate a water experience in East Texas took some imagination but they tracked down Captain Ron’s Swamp Tours at Caddo Lake and booked a late afternoon cruise through the bayous.  To add a hint of Greece, they ordered food to go at the Austin Street Bistro in Jefferson which included a Greek salad – a bit of a stretch but all delicious at the picnic table next to the lake.

Caddo Lake, named for the Caddo Indians who were early inhabitants, has long been mysterious to me.  It feels more like a swamp that became a lake thanks to a dam.  It is the largest freshwater lake in Texas. Captain Ron pushed our pontoon boat off the dock and we traveled a short distance down the deep Big Cypress Bayou before turning into a shallow lake world.  He explained the geological fault formation below us where a plate pushed up against another plate, forming bluffs on one side of the lake and flat land on the other. 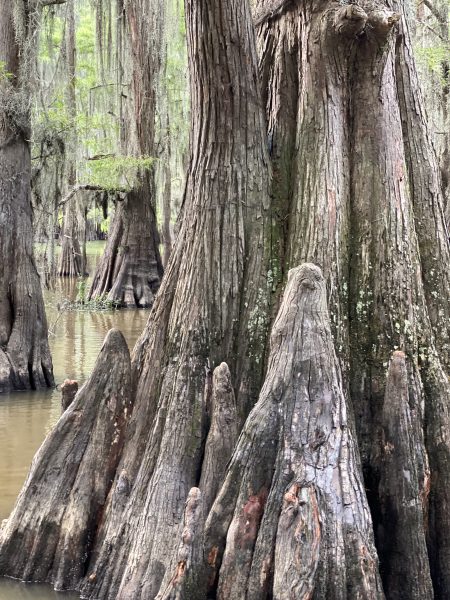 Base of Bald Cypress Trees in Caddo Lake 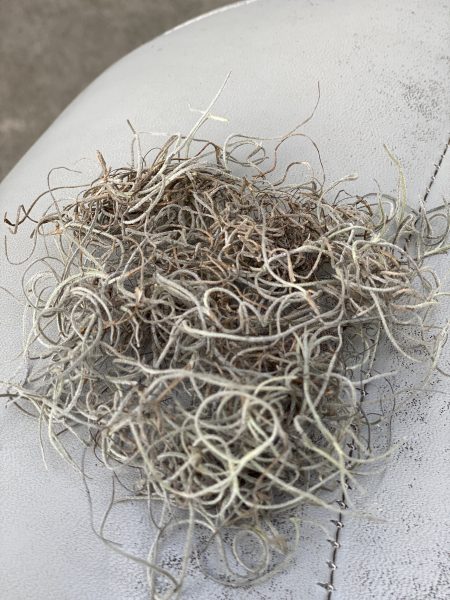 Moss off of Cypress Trees – appear dead but revives with water

A good guide always makes a scene come alive and Captain Ron had many stories.  Inside the lake, the distinctive bald cypress trees (bald because they shed their leaves in the fall) with their knobby knee base anchored in the water, were indicators of four to six feet of shallow water.  Over 2,000 years ago, Caddo Indian canoes were shaped from these trees. In more recent times, the hanging moss stuffed the seats of Ford Pick-up Trucks and lumber from the harvest of the trees was used for beams in the downtown McKinney, Texas buildings that are still in use.  Best of all, the smell of the sap of the trees keeps mosquitos away. 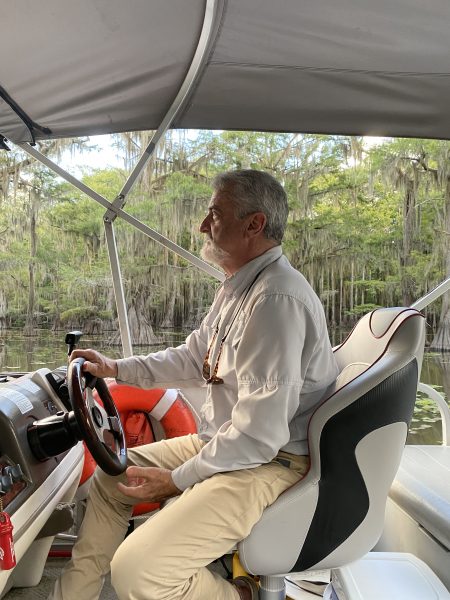 Nonchalant about the possible presence of alligators, our leader assured us they were as scared of us as we are of them.  We should be grateful as they love to eat snakes, keeping that population down.  Turtles are also victims, but Ron convinced us their population needed to be controlled.

My favorite stories centered around the use of the swamp to hide moonshine stills, a busy and lucrative business during Prohibition.  It was so accepted by the local population that Black Tie affairs were held with guests arriving in boats for evening dancing and drinking.  All guests were instructed to listen for approaching boats in case the liquor had to be spilled quickly to avoid discovery by law enforcement.    Owning a moonshine remains illegal under federal law.

The strangest scene on the trip was the discovery of a two-man black submarine on the bank in front of Pine Needle Lodge, recently purchased and scheduled to be renovated.  It must have been a deal as navigating a submarine in such shallow water seemed unlikely. The lodge hopes to be a launching spot for canoes and kayaks.

Captain Ron wanted to be certain we appreciated the stillness, even shutting off the boat for a few moments of uninterrupted quiet, noting there was no freeway noise anywhere near, an observation more appropriate for his city clients than us. 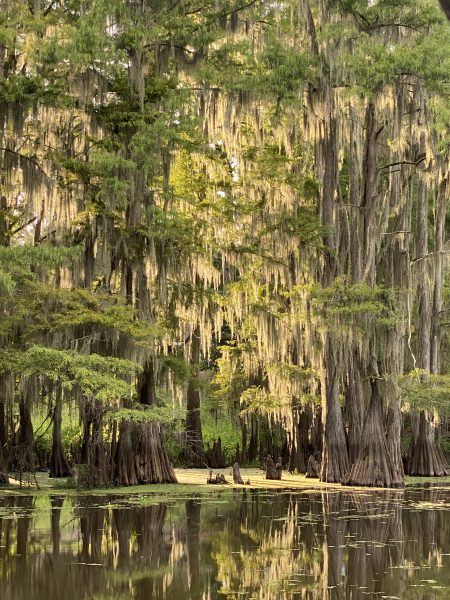 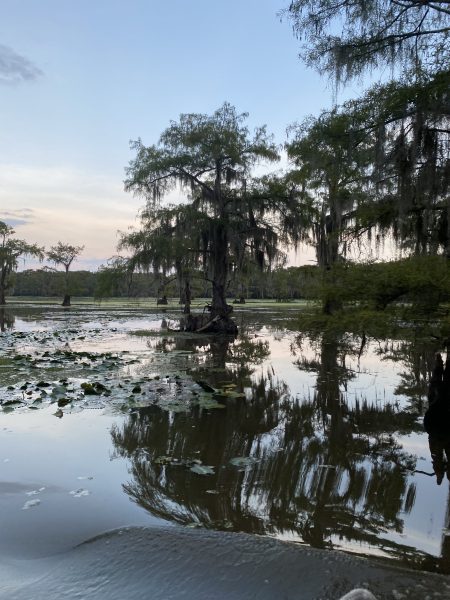 Because our trip was late afternoon, sun rays separated as they passed through the trees and into the water.  The soft light allowed perfectly composed photos with the water providing mirror images of the trees.  Captain Ron continually exclaimed, “Ya’ll.  Isn’t this beautiful?”  His excitement reminded me of the biblical injunction, “Behold”, meaning look again, really see, take it all in, pay attention. Even after five tours a day on weekends, he had not lost his wonder at this natural lake.  It was easy to be caught up in his excitement and it certainly provided a lovely backdrop for a most unusual 50th anniversary celebration.  And for their 60th ?  Who knows?  Maybe we can catch the full moon ride through that dreamy world apart from every-day life.