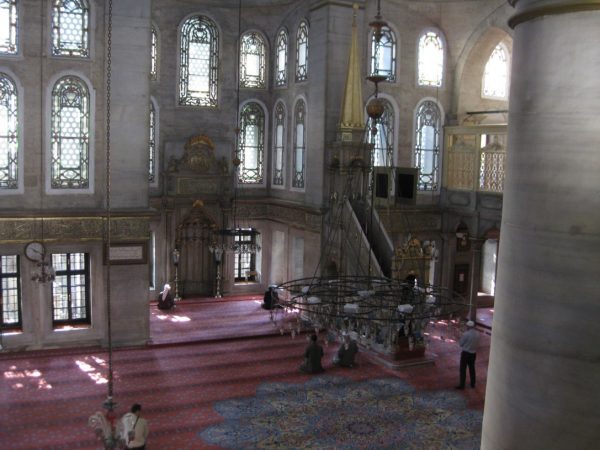 Inside Eyup Mosque in Istanbul, Turkey

Ahmet, our Turkish friend, insisted we were welcome in the Eyup Mosque of Istanbul, Turkey, even though we were not Muslims.  He wanted us to experience one of the many local spiritual centers of Islam and only required that my friend, Mary Grace, and I cover our heads.  We entered through the women’s section in the balcony and could observe supplicants below.  It was between the five required calls to prayer and yet there were men praying on their knees, occasionally bowing to the floor, coming and going as they chose, an experience similar to the activity in a European cathedral.

Inside a mosque, a feeling of spaciousness prevails as there are no pews or chairs but most often a thick layer of beautifully woven rugs, gifts of generous benefactors. Missing are statues, ritual objects, musical instruments, and stained-glass windows of the Christian story.  However, carved domes, arched windows, flowered tiles, wooden carvings of inscriptions from the Qur’an (Koran) or names of Muhammad and his companions are allowed and can be quite stunning.  Large crystal chandeliers often shed subdued light on the sacred space.

The semicircular niche or mihrab points in the direction of Mecca to assist in knowing in which direction to pray while the minbar serves the familiar purpose of a pulpit for the Imam to speak at the Friday noon weekly service.  Passing by a mosque on a Friday in Alexandria, Egypt, my group listened to a broadcast by the Imam talking a large group of Muslims seated outside.  Our guide translated it as advice about the required once in a lifetime pilgrimage to Mecca.  The Imam advised one should only go after he has provided for his family and should not go into debt to make that journey. 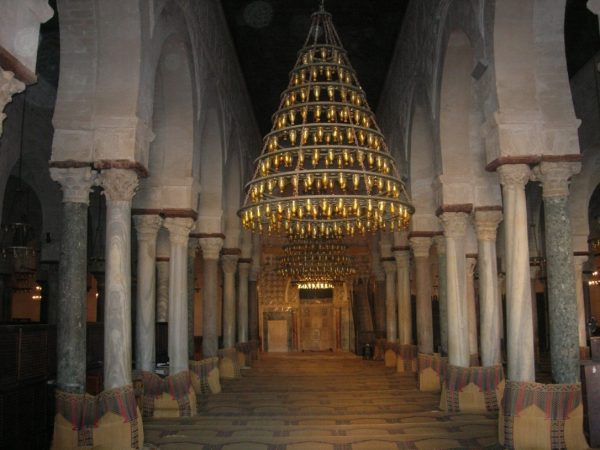 Inside the Great Mosque in Kairouan, Tunisia 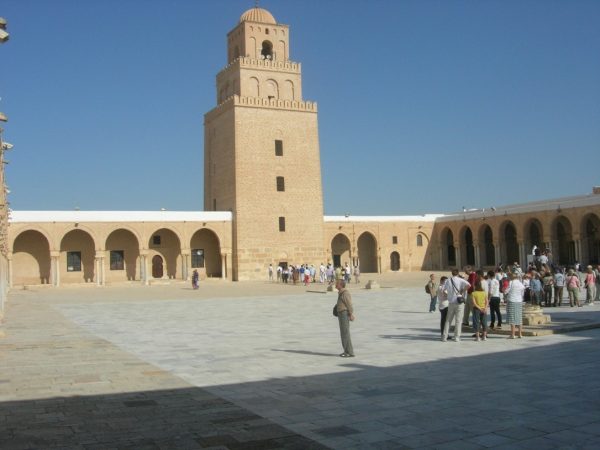 The oldest mosque I have visited is also the oldest place of worship in North Africa dating from 670 AD – the Great Mosque in Kairouan, Tunisia, relatively unknown in the West but well respected in the Mahgreb. If you cannot afford to travel to Mecca for the required haj, a visit to this mosque seven times can meet the requirement.  Even though we were well covered, all of us, including the men,  had to wrap ourselves in a cotton robe handed out at the entrance to the courtyard. Shoes must be removed to enter a mosque, and many were scattered at the entrance to the prayer hall.  At this one, we weren’t allowed inside but could view the open prayer hall with its 500 columns and imagine thousands of the faithful standing shoulder to shoulder. 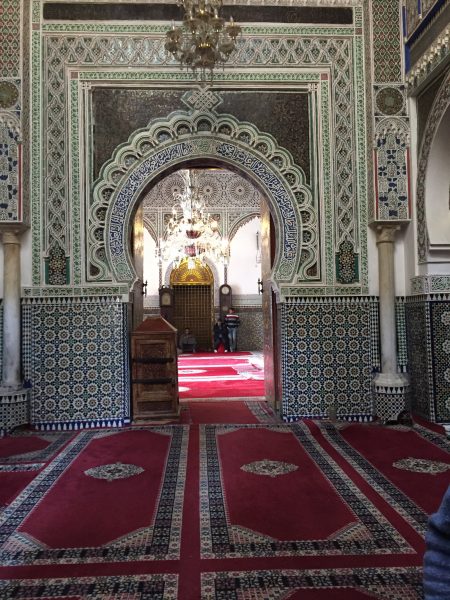 Mosque inside the Fes Medina, Tunisia

From my various trips to Muslim countries, I have become used to the calls to prayer sung out through loudspeakers from the beautiful minarets attached to mosques.  I admit to finding the monotone grating at first but have come to simply associate it with my many positive experiences in Islamic countries.  Only the 5 a.m. rendition can be jarring, especially if the broadcast system is near my hotel window.

Recordings are now often used rather than a chanter’s voice.  The call is a reminder that God is the greatest, Muhammad is his prophet, and to come to prayer and salvation. Truthfully, I have not seen a large response to the call in the Muslim countries I have visited such as Tunisia, Morocco, Egypt, Turkey or Jordan although more than one driver has pulled to the side of the road for a moment of prayer.  But it serves the purpose of church bells only more widely spread and even for non-Muslims, it is a reminder of God’s omnipresence.

Most mosques are government owned.  In Turkey in 2012, we saw many newly constructed mosques.  They were small but numerous.  Turkey’s government wanted to move the country’s traditional secular approach toward a more Islamic way of life.  To that end, they constructed hundreds of new mosques so that the call to prayer was readily heard by all Turks. 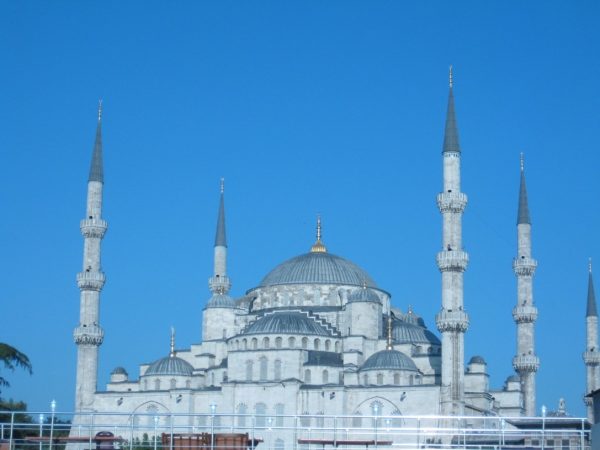 The Blue Mosque in Istanbul, Turkey

Since that time, Turkey has become a leader in providing funds to construct mosques internationally, both for those in the Turkish Diaspora in Germany but also for the Muslim community in Ghana, Kyrgyzstan, Bucharest, and even Maryland, all in the traditional Ottoman building style.  They’ve also opened a Grand Mosque in Istanbul, large enough to compete with the iconic Hagia Sophia and Blue Mosques.  President Erdogan attends many of the openings of these new structures, claiming they present a more moderate way of Islam in comparison with the Wahhabi ideology of their mosque building competitor, Saudi Arabia.  The architecture of a mosque often can predict the form of Islam being taught.

I had heard only Muslims can enter a mosque but have learned that not to be universally true. The leaders of the mosques do ask for modest dress, shoes removed and for those in prayer to be respected – all simple requirements to experience a new world of faith.

One Response to “Visiting Mosques – A New World of Faith”