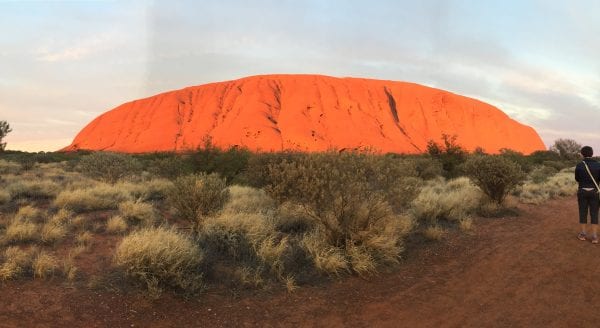 The approach to Uluru rock in the outback of Australia is long, anticipation building as the view of the massive structure grows over the desert horizon. From a distance, it appears as an ordinary isolated plateau but up close, visitors are dwarfed against its looming fortress walls.  Millions of years ago the formation was pushed up by geological forces and laid on its side, causing the unique display of layers from below. It would take some time to explore this natural wonder.

Many of us grew up identifying the large rock structure as Ayers Rock – named for Chief Secretary of South Australia, Sir Henry Ayers.    As with most sites in Australia, it was given an English name without any deference to the long-held Aborigine term. For the aborigines, though, this holy space belonged to them and ownership was returned to the Anangu people in 1985 and the name reversed in 2002.

We first arrived at Uluru in the late afternoon as the sun spread its muted orange and yellow rays over the desert landscape. On a small rise to the west of Uluru, our guide brought out a table to fill with nibbles and wine.  After fighting the very persistent flies, I quit trying to eat and concentrated on the scene in front of me.  From our distance, Uluru appeared like a moonscape – worn smooth outer layer of rock with crater like carvings.  It beckoned to come closer. 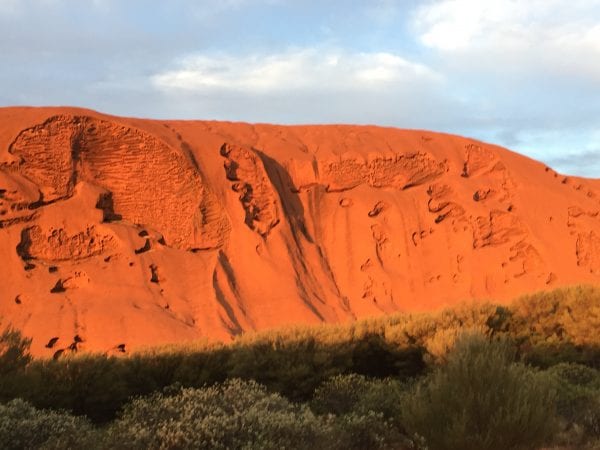 Early the next morning the sacred rock revealed its personality and history as we walked part of its six-mile circumference. By rising before dawn, we experienced what centuries of natives have enjoyed – a sunrise bathing the tinted cliffs in reds and gold.  Our guide encouraged us to mind the signs noting which parts of the rock could be photographed and which were to be treated reverently. The Mala Cave is used by initiation for ceremonies and is fenced off.  Other Caves are considered resting places for ancient spirits.  An obvious erosion appears as a vulva, used by aboriginal women to instruct girls on childbirth. A cool breeze and bird  songs accompanied us on our walk along the sandy trail of discovery. 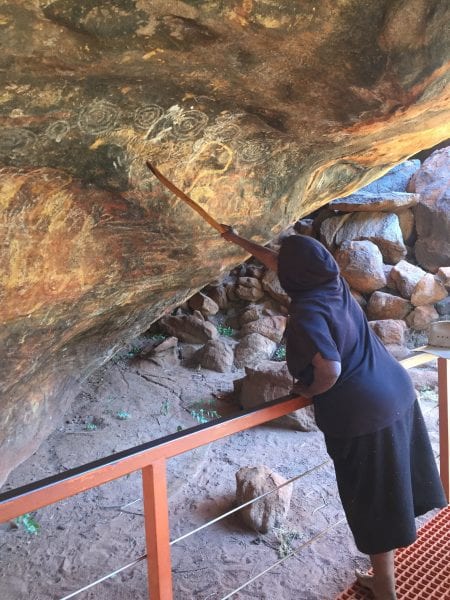 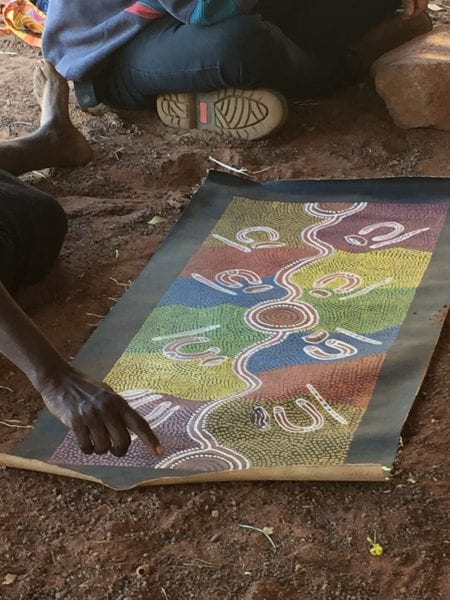 Inside one of the many canyons, we met Mini, an aboriginal guide – barefoot, disheveled white and gray hair, dressed in a worn black shirt and blouse.  She first pointed out berries and leaves that could be eaten at a location used to teach young girls what was safe to cook.  She then sat on the dirt and drew the basic aboriginal symbols, including circles for places, digging sticks for women gathering, and boomerangs for men hunting. We moved inside a cave where she pointed out drawings with ages as recent as 100 years ago, but some could have been 5,000 years old. It was strange having a translator for Mini’s talk as she did not communicate in English.  These symbols were repeated in the paintings offered by indigenous artists at the visitor center. 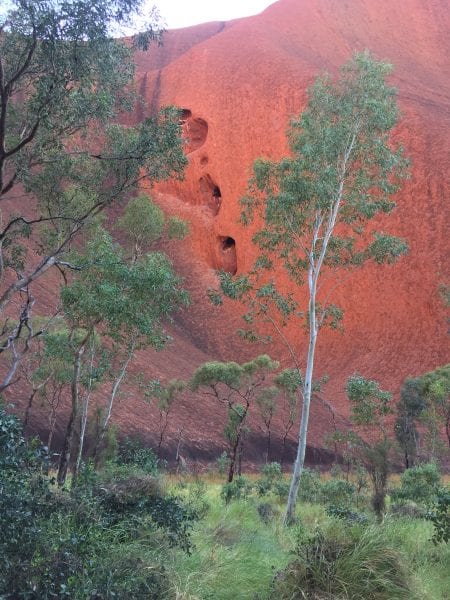 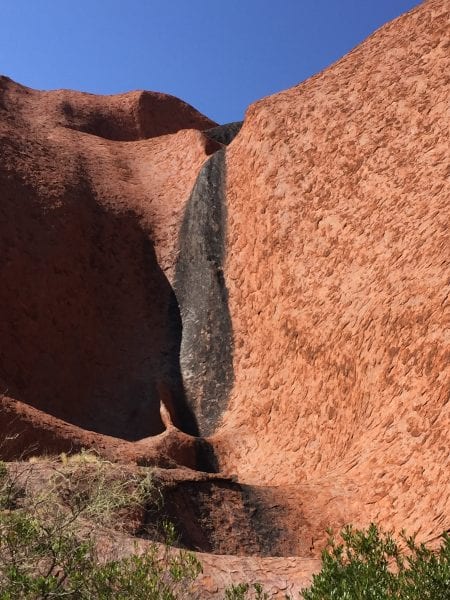 We walked past the starting point to climb Uluru with only a chain to grip marking   the path upwards.  In the past, hiking to the 2,831 foot summit was expected of visitors and many took rocks home as souvenirs.   It was considered a seeker’s accomplishment.  But that changed when the Anangu people regained power over the rock.  When I was there in March, 2019, a climb was allowed but discouraged.  The sign said simply , “Please don’t climb.  This is our home.”   Since October, 2019, even the option to ascend was stopped and today, visitors can only admire from below.

As further evidence of growing sensitivity to native beliefs, a phenomenon known as “sorry rocks” has gripped guilty tourists who took home rocks they gathered during their visit to Uluru.  Some felt it brought them bad luck and others just wanted to return them where they belonged as a sign of respect.  Rangers at the National Park must now decide whether the returned rocks are authentic Uluru rocks and then where to place them.

Recent DNA results have confirmed that the Aborigine people of Australia are the world’s oldest civilization, having been separated by rising water from the rest of the world over 10,000 years ago.  Their distinctive broad faces and dark sundrenched skin tell a long history of living off nature in a desert world that appears to give little.  But they knew hidden in the small canyons of Uluru rock were water, food and shelter, a discovery that today’s visitors can also observe and admire. It was a connection to the past, made present by Mini and other Anangu artists who continue to pass down the stories and secrets of Uluru rock.

3 Responses to “Uluru Rock – One for the Ages”