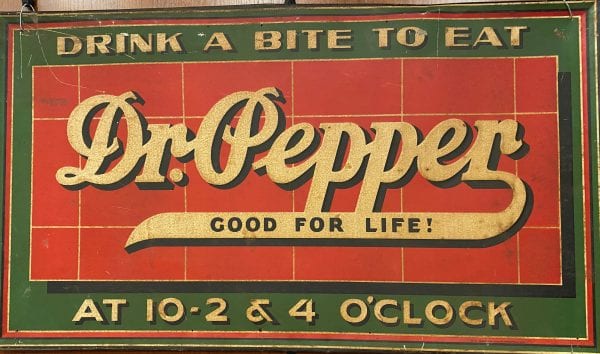 Did you know that Dr. Pepper is a year older than Coca Cola – 1885 vs 1886?  Did you know there a career as a “flavorist” who is trained in chemistry to construct flavors?  Were you aware that “drink a bite to eat” was the slogan in the 1920s to promote Dr. Pepper as an energizing snack to be “eaten” at 10, 2 and 4 to avoid fatigue?  There’s much more to learn at the Dr. Pepper Museum and Free Enterprise Institute.

I had long wanted to stop in Waco for a visit to the Dr. Pepper Museum.  You would think after hundreds of trips to Austin, that would have happened before now – especially since Dr. Pepper was my favorite drink growing up.  I preferred it to Coca-Cola and liked to brag that it was a Texas drink.  I drank it in earnest in high school when my friends and I would “circle” the Arrowhead Drive-In in Plainview and order a vanilla Dr. Pepper.  Some preferred cherry Cokes but not me.

When my family traveled around the United States, I would order a Dr. Pepper and received many puzzled looks from waiters.  Most had never heard of it. Although it is now a national drink, I still get irritated when it’s not available on airlines or at ball games.  I don’t drink it often but want it available when I do. 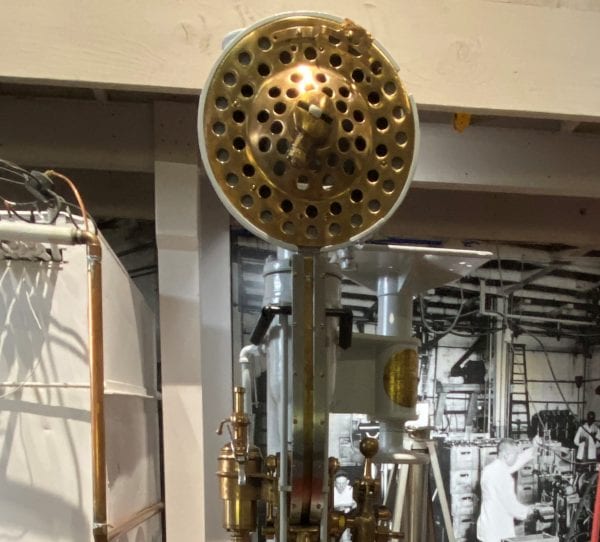 Thanks to Joanna and Chip Gaines of HBO’s “Fixer Upper” fame, downtown Waco is a flourishing destination, and the Dr. Pepper Museum located in its 1906 bottling plant is part of the draw.   In comparison to the Disneyesque “ World of Coca-Cola” museum in Atlanta, Dr.Pepper’s tribute is informative but staid.

I read most of the facts provided like bubbly water has been with us for centuries.  In 216 BCE, Hannibal took a break with his troops at the bubbling waters of Les Bouillens, France, which spring supplies the world with Perrier water today. In the past, these effervescent waters were thought to have healing powers.  It wasn’t until the 1700s that an artificial process was devised to infuse carbon dioxide into water to produce artificial carbonated water.

I loved learning that the first soft drinks were developed in pharmacies where individual pharmacists concocted their own special drinks that produced followers who would come to the pharmacist just for that drink – much like the specially created cocktails offered in many bars today.  Both Dr. Pepper and Coca Cola’s recipes came from pharmacist’s experimentation.  The museum credits Charles Alderton with creating the formula for Dr. pepper in 1885.  However, according to Paris historian, Skipper Steely, the formula was brought to Waco by Robert Lazenby and two other men who served a similar drink at the Tennessee Drug Store on the west side of the square in Paris, Texas.

The history of the Dr. Pepper company follows its move out of Texas into the world at large, and includes cans from Mexico, England, Belgium, and Russia. 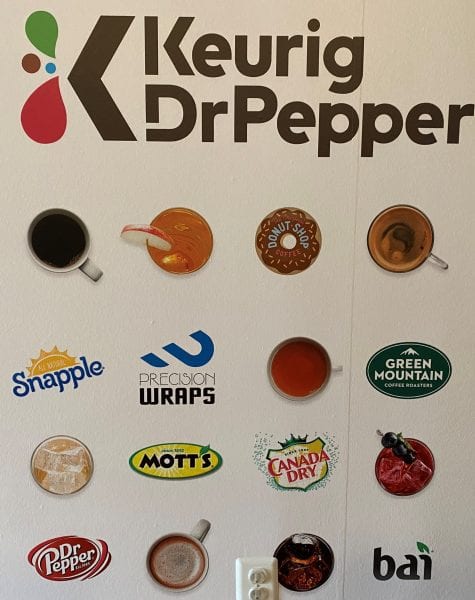 Some of the products owned by Dr Pepper Snapple Group

The main company is still in Dallas but is owned by the Dr. Pepper Snapple Group.   As with Coca-Cola, the company owns more carbonated beverages such as Canada Dry, 7-Up and A&W Root Beer.

Advertising has changed over the years with the first decades emphasizing the energy Dr. Pepper provided and even promotion of it being a “healthy” drink with its “myriad fruit juices.”  The latter was forced to change under truth in advertising rules and the company agreed to stop targeting children under 12.  I’m wondering if the Dr. Pepper poker game will fade out as fewer players understand why 10s, 2s, and 4s are wild.

The unique section of this museum is the Free Enterprise Institute, created “for the purpose of educating Texas School Children and Adults about the economic system that underlies American life.” The emphasis was how failure leads to success, citing Coca Cola’s attempt at a “new Coke” as a classic failure.  Another corporate misstep of a different flavoring was the Celery Champagne drink that was apparently popular for a time but fell out of fashion. I can’t imagine it ever being in fashion with a name like that.  In this Institute, school kids are encouraged to experiment and to be ready to learn from failure – an important lesson in our free enterprise system.

The absolute best part of the museum was the free Dr. Pepper drink made from the original syrup and carbonated water given at the end with paid admission.  it was my first soda fountain Dr. Pepper in years, and I could not say enough good things about the sweet flavoring. My Coca Cola loving husband was not as impressed.

In my adulthood, I’ve had more than my fair share of end-of-tour beer, wine, and champagne samples but none released the nostalgia that this one did. For all Dr. Pepper lovers, Waco needs to be a pilgrimage destination where a museum and fountain drink awaits you.