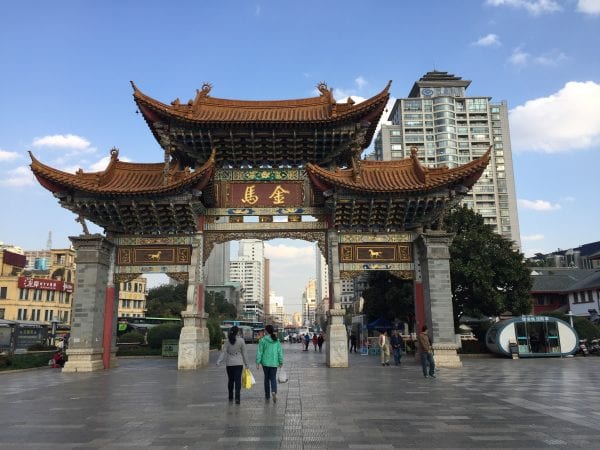 I knew nothing of Kunming, China until discovering it was the terminus for most of the WWII flights over the Himalayas from India bringing supplies to the Allied and Chinese armies.  My father flew this dangerous route over the “Hump” 150 times.  When I journeyed to follow his WWII footsteps in 2014, a stop in Kunming was required.  Expecting a 2000-year-old ancient trade city visited by Marco Polo, I found instead a modern metroplex with temperate weather and a reputation as the Garden City of China. 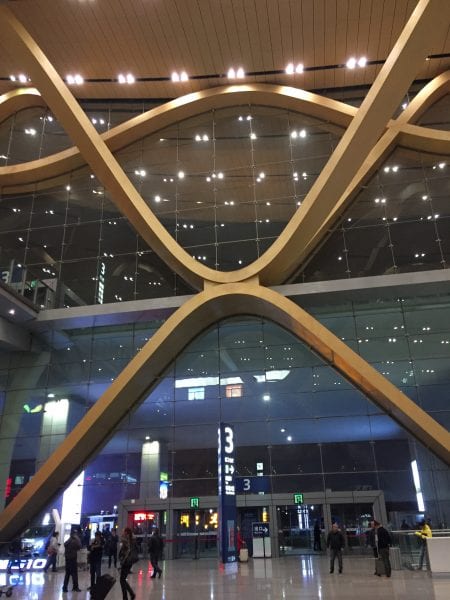 The striking Kunming Airport, designed by the American architectural company, SOM, and completed in 2012, was China’s first green airport and an early indication of an updated urban environment, especially after flying from Kolkata, India. It is China’s fourth largest airport and has a surprising number of international flights including a direct to Paris, France. Customs was efficient with stern officers barely glancing at my newly purchased ten-year visa.

Flags along the sparsely populated new highway into town promoted Kunming’s beauty.  According to our guide, freeways and airports are built more rapidly in China compared to the long process required in the United States.  Land is leased in China, not individually owned, and they have efficient ways to clear the path for new developments.

Located in southwestern China, Kunming was a late bloomer.  The early explosion of industry and population movement on the Eastern side of the country caused nauseating air quality problems and crowded conditions.   By the time Beijing approved its “Go West” development program, an enormous domestic economic policy to boost development in western China, they had learned more about clean air.  Kunming’s existing industry was moved out of the inner city and solar energy emphasized.  All motorcycles are battery run, meaning motorcycles approach without warning. We had several close calls with passing cyclists. 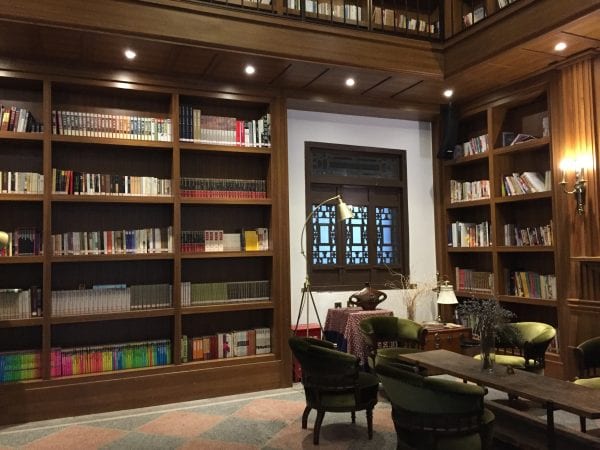 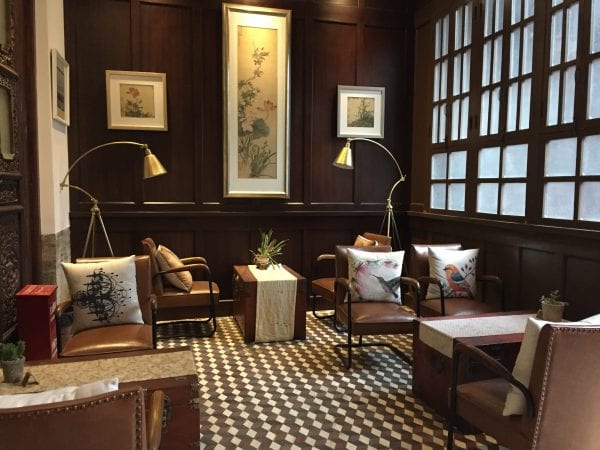 Sadly, since 1952 most of the original walled historical area has been torn down to make room for high rise apartments.  We struggled to find any charming lodging other than international hotel chains, including the Holiday Inn. We discovered the Silver Chest Boutique Hotel created from the home of a wealthy entrepreneur who had built it over a century ago near the Bird and Flower Market.  Owner Tang Lei had to meet strict requirements of the Kunming Bureau of Cultural Relics to create an authentic ambiance of a past era.   From the original wooden front doors to 1930’s tiled floors in the rooms to a cozy library with rare books loaned by the Yunnan Province Library, we could imagine a wealthy family’s living arrangements. Our continuous complaint centered around the lack of heating in all the buildings in Kunming, including the hotel, with only our small room excepted.

In addition to being a large agricultural area that includes thousands of fruit trees, Kunming is the largest flower exporter in Asia.  The City began hosting the Kunming International Flower Expo in 1995 which launched its reputation for natural beauty.  Last year’s expo featured 10,000 new, high-quality flower species and products. 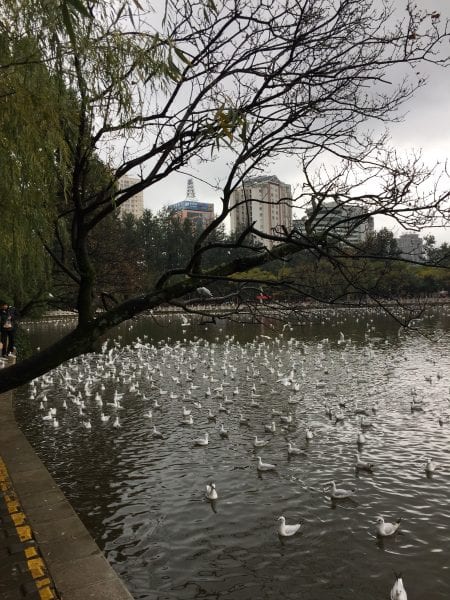 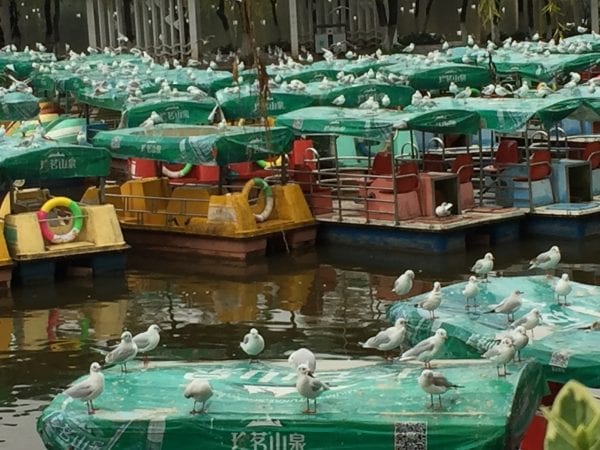 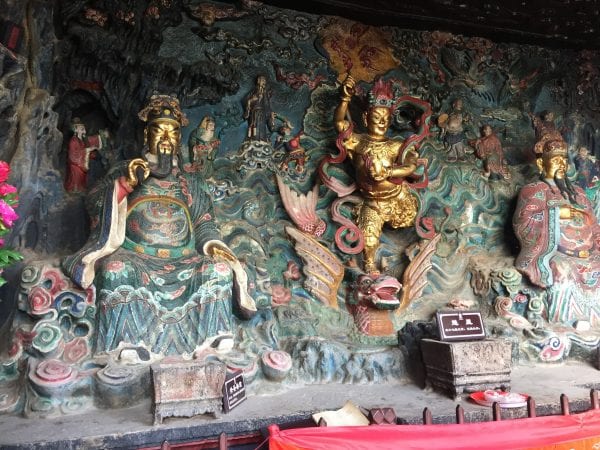 Two large lakes anchor the center of town while the Western Hills lie to the west. We explored the park around Green Lake.  Young environmentalists were protesting water quality (we think) but put down their signs for a photo with us.  A visit to the Western Hills required a bus ride, a ski lift part way up the mountain and a climb to ancient temples carved into the mountain side.  Students pray at the temples for good grades, wives for success in a pregnancy and all touch the elaborate Dragon Gate for luck, us included. 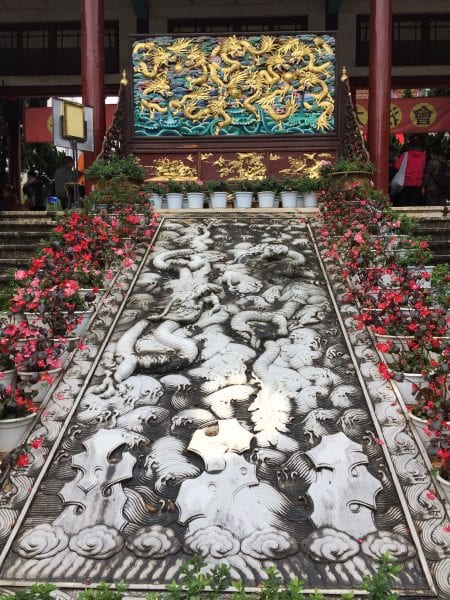 On a tour of the city, we visited The Yunnan University founded in 1922 and highly regarded in China.  Just down the street was Yuantong, a major Buddhist Temple, where we joined supplicants buying candles and offerings to burn.  Two of the original gates to the city have been beautifully restored for viewing, the Horse and the Rooster.

Kunming has many more Chinese visitors than international ones.  We met no other Americans and only one Dutch woman waiting at McDonald’s for a taxi.  English was almost non-existent.  Our hotel receptionist had to show her phone’s translation of what she wanted to say.  Elena, our guide, ordered the most wonderful dishes at lunch time but in the evenings, we were without her help to decipher restaurant offerings. By pointing at pictures of dishes on the menu or even ordering food being served to the next table, we managed but were never quite sure what we were getting.  My brother tried pizza and was served plastic gloves to eat with.

Kunming offers a picture of present-day Chinese development in a pleasant setting with a small overlay of the past. It is also the gateway into the tribal areas of China that hosts 24 tribes, a location I want to visit before the Chinese Modernization Machine catches up with it.  I should go soon.