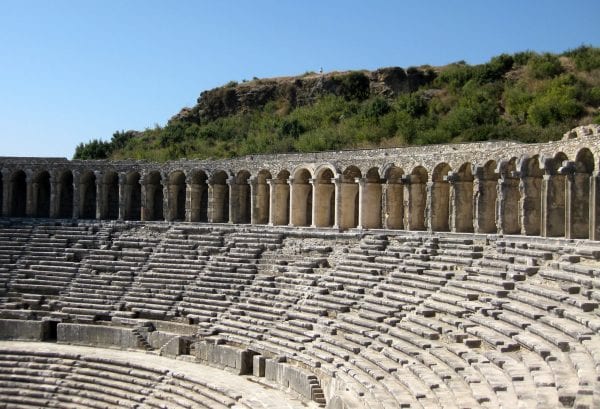 Most visitors to Italy believe they are viewing the best Roman ruins and certainly the Coliseum, Circus Maximus and the array of partial structures in the Roman Forum are a few examples that display the construction abilities of the Roman engineers over several centuries. I first saw them in 1969 after studying Roman architecture in a high school humanities course and experienced the thrill of imagining the swirl of activity around the market 2000 years ago.  I even made my family go to the Appian Way, possibly the world’s oldest intact highway that connected Rome to some of its important ports and cities.  The “Pines of Rome” by the Italian composer, Ottorino Respighi was played by my high school band and as we walked the old stones, I could feel the drums pounding like Roman armies returning from war. My family was unimpressed with my humming the theme.

Today, Italy must impose limitations on exploring their valuable collection of ruins because of the wear and tear of millions of visitors each year.  For this reason, one should consider visiting ruins in the countries circling the Mediterranean Sea that give a vivid picture of the power and reach of the Roman empire, most available with minimal costs and no crowds.

Amphitheaters were popular with both the Greeks and Romans.  Everyone loved a good play. Romans constructed theirs from the ground up and enclosed the circle.  The Greeks kept open the view behind the stage.  We visited Aspendos, just outside Antalya, Turkey.  With nary a visitor in sight, we paid to enter a completely restored Roman amphitheater. No security guards prevented our exploration of the stage and wings nor our climbing to the top row for the best view.  Down the road was the Roman town of Perge, whose streets were open for viewing.  We shared the experience with a family of four and few others.

On stage at one of the best-preserved Roman theaters of ancient Samaria, several archeological layers down in Bet She’an, Israel, I practiced the steps to my “Dancing With The Stars” routine I would soon perform back in Paris but my audience was only my two traveling companions. A surprising find at Petra, Jordan was the Roman excavations that lay past the well-known narrow paths through wavy carved sandstone walls.  Our walk into the ruins was over a two-thousand-year cobblestone road built by the Romans, one of over 50,000 miles of highways they constructed in their empire.  This one was easy to maneuver in the day but challenging on a moonlit night as we left an evening light show. 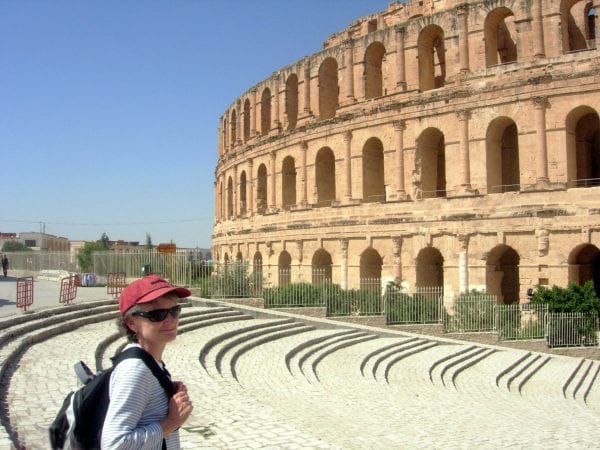 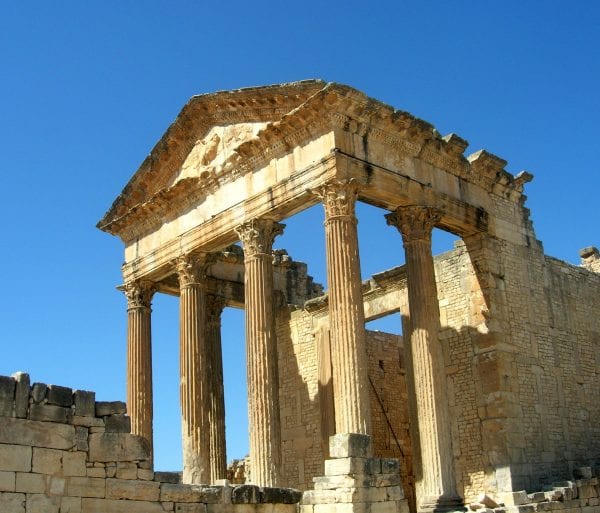 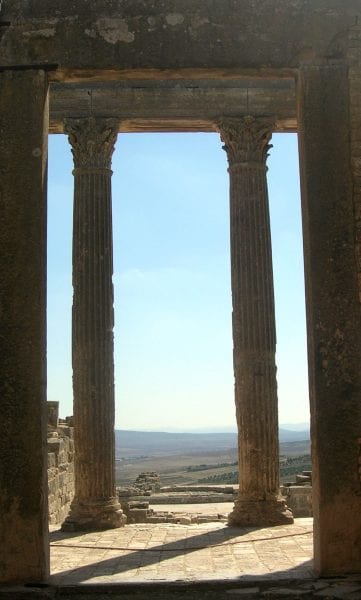 For such a small country, Tunisia was filled with well-preserved ruins.  Rome loved breadbasket Tunisia, as much of the wheat grown for the Empire’s use came from this area.  Grain was used to keep the masses fed and happy.  My cousin drove us to Dougga, considered the best preserved small Roman town in North Africa and only an hour’s drive from the capital, Tunis.

Rome had its own requirements for construction of towns – just as we do today.  Before bringing their franchise to an area they had conquered, they preferred a hill to keep watch for approaching enemies, a water source to fill their jugs and public baths even if it required an aqueduct, stones for roads and construction to be used with their volcanic ash concrete, and surrounding fields for food production.  Dougga met all these requirements. The 360 degree view from the Temple of Juno Caelestis captured the Valley of Oued Khallad with open fields below.   This ruins even had a brothel near the public baths that offered hot, cold or warm settings.

My favorite out-of-Rome ruin was the rare Coliseum found in El Jem, Tunisia.  It is smaller than Rome’s but built in a similar way out of free-standing blocks without a foundation and is well-restored and almost empty.  To visit different areas of Rome’s coliseum requires increasingly costly tickets.  Tunisia’s is open for viewing for a modest entry price and you are free to explore on your own, including the underground rooms and pathways that led prisoners, gladiators, and wild animals into the arena. 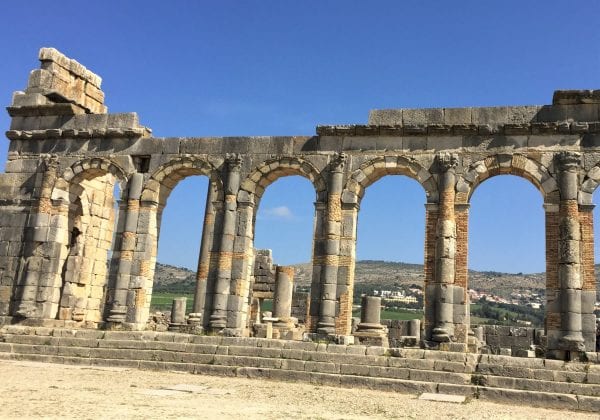 Mosaics in home in Volubilis, Morocco 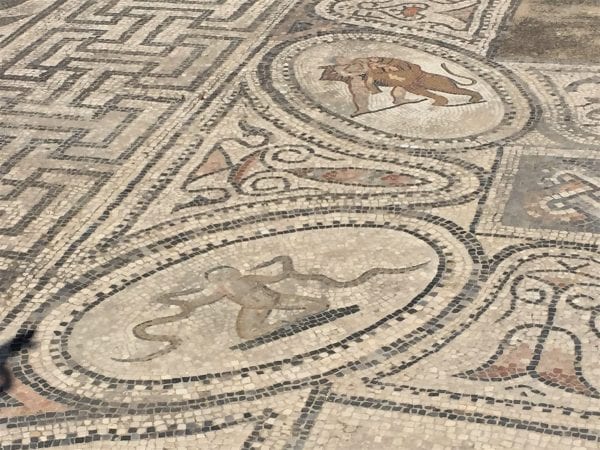 Mosaics in homes in Volubilis, Morocco

In Morocco, Volubilis was well worth the visit as it was the most western North African Roman city. A surprisingly complete Basilica and Triumphant Arch highlighted the ruins.  Beautiful mosaics filled the floors of homes while storks perched atop some of the many columns.  Our guide lived nearby, and three generations of his family had been involved in the excavation and restoration of the town and now provided guide services. Volubilis was so well built that it continued to be inhabited until the 11th century.

Rome fell eventually due in part to overextension of resources, corruption in the government, and invasion of Huns and other Barbarians.  The government collapsed but the contribution of Roman building ingenuity lives on and continues to be a source of wonder and imagination far outside Italy.