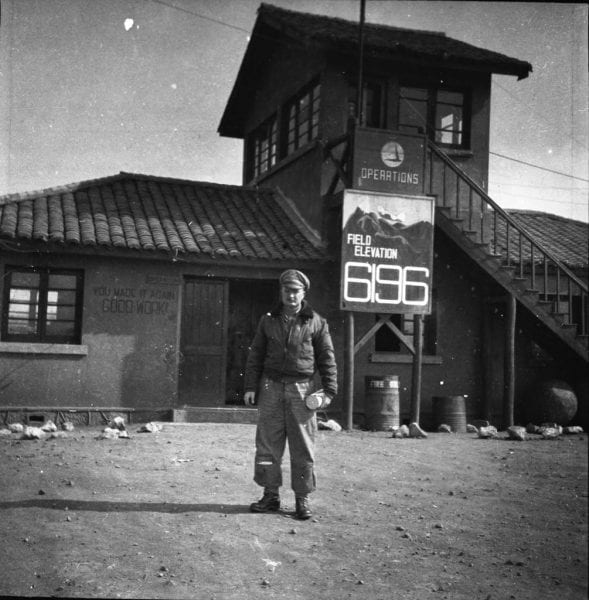 My father at the Kunming Control Tower, destination of most Hump flights

Thanks to its temperate climate and mile high altitude, Kunming is known to Chinese citizens as the city of eternal spring. Now numbering 7 million residents, it is a governmental and manufacturing center for the region. But in WWII, it was bustling with American and Allied pilots, the destination of most flights flying “The Hump”, the moniker given to the treacherous  transport operation over the Himalayas from India to western China bringing fuel for the American and Chinese armies fighting the Japanese.  On November 15, 1945, the WWII Hump operation closed, three months after the official ending of the war.  Additional time was required to move troops and equipment back from China and India and planes continued to fly that treacherous route.

More Americans are familiar with the Flying Tigers led by Texas born General Chennault who commanded an early small group of fighter pilots to attack Japanese Zero fighters harassing Kunming, China.  The Hump operation is not as widely known but is respected by WWII buffs.  In contrast, Chinese citizens and their government remember our help well and have found ways to commemorate it, especially in Kunming.

The Hump was considered one of the most dangerous flying routes in the world and American pilots flew in what would be considered primitive planes today, C46s, C47s and C54s.  They wore uncomfortable oxygen masks, guided by basic instruments with little knowledge of the weather’s forecast.  Cold Siberian winds collided with warm, wet fronts from the Bay of Bengal, causing dangerous wind currents and icing.  Overloaded planes crashed.  Fuel barrels exploded in midair.  Inexperienced pilots lost their way. Over 600 planes and 1300 crew members were lost. My farmer father flew that route 150 times in 1945.

On a visit to Kunming to follow my father’s WWII footsteps as a Hump pilot, I was touched by the ways the citizens honor this operation, beginning with a driver named Happy Jack who couldn’t get over having a Hump Pilot’s child in his van.  “Your country helped us,” he repeated often.  He took us to a restaurant called The Hump.  Attached to the outside wall was an airplane propeller with globe lights above outlining the Hump flight pattern over silhouetted mountains and a sign that read, “The Hump since 2000.”  Inside, manager Mr. Wong welcomed us and gave a history of the restaurant and the pilot veterans he had welcomed since 2000.  His father remembered running from the Japanese when their airplanes approached and was one of many who were saved by the appearance of the Flying Tigers and who remained hopeful because of The Hump operation.  War memorabilia and photos decorated the interior as the young clientele drank coffee and visited.  Mr. Wong paid tribute to my visit, saying, “Your father helped our country.”

At the Kunming City Museum, the American Volunteer Group Memorial Hall is next to the Dinosaur Fossil Exhibition.  Expecting a display or two, I was stunned by the rooms filled with war memorabilia, photos and details of the Allied presence in China during the war.  Kunming is especially respectful towards General Chennault and his Flying Tigers but towards the end of this section were displays honoring those who flew The Hump.  A parachute survival kit included a watch, knife, needle pliers, an AAF stereoscope used for map reading, an AAF Hump Pilot map, a survival book for the jungle and first aid packet, equipment that would help a downed pilot walk the thin line between life and death. 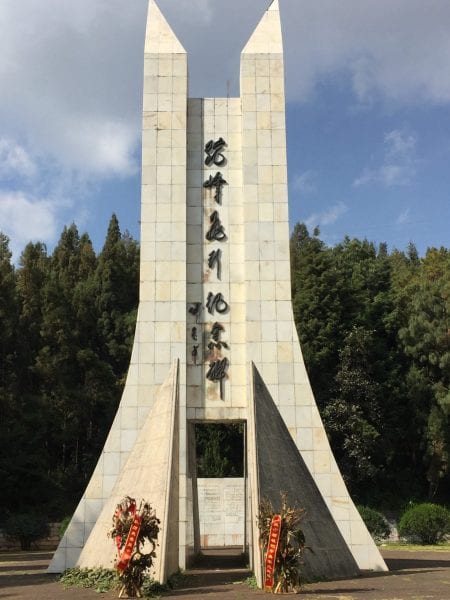 The largest acknowledgment of the importance of The Hump operation is still the Hump Monument opened in 1993 and built to “commemorate this daring feat in the history of aviation and friendship between Sino-American soldiers and civilians fighting shoulder to shoulder in the anti-fascist battle.”  Made of white marble the thoughtful design has three layers of meaning – an outline of a plane merged with two mountain tops with a large H blended in – H for the Hump,  mountains reflecting the Himalayas and the plane for the transport.  A history of the Hump and the part that the Chinese people played in its operation were recorded in a nearby display.  Photos of the rock of the airfields being crushed under large concrete rollers pulled and pushed by individual Chinese was a reminder of the combined efforts in the air and on the ground to make the Hump operation successful.  Happy Jack read every word of the display and continuously thanked me for my father’s service.

Prior to arriving in Kunming, I had visited my father’s base in the Assam valley of India where little note is made of its wartime importance.  The reception in Kunming countered that indifference with much appreciation for his work, a recognition of a time when Americans and Chinese worked together, an appreciation that has survived for 75 years.

3 Responses to “November 15th is 75th anniversary of the ending of the WWII “ Hump” transport operation over the Himalaya Mountains and it is still remembered in Kunming, China”