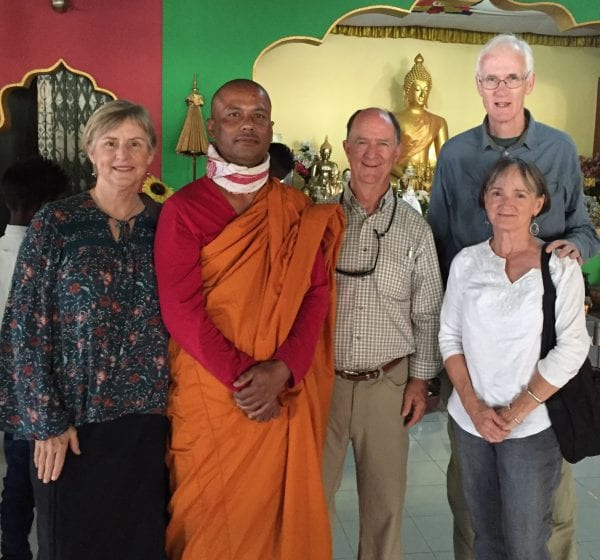 With Buddhist monk at Tai Phakes monastery in Namphake, Assam Valley, India with my brother and sister-in-law, Mack and Jan Walker and my husband, Ed Clark.

Except for tea buyers, few visitors have discovered the remote Assam Valley of India, the country’s appendix in the far northeast corner surrounded by Bangladesh, Bhutan, China, Myanmar.  In this ancient state, layers of religious beliefs gradually revealed themselves as we moved through the state.

The diversity of religions was not unexpected.  With even a cursory knowledge of India’s spiritual past, one knows Hinduism dominates the country of over one billion residents, claiming 80% of the population.  Despite the exit of most of the country’s Muslims in the partition of Pakistan and Bangladesh, many remain in India proper.  Buddhism’s numbers are small.  And Christians claim only 2.3% of the population and yet that number yields a healthy 28 million followers, including a large following of Baptists in Nagaland.  We experienced all of these during our visit to the state of Assam. 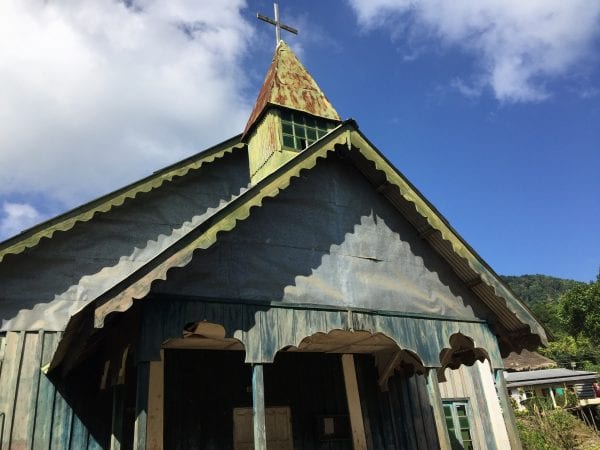 On our first day of driving from the Guwahati airport, we saw banners of the recent Diwali Festival of Lights, a Hindu celebration of the victory of light over darkness and knowledge over ignorance.  New posters promoted the upcoming Raas Festival, another Hindu festival centered in Assam, where stories from Hindu mythology are acted out. Christmas lights decorated the outside of many homes. And a quick glance into a lit garage revealed women practicing their dances to be performed at the event. 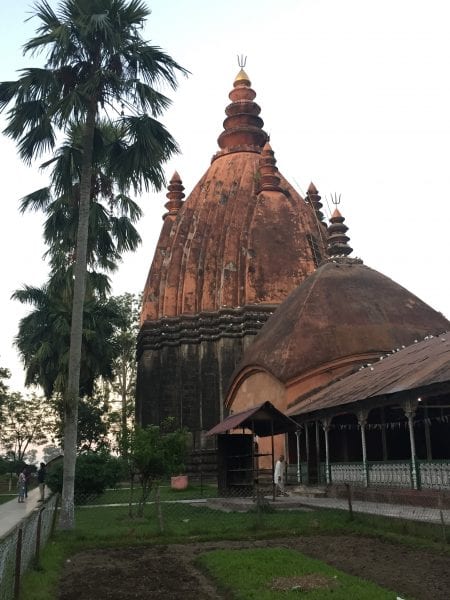 India’s tallest Shiva temple, in honor of a second major Hindu deity, is in the Assam town of Sivasagar

But suddenly, the human landscape changed.  Muslim men in white cotton kufi skull caps and long flowing robes walked to the side of the road.  Women wore head coverings, including some covered by a burka or complete covering.  Fewer saris were spotted as a small neighborhood mosque appeared.  Assam has a larger percentage of Muslims than most of India due in part to immigrants from Bangladesh looking for work in the tea plantations and Rohingya refugees from Myanmar.  Just as quickly, we were back in Hindu territory with a new town and temple built for Vishnu.  We were to pass in and out of Moslem communities all through the visit. 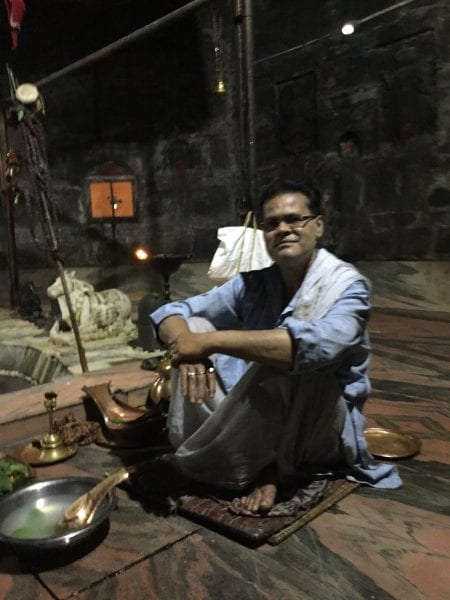 Two-thirds of Assam is Hindu, most followers of Vaishnavism that venerates the god, Vishnu, a fighter of evil.  But India’s tallest Shiva temple, in honor of a second major Hindu deity, is in the Assam town of Sivasagar.  We approached this temple in late afternoon, the outside lit by strung red lights and the inside by candles.  A temple priest wearing dark rimmed glasses, looking more like a businessman than a priest, sat cross legged in the center beside the Shiva Linga or representation of Shiva, awaiting any who longed for a blessing.  Never to pass an opportunity to be blessed, I sat before him as he touched my forehead and recited a prayer in the Assamese language that God will fulfill our desires and protect me and my loved ones.  An earthen bowl, filled with small bills, awaited offerings.  We contributed and walked out into a beautiful sunset over the adjoining lake.

Towards the end of our time in Assam, we visited Namphake, home to the 1850 Tai Phakes monastery and Buddhist community with ties to the Tai people of Thailand fame. For a religion that began in India, it’s surprising that only .7% of the country are followers.

Inside the temple, a collection of Buddha statues from the world’s visitors clustered around a large golden replica of the enlightened Buddha. A young smiling monk clad in the traditional saffron robe, showed us around. Testimonials to the healing powers of Buddhist enlightenment filled a bulletin board. Outside the monastery grounds, an equally friendly couple rallied to our guide’s surprise request for a meal and serve us traditional banana leaf wrapped tamales.  It seemed as serene an environment as India has to offer.

I would think of our peaceful encounters with the varied religions of the region upon later hearing of the large protests against a law passed last December to weed out certain migrants in Assam.  The highly contentious Indian Citizens Amendment Act (CAA), favors citizenship for religious refugee immigrant Hindus, Sikhs, Buddhist, Christians, Parsis, and Jains who arrived in India before December 31, 2014, over mostly Muslim refuges arriving from Myanmar, Pakistan, Bangladesh and even Sri Lanka, a clear discrimination.  It becomes even more complicated in Assam as tea growers want the Bangladesh immigrants to work in the tea fields, some of the Bengalis are Hindus, and established Muslims want to exclude the more recent immigrants to protect their own status.

When I travel, I often feel a complex history simmering around me, unspoken but known by those who live in the country.  As tourists, we can be coddled by guides who reveal only the past and not the precarious present.  Our guides know the layers of meaning but must be encouraged to share them honestly.  Today, I am in touch with one of our guides in Assam who protested the law’s unequal treatment of Muslim immigrants in Assam even though he is Hindu. The protests were violent in certain parts of the country.  And, yet, I can only think of the peaceful Buddhist and Moslem communities that we passed through and lovely temples of Hindu worship we viewed.  India has some nasty history of Hindu and Moslems fighting but in Assam, many of both religions were working together to set aside an unfair law.  I am grateful to have experienced the faiths living serenely side by side. It can be done.