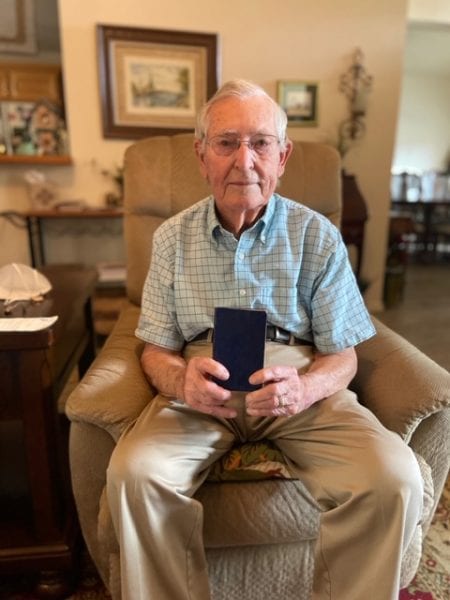 Last month I wrote a story of a travel experience in Nagaland, India when I was following my father’s WWII footsteps from the Assam Valley, India to Kunming, China.  Afterwards, I learned a friend, Elbert Nance, had also been posted in the Assam Valley during the war. He had been astounded to read of our connection as was I and we quickly arranged a time to compare stories.  What I found was a 99-year-old veteran who remembered everything about his war experience.

Elbert Nance is a modest man, wanting at first to deflect questions about himself but we soon were deep into WWII history.  Elbert joined the U.S. Army on July 1st, 1942 after finishing Paris Junior College, and was posted overseas to Cairo, Egypt in January, 1943. He didn’t return home for over two years.

He served as a cryptographer (code translator) during the war, not because of any prior knowledge of the skill but because he could pass a background check before being allowed to learn the codes. Since radio messages could be intercepted, plans, orders and reports had to be transmitted in secret codes.  His primary job was to send and receive coded messages to and from bombers about where and when to bomb as well as results from the bombing.  He used code books to do this although the Sigaba machine became available later in the war, allowing instructions to be typed in.  After being trained in Cairo by the British, his instructor told him, “you have the most important job in the service.” 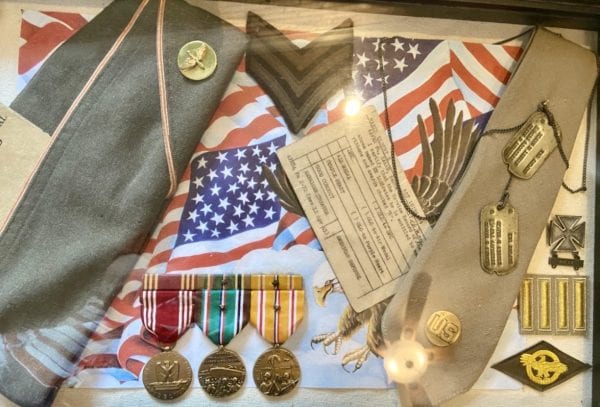 Nance worked with the British, Canadians and Americans serving in Cairo, Egypt, Benghazi, Libya and Sicily and Naples, Italy.  He particularly enjoyed the British with their need for tea breaks.  Some Americans had left his British friends baseball equipment, but they didn’t know how to play.  Nance tried to explain the rules in a condensed fashion.  When they played, he got a “home run” by running the bases as the British players over-threw every base.  In the telling of the story, Elbert was smiling in remembrance of a good time.

While in Italy, he got orders for the Assam Valley.  In consulting his 75-year-old diary, Nance confirmed departing Italy in February, 1944.   His journey to the Assam valley was quite different from my father’s who, as a pilot, was able to fly in short stints over the Middle East and India.  Nance began in a truck to the Mediterranean Sea, then a British boat to Cairo, another British boat to Bombay (now Mumbai), five days on a wooden bench sitting straight up on an Indian train to Calcutta (now Kolkata), three days on the roof top of an overloaded boat up the Brahmaputra River, another truck ride, finally arriving in Jorhat in March, 1944. He would be there for a year encoding messages to and from the pilots of the B-29s, the long-range bombers whose targets were in Japan.

We began comparing stories.  My father flew the Hump over the Himalaya mountains from India into Kunming, China bringing fuel to American and Chinese armies.  Nance was aware of the Hump pilots and their dangerous operation, but they were not based where he was, and he never made that flight. Their two bases were only 120 miles apart.

However, they shared some experiences, including primitive living conditions.  Nance worked eight-hour shifts or more and the operation was open 24 hours a day.  My father had to fly missions every 36 hours and the operation was open 24 hours a day.  Elbert arrived just as the Monsoon season began and my father also served through the Monsoon season a year later.  Nance was issued rubber boots to manage the muddy ground, lived in barracks that had quickly been set up in the middle of a field, showered and shaved in cold water and ate dehydrated eggs and potatoes and Spam – the classic C-rations.   My father would have identified with these experiences, too.  Nance did secure a jeep for his use but was warned, “don’t get close to any cow.”

Nance made his way back to the U.S. in March, 1945, this time passing through Australia to California.  He had been around the world.  Returning to Paris, he continued his education, became a civil engineer, worked for an oil company for 36 years, and returned to Paris to work as a surveyor.  He and his wife, Nancy have been married for 69 years.

Those war years are now 75 years old but in Elbert Nance’s mind, they are as clear as yesterday.  As with other WWII veterans I was able to interview for my book, I felt grateful for the opportunity to hear one more story, one of very few available to be told.