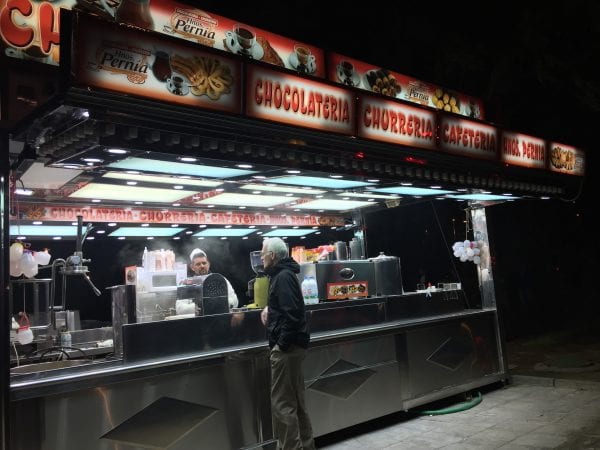 I don’t eat much fried food.  For some reason, it’s always been easy for me to avoid the array of fried sweets at county fairs.  Don’t get me wrong.  I love sweets but it’s the fried part that’s not enticing.  This righteous attitude changed in Seville, Spain when I was introduced to the Chocolate con Churros, a local favorite.

Seville is one of the most beautiful towns in Spain with its narrow streets, white washed buildings and flowers trailing off of balconies. It hosts two major events – Holy Week and La Feria.  Many more tourists come for the Holy Week parades than La Feria which allows the fair to be more of a local event. Without prior planning, we learned on a walking tour of Seville that La Feria was opening that April evening and we should not miss it.  Our guide instructed us to “dress up”, wear our finest, and to get ready to dance.

Following instructions, we pulled out the fanciest clothes we could muster from our carry-on suitcases, meaning slacks and a scarf.  Buses took participants from town center to the fairgrounds.  Our guide had warned us that the festivities didn’t start until midnight but to get there by 10 in order to eat and wander. Of course, 10 pm is late for us to even be up, much less beginning an evening out, but we were getting used to the later nights in Spain.

On the bus, local women were decked out in long flowing skirts and flowers in their hair, an early indication of what was to come.

The Seville fairgrounds are transformed during La Feria.  Hundreds of individual casetas or tented spaces are set up side by side, some sponsored by families, some by businesses.  Inside were the invited, seated at long tables, being served the traditional fair food of a Pescaito dinner of fried prawns, baby squids and clams and rebujito drinks made from Manzanilla Sherry and lemonade, an easy drink to down. Guide books warned that the drink is deceptively strong and to drink cautiously.  We peered in through the openings of the tied back door curtains, wishing it were our families enjoying the meal.   As visitors, we could join in the public booths, serving the same foods and pitchers of rebujitos but without the need for an invitation.

About 11:45 pm, the fifteen streets of the fairgrounds began to fill with those who had finished their meals.  The local orchestra played its last piece and members dispersed.  Overhead, I could see many lights strung across the streets but they remained unlit.  At the stroke of midnight, a great cheer rang out as the switch was pulled and lights everywhere came on, as if the night were dawning.  And the real music and dancing began. 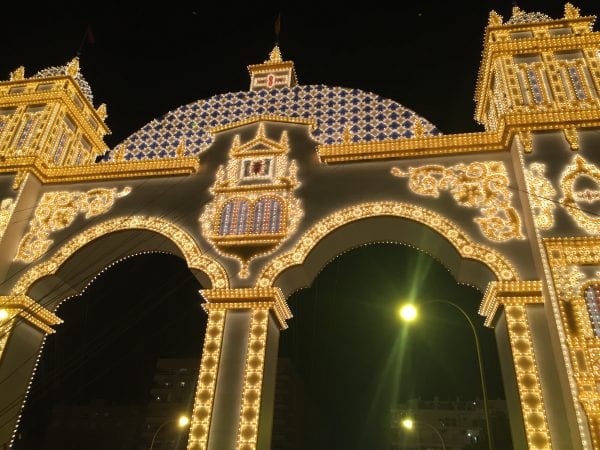 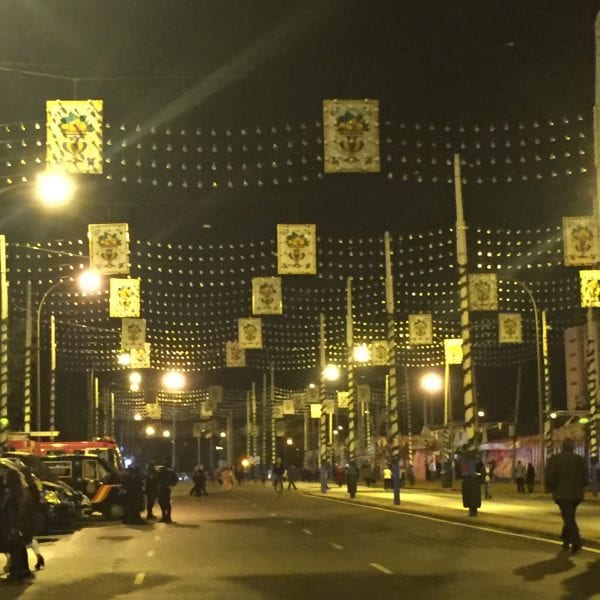 I do love Flamenco dancing.  Its sensuous twirls require delicate hand movements reaching in the air, clapping, fingers snapping following the beat of the singer, guitar and sometime the beat of a seco or dry stick.  Heals click against the floors. It can be performed alone or with a male or female partner.  I have paid to see professional Flamenco dancers and singers but at la Feria, much of the dancing was in the streets, available for all to see or even join in.  We stopped wherever the crowd circled around dancers, clapping and swaying with the singing.  Women dancing with women was more common and the dance easily accommodates this arrangement.  In the larger, corporate casetas, bands played and guests stuck their heels on dance floors.

It was a wondrous evening and most participants seemed prepared to dance through the night.  By 2 a.m. however, it was enough for us and we rode the bus back into the city.  As we left the bus, there it was, on the street corner, a lit oasis, a Chocolateria, a portable food stand that follows the fairs all over Spain selling Chocolate con Churros.  It was industrial size and would be open all night, catching the party crowd as they headed home, hoping they were as hungry as we were.  As a chocoholic, my husband was in heaven.  We all ordered the traditional Chocolate con Churros.  Note it was chocolate with churros, not churros with chocolate.  This meant an emphasis on the chocolate, a thick creamy cup of dark chocolate made for dipping the freshly fried donut like churros.  We didn’t even think about the calories. 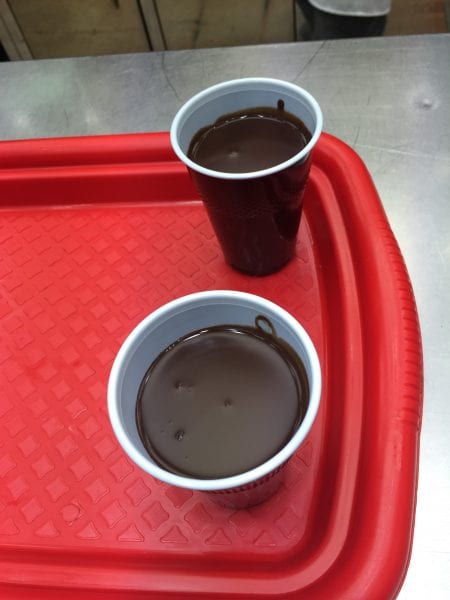 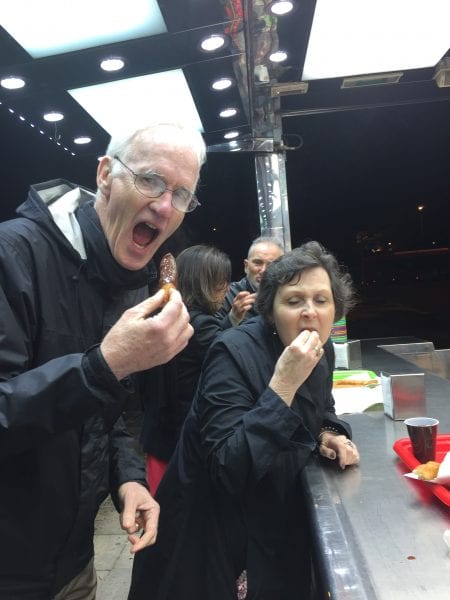 It was after 3 before we got back to our apartment, tired but full.  La Feria would continue every night that week, a testament to the dedication of the Sevillan people to a good time.  We were happy to have experienced such an evening, but it was the chocolate con churros that we would continue to search for during the remainder of our Spain trip even if it meant staying up half the night.  They were that good.