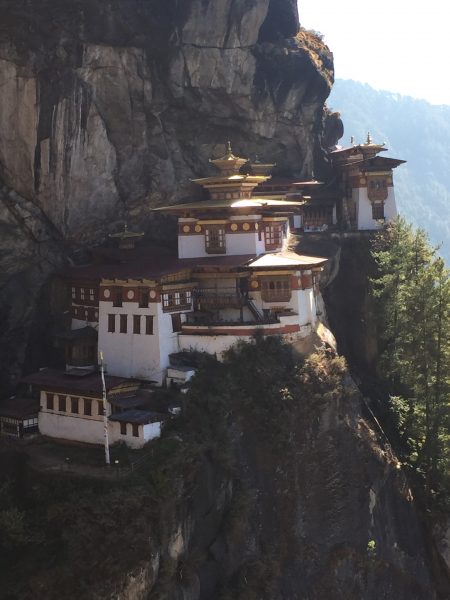 What the Eiffel Tower is to Paris and Big Ben to London, the Tigers Nest Monastery is to Bhutan – the country’s most recognized monument.  It has all the features of an historic wonder.  Location is stunning – over 10,000 feet above sea level in the heart of the Himalaya Mountains.  History is engaging – where Buddhism got its start in the country.  Beautiful building– white washed walls with wooden and gold trim. Add in a pilgrimage site for many devout Buddhists and you have an incredibly varied crowd at the trail’s start, all searching the mountains above to find our destination two miles away with a 1700 foot rise in altitude.

We arrived early at the trail head, hoping to avoid some of the expected crowds.  Amongst the trees were donkeys for hire, walking sticks for sale and patient guides already trying to round up their groups. 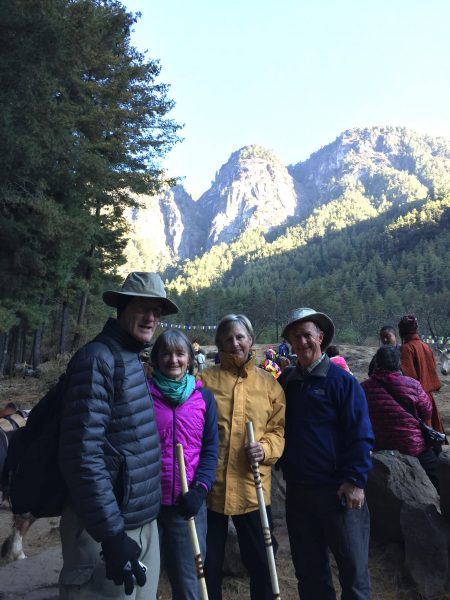 At the beginning of the trail to Tigers Nest

My brother, his wife, my husband and I stayed close to Tisiring, who had accompanied us since our arrival. 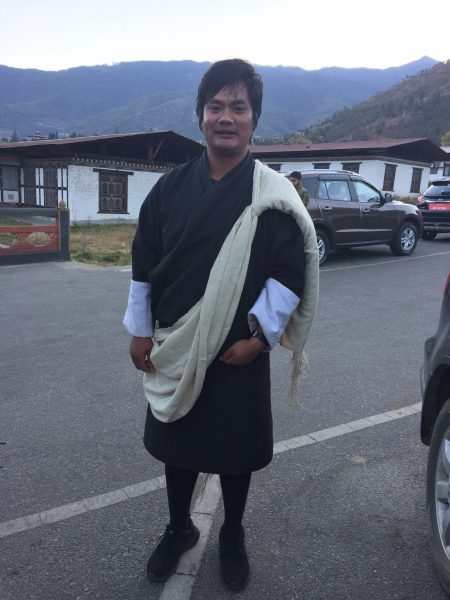 Foreigners cannot enter Bhutan without hiring a guide and driver in advance and having their itinerary approved, complete with hotels – all prepaid.  It is a tightly controlled tiny country that knows it cannot maintain its peaceful ambiance and incredible beauty if tourists were allowed to freely enter.  Our visa to the Royal Kingdom of Bhutan was for only 5 days, the exact number of days we had paid for.

Wisely, our hike to the Tigers Nest Monastery was scheduled for our fourth day, allowing us to adjust to the high altitude. Clear skies promised unparalleled views and warned of the need to dress in layers in order to shed as the day warmed and the hike intensified.  I couldn’t see our destination but knew it was nestled far above.  We began the hike, surrounded by a group of three elderly nuns with shaved heads and others from Taiwan, whose primary purpose for the visit was to worship from that sacred space.  Some did not appear fit enough for the climb but the determination in their faces said otherwise.

In the traditional Bhutanese way, Tisiring walked with his hands clasped behind him, maintaining a gentle pace.  The first half of the trail was steeper, requiring stops at the turnouts.  We moved ahead of the crowd from Taiwan.  Gratefully, the cool mountain air helped with our energy level.  My sister-in-law, concerned from the beginning about the altitude, needed to return to the trailhead with our guide.  Since the trail was well marked, the remaining three persevered.  Halfway up, riders on donkeys turned around at a tea house. 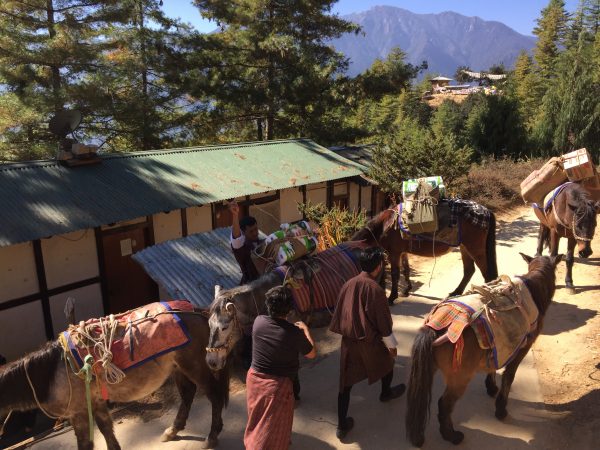 The monastery was now visible but still distant. 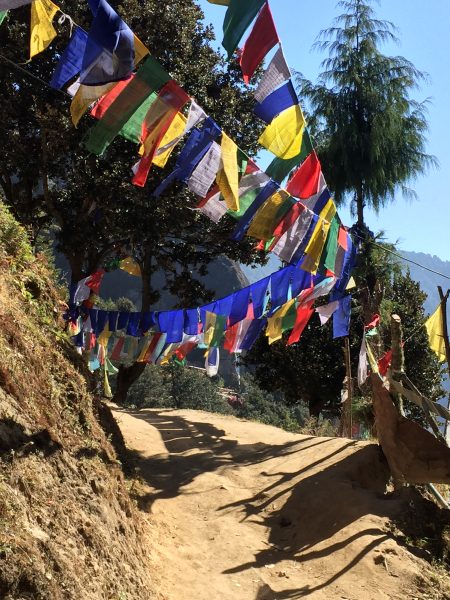 The trail leveled out a bit and filled with freshly strung prayer flags.  We had seen the brightly colored strands all over Bhutan, placed on special occasions to release the prayers contained in the writings as the flags’ edges frayed.   Over a year’s time, the colors would pale until a new strand was mounted. 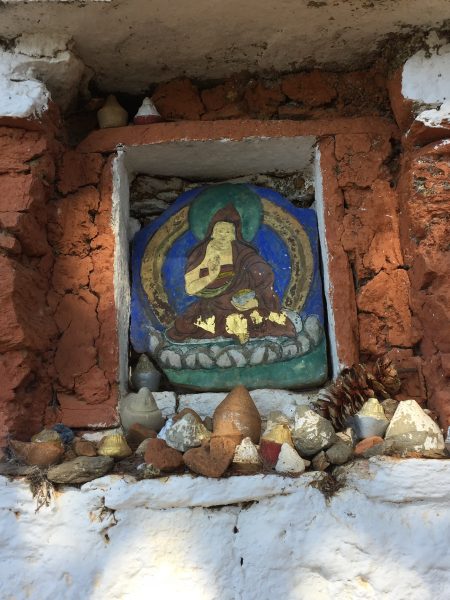 Also along the trail were small painted clay cylindrical cones or “tsa-tsas made for bereaved Buddhist families to remember their loved ones.  They are placed in spiritual locations, often favorite ones of the deceased.  Cairns also marked the path.

The Tiger’s Nest is where Guru Rinpoche, also known as Padmasambhava, was said to appear some 1,300 years ago on the back of a flying tigress. He meditated for three years in caves and then worked to convert the Bhutanese to Buddhism. The monastery commemorating this beginning was built nine centuries later, in the 1600s, although the buildings we saw have been replaced several times because of disasters. Even though it no longer serves as a monastery, it is featured in National Geographic’s book of “Sacred Spaces of a Lifetime.”

We arrived at the lookout overlooking the monastery, where most classic photos are taken including ours. 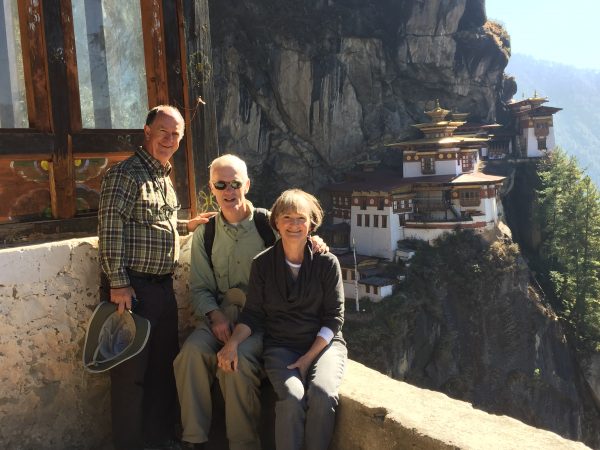 At that point, we were worried about my sister-in-law and decided to turn around without entering the monastery.  I’m sure we missed a spiritual experience, but the trek had already been full of them.  On the way down, we passed the Taiwanese group again with the elderly nuns determinedly pushing upward.  Families with three generations moved forward as a unit, often with a picnic lunch in hand. Young international trekkers easily passed the slower walkers.  Many hikers anxiously asked us how much farther it was.  For those near the top, we were honest – “not much more.”  For those towards the bottom, we just said, “a ways”, thinking some needed a reality check.

On the way down, we stopped at the tea house, enjoying the warm drink under crystal blue skies.  A woman overheard us talking, recognizing our American accents.  She came over to wish us a Happy Thanksgiving, a salutation we all recognized as out of place. But it was Thanksgiving, one that would be remembered, not for the table of food nor the family gathering nor the fall weather.  It was easy to give thanks that day for something different – nature’s handiwork, man’s expression of faith and his desire to experience it.

5 Responses to “Hike to Tigers Nest Monastery is Spiritual Effort”