Being asked to tea in Northern Africa and the Middle East is a common practice, whether the hosts know you or not. When our driver stopped by the side of the road in Jordan for me to get a photo of a nearby shepherd, the herder smiled readily for the camera and asked if he could make us some tea. Since there were no nearby houses, I had to assume he had the makings for the hot drink in his bag draped over his shoulders. Sadly, we were behind schedule and could not join him. I did have time for tea with a seller of jewelry in Jerusalem, my cousin’s neighbor in Tunisia, storekeepers in Egypt, and after a massage in Chefchouen, Morocco. But one of the most memorable tea times was with a Nomadic Berber family on the edge of the Sahara Desert in Morocco.

Berbers are the proud indigenous people of Morocco and date back to 2500 B.C. They’ve lived through the Egyptians, Romans, French and Arabs who brought Islam to the area. Approximately 60% of the population of Morocco, including their long ruling King Mohammed VI, are at least part Berber. Today, the Berbers are divided into three main sects, each with its own dialect. Until the 1980’s the Berber language was not allowed in school but that has changed. Many traditional Berbers live in the valleys and mountains and are farmers or herders. But there remains some who live near or in the desert and who will move with their herds during the changing seasons. A few still go by caravan deep into the Sahara for trade. 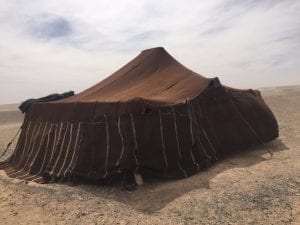 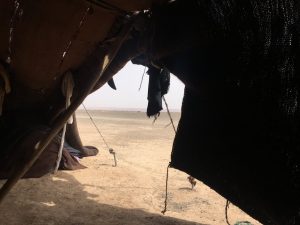 Our driver had encouraged us to take tea with a Berber family. We drove through the strong, sandy desert wind to an area near dunes with scattered traditional tents. Heavy, black woven textiles made by the Berber women from goat’s wool, formed the walls and covers of the tents. A flap could be tied back to allow entrance. One of the tents already had a van in front of it, indicating other tourists were inside. Houssain  parked our van in front of an area with three tents huddled together. We got out and simply waited.

Two children popped out and stared. I made a common traveler’s mistake by immediately pulling my phone out to take some pictures. The children turned away and tried to hide. I could tell by the look of our guide that I had committed a faux pas. He approached them slowly, smiling, chatting, charming them as he pulled out some candy. They happily responded and were then willing to pose with him for a photo. Soon their mother ducked out of a back tent and indicated we should enter the largest tent. She was, obviously, accustomed to visitors dropping in. 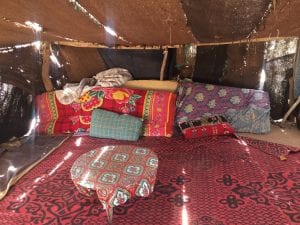 Inside the tent, beautiful hand-woven rugs covered the sand. The bedding from the night before had been rolled up and formed a soft bank for us to sit against at the edge of the tent. A small covered table awaited the tea to be served. Reds dominated the fabric.

The children had become downright friendly and wanted to play with our phones. After a few pictures, we let them look at the photos, but they knew their way around and quickly found games to play. After some time, the mother entered the tent with a tray of Moroccan tea and sweets, both very sugary to give energy to the family and visitors. Although asked to stay, she declined and left us with the food and children. Houssain  explained that the Berber women, by tradition, would never stay in a room where there was a man that was not part of the family. The men of the family were absent as they had taken their sheep and camels to find water and grass. 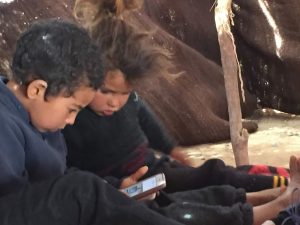 As we drank our tea and sampled the sweets, I listened to the strong wind outside and could see the dust swirling around through the open flap. It would be a familiar sound to the family. Thanks to the sturdy woven walls, the air inside remained clear enough that I had no need for my asthma inhaler.

We asked Houssain how much Moroccan dirham we should leave for the experience. His response was however much we wanted to. We asked what was normal or standard. His response was that it was up to us. I don’t remember what we left but we hoped it would be perceived as generous. The children were sad to give up our phones but smiled and waved as we left. Their mother hurried them inside as they awaited the next car to arrive. The desert people have always been welcoming of strangers but today it is the strangers who help support the family. It was our pleasure to do so. 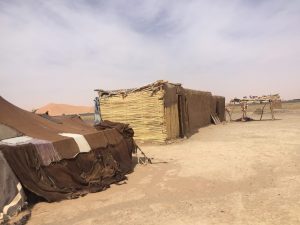 Mary Walker Clark is a retired attorney turned travel writer. Her stories may be found at her blog, Mary Clark, Traveler and her podcasts at KETR, 88.9. She lives in Paris and may be contacted at maryclarktraveler@gmail.com