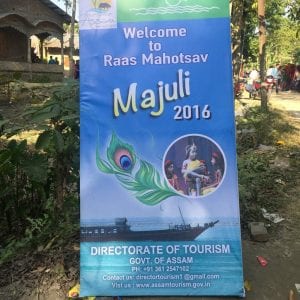 The Raas Festival on Majuli Island, Assam, India
The Brahmaputra River, with its strong masculine name (Son of Brahma) is one of India’s largest and flows from far northeast India south until it passes into Bangladesh, finally emptying into the Bay of Bengal.  It provides navigation for boats, irrigation for fields, and yearly flooding during the Monsoon season.  We pulled up to the southern shore of the river, needing to cross to Majuli Island, largest river island in the world and site for the annual Raas festival each November.  Over the last 100 years, the annual flooding of Majuli’s sandy soil has shrunk the island by two-thirds, losing whole villages.  It is disappearing so quickly there are travel stories advising tourists to visit before it disappears but I discovered few travelers have heeded that advice.

I felt the anxiety of our guide and driver as we approached the river’s edge.  Lines of cars and hundreds of motorcycles waited to board the few available ferries.  For two hours, we inched forward, aware of the fading light, watching helplessly as a line of military cars and officers cut in line.  Just as it was our turn to board, another car tried to cut in front of us.  Our driver jumped out and yelled fiercely at the cheaters, banging on their car.  They finally backed down and we were the last car on.  I tried not to think of stories of sinking overloaded ferries.
The boat was jammed with pilgrims bound for the festival.  On the main floor, two kerosene lanterns dimply lit the crowded space.  Claustrophobia crept in as the night grew darker and I moved to the top of the boat. On the upper deck, my sister-in-law and I realized we were the only women enjoying the night air with a stunning shimmering super moon reflecting the waters of the river. I relaxed for the first time and enjoyed the smooth two-hour ride to the island.
The next day was the first of the festival when the Raas Leela, signifying the unification of the individual soul with the Higher soul of Lord Krishna through unconditional love, is acted out and danced by the entire island’s population, including children. These plays would go through the night.  The many satras on the island, or monasteries, were open for lodging and worship by the pilgrims. 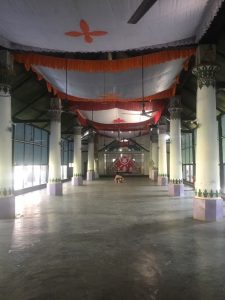 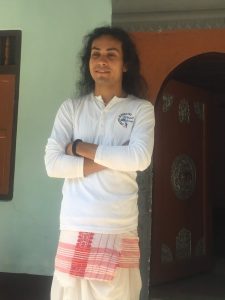 We began at the Kamalabari satra, meeting a young monk who had lived in the monastery since a child, spoke perfect English, and was well traveled.  He was known for his Satriya dance.  In the temple, our guide explained the confusing symbols and reincarnated gods surrounding us and showed how to enter the holy space– hand to the ground, the chest and the head.  Soon, a monk with a bowl and cymbal began a hypnotic chant that only the five of us were present to hear, drawing us into the sacred space. 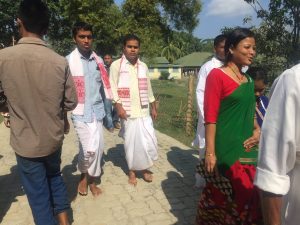 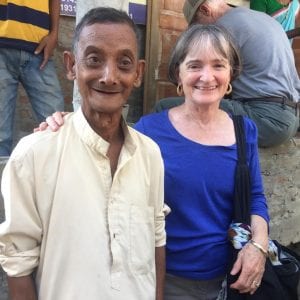 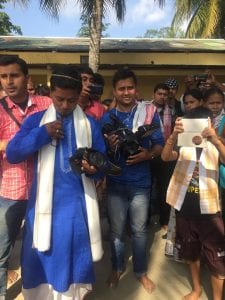 At the largest satra in Auniati, many men and women wearing white with the red and white Assamese stole over their shoulders, approached the temple. Tour buses and cars filled the parking lot.  Butter candles and salt were for sale.  The crowd became denser as we neared the temple.  My husband towered over the crowd.  And then the picture taking began in earnest.  We couldn’t progress without posing for pictures.  A group of women surrounded me from behind, walking with me, laughing, pinching my face, a sign of love.  We seemed to be the only foreigners there.  A news team asked to interview us about our experiences.  The Assamese, three and four deep, surrounded the film crew and took their own pictures of us.  Our guide admitted he had never seen a crowd response like ours.  Our hotel owner even thought that many of the pilgrims had never seen a white person before.  It is strange to think pictures of us are floating around northeast India. 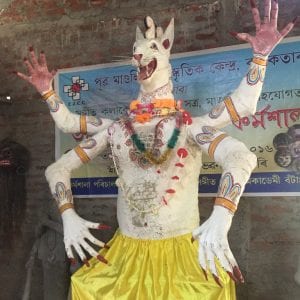 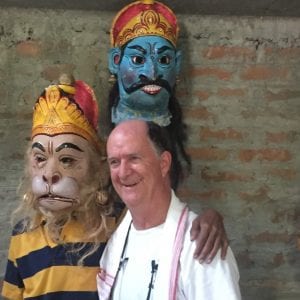 After experiencing the Auniati Temple’s interior, crowded with pilgrims, air heavy with incense, smoke from candles, bells, chanting and praying, we traveled to Chamaguri, home of a well-known mask making village.  The masks were used in the Raas Festival for dancing and storytelling.  My brother posed with a museum employee in a monkey god mask, looking out of place in his white shirt and khaki pants.  Here, the crowds had disappeared, and we could quietly observe the chanting monks in white inside the nearby Samoguri Temple. 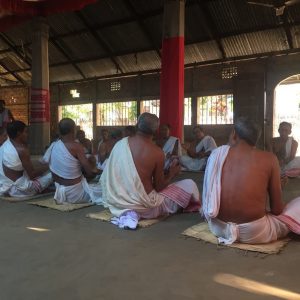 Our return across the Brahmaputra River was not as dramatic.  The next night was spent in Thengal Manor, a 1929 English country mansion with servants.  I felt whiplashed between times – a crazy, rich and intense 24 hours, with a mighty river to unite the cultures.  India is filled with such moments.

Mary Walker Clark is a retired attorney turned travel writer. Her stories may be found at her blog, Mary Clark, Traveler and her podcasts at KETR, 88.9.  She lives in Paris and may be contacted at maryclarktraveler@gmail.com.