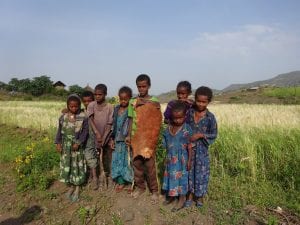 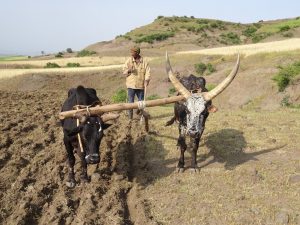 On a beautiful, fall morning, our guide, Muchaw Derebe, picked us up for the thirty minute drive to the Lalibela Airport.  Seven stops were made along the road to take pictures – of farmers using oxen to plow the fields, distinctive circular Orthodox churches, Chinese working on the roads, and children eager to be photographed.  It was a leisurely drive and we arrived with time to spare.

Our next stop was Axum where the acclaimed Ark of the Covenant resides in a chapel, accompanied only by a solitary priest. We were also looking forward to meeting up with some fellow travelers,  seeing obelisks and stelae from ancient Aksum, and attending a local wedding, all followed by a drive through the back mountains of Ethiopia.  The long awaited plans were coming together. 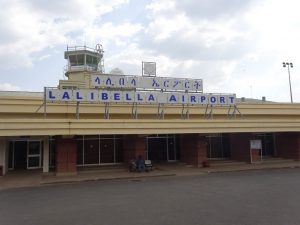 The Lalibela Airport is modest in size but spectacular in location.  A large plateau hosts the runways and in the distance mountains and valleys lie in shadows.   Only one couple waited with us for the flight to Axum.  Departure time of 9:35 am came and went.  A new group of travelers filled the waiting room and left on their plane.  Inquiries yielded limited information.  Our plane had mechanical difficulties and needed a mechanic and part flown to Gondar, where the plane waited.  Two to three hour delay expected.  Anxiety set in.
One small café upstairs offered minimal food and drink with most listed on the menu unavailable, including milk.  Our guide surprised us when he returned upon hearing of our delay and had four large bottle of water in tow.  We settled in for the wait.  I reviewed my pictures with Muchaw in order to correctly identify the various churches in Lalibela.  We took a couple of walks outside the airport, noting recent plantings along the driveway.  Guards waved us in as we returned, recognizing our faces by now.
In the lobby, CNN played on a very small television next to a dead palm tree.  At 3 p.m., the airline served us pasta with a spicy red sauce.  More stranded travelers had filled the lobby throughout the day, an international group from the United Kingdom, the United States, Israel, and Japan.  With English as our common language, we visited across country lines.
At 4 p.m., a rumor circulated that the plane was in the air but at 5:20, the flight was officially canceled due to bad weather at our destination – eight hours after our scheduled take-off.   Our now enlarged group climbed into a waiting van and more visiting took place.  The British couple lived apart – the husband measured public opinion in Baghdad while the wife lived in London.  Two young Israeli girls were traveling for seven months after serving in the military, an accepted practice in many families.  My Japanese chemical engineer seatmate wanted to know how many countries I had been to.  And across the aisle, I talked with the other Japanese, a woman who worked in their embassy.  The return trip to Lalibela passed quickly. Each of us got our own hotel room in a round thatched roof building.  Dinner was also on the airline.  Many of our travelers gathered for a drink before eating and continued the visiting.
Our guide had other plans for us.  Muchaw wanted a happy ending to such a long day.  At 8 p.m., he picked us up and we drove to the Torpido for a true Ethiopian culture experience in a part bar, part dance hall. We entered the incense infused gathering place found down an alley.  Red Christmas lights dimly lit the space while small tables circled an open area.  Honey wine with three levels of alcohol was served.  All smiled at us as we followed Muchaw to a table and sat facing the center.  Soon, a beautiful singer and the accompanist on a one string masenquo entered and began singing, circling the room and incorporating funny comments into the music about the familiar clientele – a kind of Ethiopian rap.  All laughed and clapped.  Muchaw translated for us but sometimes was laughing too hard to do so.  The singer even stopped at our table and sang about our beautiful country and how much she loved America.  Many stood to dance the shoulder shaking Ethiopian style called the eskusta.  We couldn’t stop smiling.
The next morning, we gathered with our new friends for breakfast, drove the now familiar road to the airport and held our breath until our plane took off.  Because of time constraints, we had to rearrange our itinerary. At the Gondar Airport, we hugged the Israeli girls and the American couple and waved at the rest before entering a waiting taxi.

Yes, we missed Axum and the wedding and the drive through the mountains but we passed a unique and unscripted day with new friends and experiences.  It fit my long held belief that the worst travel experiences can result in the best travel stories.  This was one of the best. 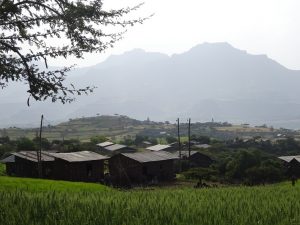