The approach to Simien National Park from Debark, Ethiopia on a newly constructed gravel road is, at first, one filled with jagged mountain tops and plateaus.   But upon encountering the plunge into valleys below, only our Grand Canyon seems comparable. Created by massive erosion, the layers of mountains, plateaus and valleys stretch for miles.  Dizzying drops in altitude lie below edges of the escarpment’s grass fields.  Distant shadows hint at hidden rivers.  The Park contains the highest peak in Ethiopia at 15,000 feet and Africa’s highest hotel.  The scenery would have been enough but we hoped to encounter some of the park’s unique animal life.

We were lucky.  The week before had been cold and misty but this week was clear with almost no one on the roads.  Our arrival corresponded with the end of the rainy season but before dry season when tourists arrive to backpack through mountains and gorges.  Our van simply stopped by the side of the road leaving us to walk across the mountain side, sometimes on a trail but often through grass fields.

The endangered Ethiopian fox and Walia ibex, a wild goat, are rare sightings and stayed hidden from us.  In higher numbers are the Gelada Baboons, nature’s only primates that are primarily grazers.  They are more closely related to monkeys than the aggressive African cousins.  Their numbers have increased from 3000 to 5000 in the park. These baboons spend nights on cliff ledges and emerge in the mornings on to plateau tops to feed and socialize.  That is exactly where we found a herd of them, defined as 60 or more reproductive units. 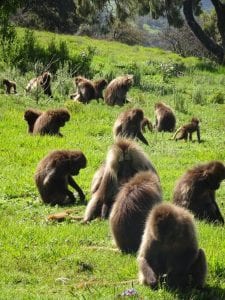 Juvenile baboons rattled branches in a large tree before dropping to earth, chasing and challenging each other.  When tired, they hopped on their mothers’ backs to rest, carried to the next feeding area.  These primates have small sturdy fingers for pulling grass, 90% of their diet.  As they sat and tugged at grass blades and seeds, our small group circled ever closer to observe and photograph.  Warned only not to look directly at their eyes, we were able to come within ten feet of the large pack.  If bothered by our proximity, a baboon would simply slowly move away.  All followed the lead of one dominant male as they crossed the field and disappeared below.

Behind this stunning setting is a more complicated political balancing act.  Created in 1969, the Simien National Park was also designated a World Heritage Site in 1978.  As such, it is followed closely out of concern for rare birds and animals but also for overgrazing by sheep, goats, and other livestock brought into the park.  With 600 households or 3200 people residing in the park and another 1500 around the edges, over harvesting of natural resources and agricultural expansion are also problems.

The need to bring human activities to sustainable levels requires finding alternative livelihoods for the park’s residents.  According to our guide, many are being employed by the park services, teaching them respect for the value of the baboons in tourism.  It has helped eliminate the common harvesting of baboons for clothes and food for dogs.  Two park soldiers were hired to accompany us on our visit for protection from dogs.  After ten days of service, they would return to their home and farms.  Handmade handicrafts were sold at the park’s store, giving badly needed income to local artists. These efforts have been supported by the Austrian government since 1997, a welcome and useful contribution by the international community.

Tourism is rising as more discover this beautiful but fragile part of the world.  There was a tenfold increase in numbers over the last 15 years, bringing more revenue for those who provide pack animals, guides, etc.   A Tourism Master Plan was approved in 2007 to help prepare and direct the movement.   It is being monitored by the World Heritage Organization that still rates the park as EN or endangered because of the high risk of extinction of the Ethiopian Fox and Walia Ibex.
It seemed an African National Park Ranger must be part conservationist, botanist, zoologist,  mechanic and diplomat, not to mention resourceful and creative.  They are charged with protecting rare animals, birds and plant life with limited budgets while convincing locals of the need to cooperate.  Visitors also challenge rules established to protect the environment.  All this was obvious on our visit to the Simien National Park where we found a commitment to preserve the setting with  local involvement.   We can only hope for their success.
Simien National Park