Corporate headquarter tours are not usually high on my list of “Things to Do” in a new location.  However, Atlanta, Georgia is home to two companies that have an enormous international presence.  I run into them all over the world and wanted to learn more of their “stories”.

It’s hard to know what to call “The World of Coca Cola” – a strange blend of a museum, theme park, and tasting room.   Lines are long to visit its newest home, opened in Centennial Park in 2007. Thanks to Coke’s long history of advertising, the venue played on nostalgia by displaying old bottles, posters and ads.    Inside, the first movie shown to all visitors was a longer take of the feel good message shown before most films in theaters.  A room of past promotions documented changing drink habits.  An ad from the 1950s suggested 16 oz of Coca Cola should serve three people.  Today, that is a standard size drink for an individual – possibly one source of our obesity problem.
Cheesiest by far was the dramatic revealing through a smoke screen and flashing lights of the vault containing Coke’s secret formula. No mention was made of the cocaine content in the original recipe nor the move to high fructose corn syrup.  One section contained  hate mail received by the company in 1985 when it tried to change the formula to New Coke, a move that lasted only 79 days before Classic Coke was returned to the shelves.
A highlight for most visitors is the free tasting section with coke products from around the world.  Over 100 dispensers provided  coke, lime, orange and root beer drinks made by subsidiaries, representing a small portion of the 3500 beverages sold by the company.  A new Coca Cola had just debuted, using sugar again rather than corn syrup and will be sold in an environmentally friendly green can.  Truthfully, we couldn’t discern a notable difference.
The most interesting section displayed personal reflections of “My Favorite Coca-Cola Moment” – sharing a coke with a child at summer baseball games, father working in a factory and returning home with a coke, finding a Coca Cola offered in the wilds of Africa.  The last story spoke to my experiences.  Since Coca-Cola is offered in every country in the world except Cuba and North Korea,  I’ve seen its ads everywhere I’ve traveled.  My husband’s favorite story is the gentle tug-of-war with his sister-in-law in Tikal, Guatemala in 1975 over the last cold Coca Cola at the restaurant.  Before the pervasive availability of bottled water, I drank Coke regularly in developing countries.  It’s always a taste of home and a reminder of American industry.

Also in Atlanta is the headquarters of CNN, first TV channel to provide 24 hour news service and another company with strong international presence.  On the tour, the guide emphasized its growth from 1.2 million viewers in 1980 to over 2 billion today worldwide.  In 1985, CNN International began and is now in over 200 countries.  Thanks to satellites and its programming, I have checked Dallas weather from Vienna, Austria, watched U.S. election returns in Cairo, Egypt,  and obtained basketball scores while recovering in a hospital in Tegulcigalpa, Honduras.  In a small, windowless hotel room near the bus station in Pnohm Penh, Cambodia,  a report on American oil prices on CNN brought familiarity into a foreign world.  It was there before wifi and is more available even today.
No programs were in action on our visit but studios, research desks, and a demonstration weather map were available for viewing.  We learned meterologists can wear an invisibility cloak to blend into the map.  Teleprompters carry 150 -175 words per minute of script.  All writing must be approved which can take 8 hours or 5 minutes depending on how fast the news is breaking. 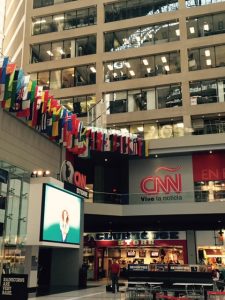 In the news room, scores of screens flashed competitor’s news as well as headline news of CNN (HLN).  Some screens reflected a stationary camera that continually films one location such as Tahir Square in Cairo where action can form quickly.  Several writers were eating lunch at their desk and one clever employee had his tweet handle displayed on his desk for tourists looking down on the news room.  Since most of the weekly news programs are filmed in New York City, I had little chance of encountering my favorites,  Anderson Cooper or Anthony Bordain.
With 35 bureaus around the world, CNN takes its newsgathering seriously.  Through CNN International, HLN, CNN Espanol, and CNN Domestic, most of the world can watch developing news.  Networks have also been established for Airports and for individual countries including Turkey, India, Japan, Chile, and the Phillipines.  It’s no wonder I keep running into it.

For investors who want international presence without foreign stocks, both Coca-Cola and CNN’s parent company, Time Warner, provide this.  Coke is 4th on the list of World’s Most Valuable Brands and the only one in the top 5 that is not a tech company.  I’m not recommending investments!  But I am proud that these two companies compete well internationally, providing me and millions of traveling Americans a familiar experience.

Web site for Tour of CNN in Atlanta, Ga.