WRITERS’ HOMES MAKE INTERESTING DESTINATIONS
American writers Ernest Hemingway and Eudora Welty never met although they were contemporaries.  Hemingway was only ten years older and lived a dashing and frantic life for 62 years with homes and wives around the world. Until her death at 92 years, Welty never married and remained in the home where she was raised.  Yet, they shared some surprising habits as evidenced by tours of their homes in Havana, Cuba and Jackson, Mississippi.
Hemingway spent his winters at Finca Vigia, fifteen miles east of Havana, where he wrote  “The Old Man and the Sea” and “For Whom the Bell Tolls”.  Our taxi driver knew exactly where to go.  As we approached the residence through a tropical forest of flamboyan trees, urban noises diminished. Perched on a hill with Havana in the distance, the house’s open design allows a constant breeze to cool the island’s high humidity.  Cuba confiscated the property in 1961 even though Hemingway was on good terms with Fidel Castro.  The home has been a major tourist attraction for over 50 years. 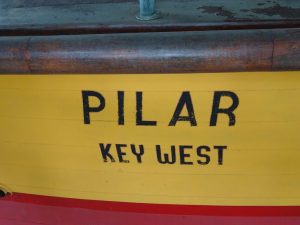 Visitors are not allowed inside the home but from the large windows and doorways, it’s easy to view Hemingway’s art collection, including bullfighting paintings and posters,  mounted gazelle and antelope trophies, and his portrait with a downed African leopard. The furniture appears comfortable and well-worn. The typewriter resides in the bedroom, chest high on a bookcase where Hemingway wrote standing up. Outside, his fishing rods rest upright in a rod holder, ready for use

while the famous boat, Pilar, hangs in dry dock.  We expected him to walk out anytime on his way to the sea.

Eudora Welty’s home is maintained as if she had just run to the grocery store.  This was easy to do since Ms. Welty lived in the home until her death in 2001.  She had already given her residence intact to the State of Mississippi in 1985.  Located across the street from Belhaven College and in a well kept neighborhood, this historic site is hard to pick out from the neighbors.  Inside, rooms are cozy with a feel of your grandmother’s house.  All of her books were written on a favorite typewriter in the upstairs bedroom.  Spread across the dining room table, though, are white sheets of paper with cut paragraphs pasted on them – the model for our current computer’s “cut and paste” feature.
Hemingway and Welty shared a love of books – 8000 for him and 5000 for her.  In Welty’s home, books were literally everywhere – on sofas, tables, bookshelves, and beds.  Friends would have to move books from chairs in order to sit.  From descriptions of visitors to Finca Vigia, Hemingway’s books were equally scattered in his day, including large art books placed in a chair to support his ailing back.  Today, his literary collection is neatly stored in bookshelves in almost every room.  Welty must have been a fan of his as she had several Hemingway biographies in her collection.
Both writers had literary friends.  Welty’s included our country’s best Southern writers – William Faulkner, Katherine Anne Porter, Walker Percy, Flannary O’Connor.  In her home, a letter from British writer, E M Forester, reflects her correspondence with those she admired.  Hemingway’s list drew from his time in Paris where he joined the elite artist crowd around Gertrude Stein, James Joyce, Ezra Pound and even F. Scott Fitzgerald.
Few of his old friends joined Ernest in Cuba but those who did were treated to his martinis and Cuban rum drinks.  At his home, Hemingway’s liquor bottles remain on a tray, some still open.  On the grounds today, fresh pineapple is crushed into juice and used to make daiquiris for sale to tourists.  Eudora also partook occasionally of her favorite bourbon, Makers Mark, stored in an open cabinet near the kitchen.  She felt it kept the conversation flowing with friends and enhanced her Christmas eggnog.
Welty and Hemingway began as journalists, a position that taught Hemingway his famous style of writing – short sentences and active verbs.  Welty’s experience as a WPA photographer sharpened her observational abilities which she used extensively in her writing.  Their writing styles are both considered descendants of Mark Twain’s straight forward storytelling.   Each won Pulitzer Prizes (hers for “The Optimist’s Daughter and his “The Old Man and the Sea” and Hemingway the Nobel Prize for literature in 1954.  In his home, telegrams of congratulations from Cuban friends, ministers and writers are displayed. Eudora had stored her Pulitzer downstairs.
I can only surmise that Welty and Hemingway would have enjoyed each other’s company.  Both loved to talk.  It’s fun to imagine their conversation – full of literary allusions, liberal causes, travel stories and fueled by a drink or two.  Visiting their homes makes that image possible.
Eudora Welty’s Home
Hemingway Home in Havana, Cuba