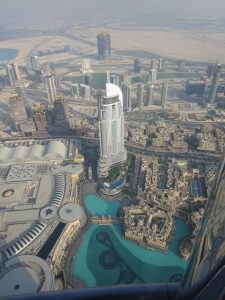 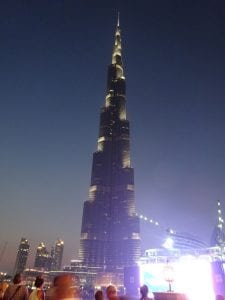 I once had a Dallas friend suggest going to DFW Airport in the mornings just to watch the Emirates Airlines Dubai-DFW flight land.  The airline uses the Airbus A380 for its long distance hauls, the giant of all commercial planes that seems to lumber onto the runway.  It can hold 550 passengers and the wingspan snugly fits into a football field.   I always wondered who flew that exotic route until their fares got cheap and an opportunity beckoned.  For under $900, we booked tickets to Ethiopia with an overnight stay in Dubai.
The flight between DFW and Dubai is long – 14 ½ hours going and 16 hours returning.  Yet, the Airbus offered a great movie selection and a surprising amount of room, even in the economy section.  Plentiful bathrooms with soft lighting, adjustable water temperature, wood trim and faux marble countertops were available.  Food menus offered Middle East and western choices.  Emirates Airlines has a force of 13,000 international attendants, all living in Dubai.  Only about 300 are Americans.  On the flight going, we had representatives from twelve countries, including the United Kingdom, Ukraine, Singapore and Australia.  This diffusion of work among “foreigners” would be typical of everywhere we went in Dubai. 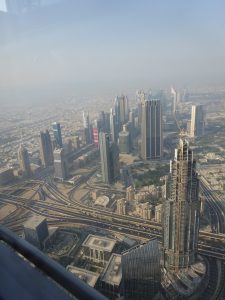 Thanks to our American passports, customs at the Dubai airport was almost a wave through, requiring only a photo of our iris to be taken.  The taxi driver to our hotel was Pakistani, as were the rest of our drivers.  Another taxi ride took us to Burj Khalifa, the tallest building in the world, opened in 2010.  It is located in the Dubai Mall built in 2008.  To make our 4:30 appointment, we had to hurry through the huge shopping arena filled with familiar stores such as The Pottery Barn, Gap and Banana Republic.  Yet, scores of gold stores and Arabic women’s clothing offerings confirmed our presence in one of the Arabian world’s great shopping cities. 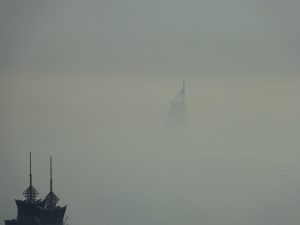 The crowd going up the Burj Khalifa was a mix of foreigners, mostly independent travelers.  The only tour I saw was of Chinese.  A smooth one minute elevator ride ascended, gently stopping at the 124th floor.  Viewing was available inside and out.  The best weather in Dubai begins in October with clear skies.  Unfortunately, our September visit was still during days of dust storms.  Visibility was adequate for about two miles, allowing us to take in the wonder of Dubai architecture but not the famous Palm Islands built into the Persian Gulf.  In the distant, the Burj Al Arab, the world’s only seven star hotel, appeared to be sailing through the dust. 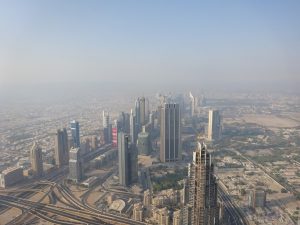 Telescopes were available for real time viewing but also revealed the land before development – a scant 10 to 15 years ago.  Until 2004, when Mohammed bin Rashid Al Maktoum decided to make his country into a business showpiece, the barren desert reached up to the shores.  Since then, constructions cranes can hardly keep up with the building.  At one point, Dubai had one-fourth of the world’s cranes working on its development.  Despite the added hotels, the average price is still $300 per night, going as high as $1600 for a night at the Burj Al Arab.
Our glasses fogged up from the heat when we stepped onto the balcony area of the Khalifa.  Selfies dominated as visitors of all ages and colors wanted photos of their faces silhouetted against building tops and hazy sky.  Narrow windows were available for those who wanted to slip cameras through and take pictures without glare of the glass.   Upon return to earth, we heard a call to prayer in the mall but without many apparent takers.
Our next Pakistani taxi driver provided inside information on living in Dubai.  Workers from different countries self-segregate in housing and even in sending their children to schools with their own teachers.  They won’t combine into a public school , he said, as religion must be taught there.   Most Pakistani workers are men and don’t have family in Dubai because of the expense. The population of the United Arab Emirates is about three million native born and six million foreigners. 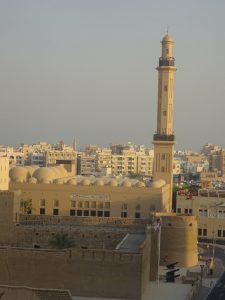 We arrived at the Dubai Museum in the tiny historical area that has been preserved.  Located in the oldest building in town, the fort museum is well done and takes you from Bedoin tents to modern architecture.  A video documented changes in the city by decades.  And a display of 3,000 year old pottery found in the area confirmed the location’s long history of trade.  A free Koran was given at the museum’s exit.

We had hoped to make the gold souk but lack of sleep caught up with us.  Instead, we walked the streets near our hotel, filled with gold stores, each store filled with buyers.  Dubai was an early trading center for jewels beginning with pearls but now gold dominates.  Prices were by the ounce but we weren’t in the market – at least not that night.  But it had been a beautiful introduction to Dubai’s offerings and maybe there will be another chance, especially if Emirates Airlines stays competitive.