In Ethiopia, the word meskel has a triple meaning.  It refers to a beautiful yellow daisy that blooms in September.    Flying into Ethiopia’s capital, Addis Ababa, fields of the golden flowers were visible from the air.  On a spiritual level, meskel means cross in Ge’ez, the ancient language of the Ethiopian Orthodox church.  The final understanding of Meskel is the festival held in September to celebrate the finding of the true cross in the fourth century AD by Queen Helena, mother of Constantine, First Christian Roman Emperor. Tradition holds smoke from a bonfire in Jerusalem led Helena to find the cross on which Jesus was crucified.  Parts of this cross are claimed in churches throughout Europe and Ethiopia’s remnants are kept in the Gishen Mariam monastery to the north of Addis.
We knew our last day in Ethiopia coincided with the Meskel Holiday.   It is celebrated throughout the country but in Addis Ababa, the large Meskel amphitheater shaped square fills each year with half a million devotees who await the setting of the sun when candles are lit and a bonfire or demera ignited.  Atop the giant pyre are meskel flowers and inside a cross will burn.  The direction of its collapse brings various predictions for the year.  Most tourists watch the festivities from specially built stands but thanks to a fun group of young Rotarians, our experience was standing for three hours in the back of the square, surrounded by Ethiopians of
various hues but of the same ilk.
Hiruy Zemichael and  Semeone Tegegne picked us up at 3 p.m.  They are members of the newest Rotary Club in Addis, one of ten in the city.  Their club is bilingual, meaning they will conduct the meeting in English if there are any visitors.  I was sure they had studied abroad as their conversation made easy reference to American colloquial expressions such as “what’s happens in Las Vegas stays in Las Vegas” and they could express dismay at the idea of a Donald Trump presidency.  I was assured their fluency resulted from hours of watching American movies, comedians and reading English books and newspapers.
Through the evening more Rotarians joined us including Ruth Dressiegn, who had just returned from New York where she spoke to a UN committee on the need for more youth to be involved in the sustainability project currently being considered.  Another young woman, Rahel Getachew, will travel to the U.S. soon to represent all of Africa’s Rotaryact clubs.  The club members were all educated, working in technical fields as well as social services.  And, all wanted us to understand the Meskel event and its significance for the country.

Streets closings made easy walking as we approached the square and candles were distributed. The square had almost filled even though we arrived an hour early.  A large military presence watched from strategic points as fire trucks and ambulances awaited the call. Large open space in the middle would later welcome bands, church choirs, veterans, and rows of priests and deacons.  A large central viewing platform held an impressive array of dignitaries – Abune Mathias, 6th Prelate of the Ethiopian Orthodox Church, Teodros II, 118th Pope of the Coptic Orthodox church in Egypt, and Dr. Mulatu Teshome, president of Ethiopia. 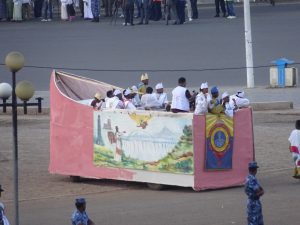 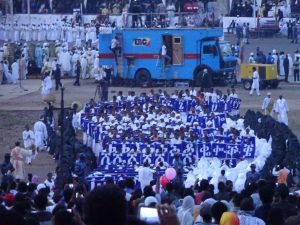 Through the darkening late afternoon, waves of chanting, swaying, dancing choirs passed in front of the stage.  Floats reflected the story of Queen Helena’s discovery of the true cross.  Those with hearing disability performed their sign language.  Occasionally, the crowd sang and clapped along with well-known chants.  And, a marching band complete with tubas and brass melded into the big parade.  It was a beautiful blend of a mass at St. Peter’s square in Rome and Macy’s Thanksgiving parade.
Since I couldn’t see easily over the crowd, I relied on photos and movies taken by Semeone to enjoy the details below.  I could hear the Patriarchs and President talking.  Amazingly, their speeches were translated into English.  President Teshome talked of Egypt and Ethiopia being joined by the Nile River.  The Ethiopian Patriarch spoke of love between the orthodox communities.  There was even mention of climate change and separation of church and state. 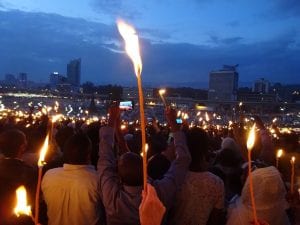 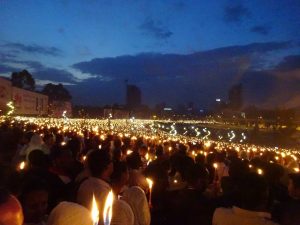 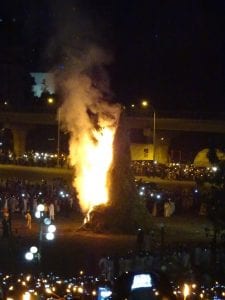 In the early evening dark, our candles were lit from neighbor to neighbor, a process that began at one end of the square and swept across the crowd like a moon rising.  Patriarch Mathias slowly walked to the bonfire, circled and lit it, creating an immediate heart of flames amongst us.  For the moment, all were united in its light.
The spell was broken as our Rotary friends protected us from the large crowd exiting.  On the walk back, they described the meal their extended families would share the next day with traditional food and how all would dress in white.  Their homes would have small bonfires as would most hotels and restaurants.  One suggested it was similar to our Thanksgiving Day gatherings.
The Meskel celebration is one of Ethiopia’s finest.  We were lucky to join this 1600 year old tradition, guided by a new generation of Ethiopians.  It was a wonderful fusion of old and new and Ethiopia should be proud of both.

One Response to “Celebrating Meskel in Addis Ababa, Ethiopia with young Rotarians”