This is the third of a three part series on a road trip through the South where we explored the three Cs – Civil War, Civil Rights, and Southern Charm.

The Civil Rights movement of the 1960’s gave meaning to rights won 100 years before in the Civil War.  Despite passage of the thirteenth and fourteenth amendments to the U.S. Constitution in the 1860’s to abolish slavery and to prohibit state laws limiting the rights of citizens, Southern states managed to bring back white privileges to the detriment of black citizens.  Until the civil rights movement gained momentum, African Americans in Paris were segregated in schools, restrooms, water fountains, and couldn’t even eat in the restaurant inside the Kress department store downtown.  The energy and grit behind the movement ignited in the heart of Dixie and no tour of the South is complete without visiting some of the pivotal sites where individuals bravely resisted inequality under the law. 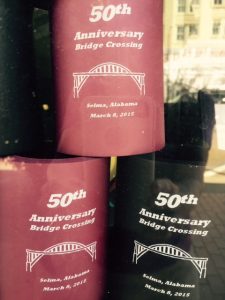 Thanks to the movie, “Selma”, the effort to walk from Selma, Alabama to Montgomery in 1965 to protest voting rights limitations on blacks has been documented.  The 50th commemoration of this event had just been celebrated this spring and memorabilia was still available for purchase.  Together with a small group of school children and an African American couple, we walked slowly over the Alabama river on the Edmund Pettus bridge, ironically named after a Confederate officer who fought at Vicksburg .  It was only made a National Historic Landmark in 2013 and seemed to best illustrate the road to equal rights is won one step at a time.
Montgomery, Alabama surprised us.  Despite having only one commemorative sign as recently as 2000, the city has now embraced both its civil war and civil rights past.  Standing placards document events such as the telegram that started the War Between the States and another where Rosa Parks refused to give up her seat on a bus to boarding whites in 1955.  At the Rosa Parks Museum, an imaginary ride in a life size bus gives minute to minute details of Ms. Parks’ confrontation with state laws.  Bus drivers at the time were quite powerful and could wear guns.  A black often had to pay his fare, walk outside the bus to the back door, and pray the driver didn’t depart and leave him stranded.  Parks’ arrest led to the year-long Montgomery bus boycott directed by Martin Luther King, Jr.

Dr. King’s involvement in the Boycott was fortuitous.  At age 26, he was pastor of the prestigious Dexter Avenue Baptist church, where many of Montgomery’s black lawyers, physicians and teachers attended.  Thanks to the presence of Union soldiers after the Civil War, the church was able to get title to this prime land just three blocks down Dexter Avenue from the state capitol.  Previous pastor, Vernon Johns, had been a fierce opponent of segregation, meaning the congregation was prepped for action. Dr. King held tight to his pacifist views but was also determined to see the boycott through.

At the Dexter Church, our tour guide, Reba, brought back the spirit of the times.  We began the tour singing “This Little Light of Mine” and ended it encircled, holding hands with “We Shall Overcome”.  In between, Reba helped us understand how young Dr. King was when he arrived (25), how cars were purchased and used by churches to transport black employees to their work, and even the appearance at the church of former Governor George Wallace in 1979 who apologized for the pain he caused during his tenure.  Truthfully, it was thrilling to stand at the pulpit and imagine a full house awaiting inspiration from Dr. King.  The church still is active but worried about the aging of its congregation.

An institution I have long admired is also headquartered here.  The Southern Poverty Law Center directed much of the litigation needed to enforce the 1964 Civil Rights Act and still pursues cases when needed.  Across the street, the Center commissioned a Civil Rights Memorial designed by Maya Lin, creator of the Vietnam War Memorial in Washington, D.C.  The fountain, shaped as an inverted cone, provides a poignant timeline of events from the 1954 Brown vs. Board of Education decision to MLK’s assassination.

The greatest testament to the Civil Rights Movement on our trip was the numbers of African Americans in all strata of Southern life – businessmen in Atlanta, hotel receptionists in Kennesaw, Georgia, bus drivers in Montgomery, TV cameramen at CNN’s headquarters, teachers leading classes of school children on field trips, diners in upscale restaurants and tourists themselves.   We stopped for dinner in Meridian, Mississippi where three northern civil rights volunteers were killed by Klansman in 1964.  What we found in 2015 was a Thai restaurant filled with whites, blacks, Asians, and Hispanics.
The Civil Rights struggle will  never be finished.  Moslems, gays, and immigrants face some of the same hatred and fears suffered by African Americans.  But a trip through the South gives perspective as well as hope and encouragement.