Two highways skirt the edges of McAlester, Oklahoma, 100 miles north of Paris, and few travelers slow down except as required by stoplights.  Yet, this town of 18,000 inhabitants owns a surprising history full of railroad construction, Indian Territory rights, coal mines, Masonic presence, Italian immigrants and even the beloved Will Rogers.

It’s the hills of downtown McAlester that surprises visitors first.  Atop the highest one is the tallest structure in town – the McAlester Scottish Rite Masonic Center.   Due to Masons’ prominent past when 10% of the men in the U.S. belonged,  Masonic Lodges and Temples abound across the country and this one is impressive.  The McAlester branch has had so many members in the past, its building was enlarged more than once ending with construction of the second largest Masonic stage in the U.S. and a 3100 pipe Kimball organ.  The Temple is appropriately proud of the world’s largest scene backdrops designed by prolific artist, Thomas Gibbs Moses.  These enhance the moral lessons acted out for each of the 32 degrees. 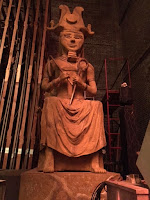 A painting of former member Will Rogers is displayed in the palatial lobby along with a donated Frederick Remington statue.   Upstairs, the beautiful Egyptian themed auditorium is still used for the morality plays but also for local concerts and events.  Behind the scene are prop rooms filled with heavy silk and satin costumes, shelves of crowns, sandals, wigs, and swords.

The dining hall can feed 500.  In the small chapel, a Bible, Koran, and Torah are open on an altar emphasizing the Mason’s requirement of a belief in a Supreme Being but without a commitment to a certain religion.  Our guide emphasized no alcohol, political talk or religious persuasion is allowed in the center.  At one end of the building, a childhood speech disorder clinic operates as one of over 100 that have been begun by the Masons.  Its commitment to public education was also emphasized as well as transport of area children to the great Shriner and Masonic Hospitals. If you’ve ever wanted to know more about the largest fraternal organization in the world, a tour of this beautiful building is a great way to get started.

Down the street is the headquarters for the International Supreme Assembly of the Rainbow for Girls, a noble name for a Masonic organization started in McAlester to provide some of the benefits of their tradition for girls.  Truthfully, I was shocked to discover Rainbow Girls still existed.  Begun by the Rev. William Marks Sexon in 1922 in McAlester,  its heyday in the 40s and 50s saw chapters chartered across the country, including my hometown of Plainview, Texas.  I joined for a brief time, mainly to see what the initiation rite was all about.  Today, it still has a Supreme Worthy Advisor with about 10,000 members in the U.S. and several foreign countries.   If you’re nostalgic about the organization and its ceremonial hall or if you want to step back into the 50’s, visit this well preserved museum of a building.

Signs of McAlester’s history play out in the town beginning with its name.  J.J. McAlester used his knowledge of nearby coal reserves and his wife’s Native American heritage to purchase land.  He then convinced the railroad to build the track from Kansas to Texas through his holdings.  The town was later named for him.  In the Old Town section to the north of downtown McAlester, his original Mercantile Building still stands and houses the popular Whistle-Stop Bistro that deservedly does a booming lunch business.
Carl Albert Freeway is named for the hometown boy made U.S. Speaker of the House.   It is no surprise then that McAlester is home to an ammunition plant and center.  You probably wouldn’t want to be here during a war, though, as most of America’s bombs are made nearby.

The small town of Krebs borders McAlester’s east city limit and is well known in the state for its Italian restaurants.  Italian immigrants came in the late 1800s to work in the dangerous Indian Territory mines.  Oklahoma’s worst mining disaster occurred in Krebs in 1892 when 100 miners died.  As coal played out, some immigrants opened restaurants which still serve traditional pasta dishes and a local favorite – lamb fries or fried sheep’s testicles.    The biggest surprise is the small Lovera’s grocery store established in 1946 that is filled with Italian favorites such as dried pasta, chocolate, biscotti, homemade Italian sausage, cheeses, and, of course, lamb fries.  It was quiet the morning we visited but apparently, busloads of tourists will drop by for this authentic Italian experience.

McAlester will never be a major tourist destination but its proximity to Eufala Lake brings in enough visitors to support a nice variety of experiences.  It’s definitely worth a turn off the major highways.