Henry Clay Frick was a very wealthy man.  As one of the “robber barons” of the Guilded Age in the 1880s,  Mr. Frick’s close circle of friends included Andrew Carnegie and Thomas Mellon.    He accumulated his large estate through the mining of coal and production of coke used in steel manufacturing.  His company, in partnership with Carnegie Steel, was the predecessor of United States Steel.  With his earnings, Mr. Frick indulged in his favorite pastime of collecting art – especially Old Masters such as Titian, Rembrandt, Goya, Whistler, Vermeer and El Greco.  This premier collection is housed in the 1912 New York City Upper East Side home he had designed to display his art with the intent that it be the showcase for the Frick Collection.
Since 1935, the public has been able to view the beautiful art and stunning home setting that Mr. Frick bequeathed to the people of New York City.  Sculptures of marble, bronze and terracotta fill hallways,   natural light from 5th Avenue streams in and benches beckon all to rest and gaze.  If you’re lucky, an organ master will be practicing for a concert on the hidden Aeolian-Skinner Organ, the same fine company that built the organ at Holy Cross Episcopal Church in Paris.  Our two hours hardly seemed enough. 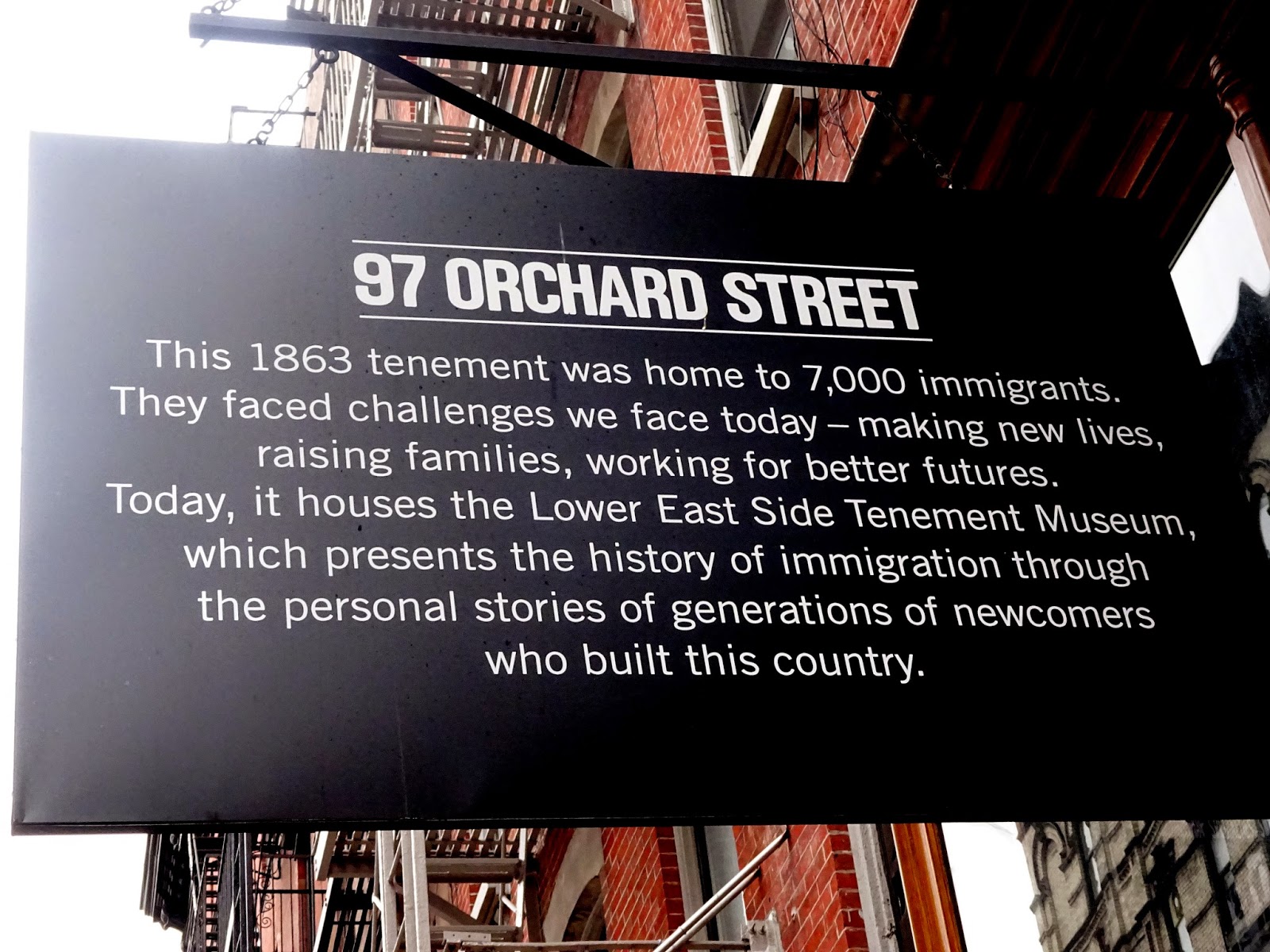 A very different museum building was constructed as Mr. Frick accumulated his wealth.  Located seventy blocks south on the Lower East Side, the contrast between the Tenement Museum and The Frick was stark.  In 1863,  a five story apartment building was built at 97 Orchard Street, originally populated with German  immigrants.  Over seven hundred beer halls filled the streets.  As  Germans moved out, Eastern European Jews and poor Irish took turns filling the apartments.
By 1935, as the Frick Collection was opening, seven thousand tenants had occupied this building compared to only two at the Frick mansion.  It is believed the landlord boarded up the building that same year rather than upgrade according to newly developed code.  When reopened and inventoried in 1988,  the Orchard street property was a treasure trove of every day tenant life.   Developers of the museum researched specific families who had occupied the rooms and created tours with their stories.  Of the tours offered, we selected “Sweat Shop Workers”. 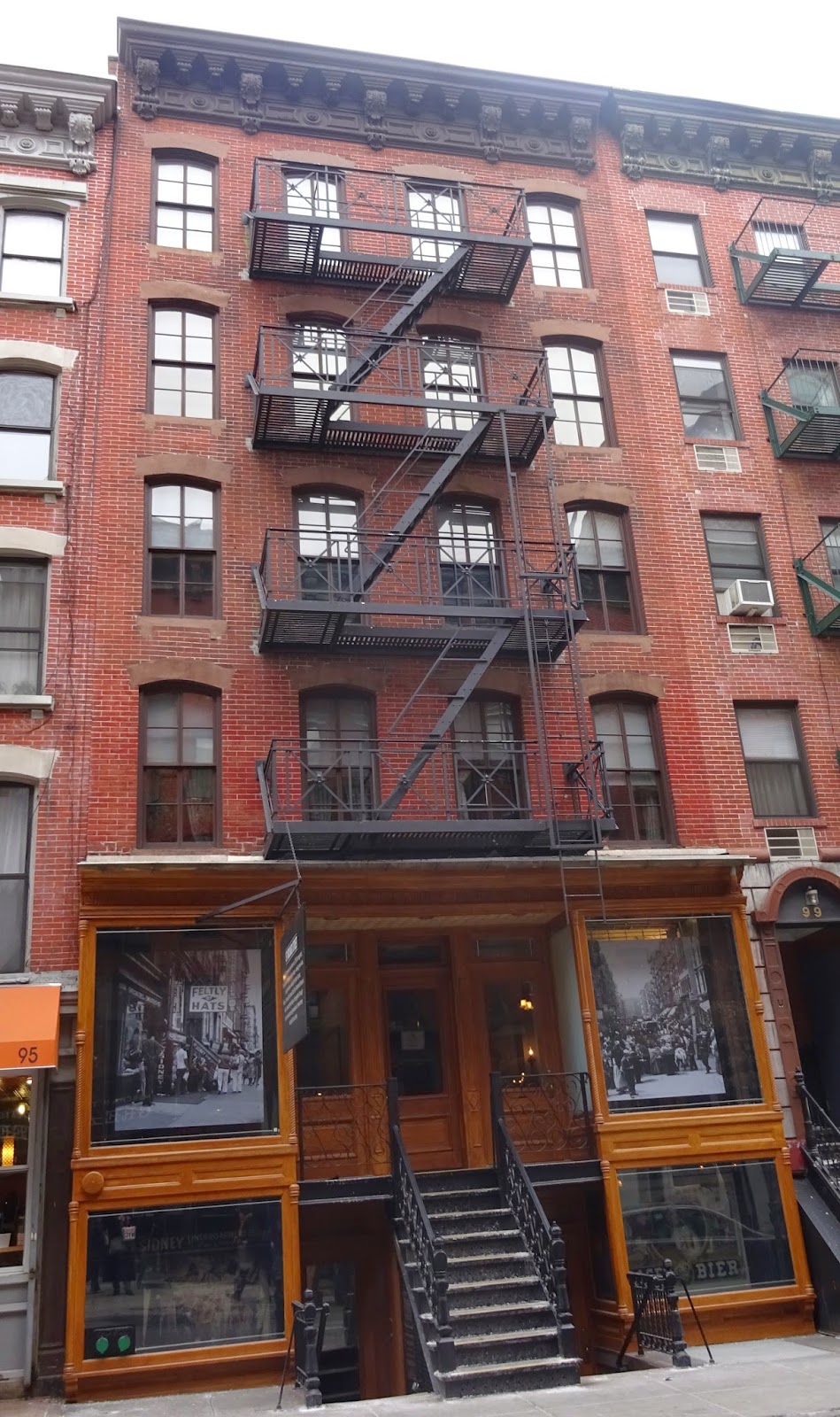 As we entered the dingy building,  light from a single overhead lightbulb gave us the first glimpse of an immigrant’s life.  In the 1880s, the Henry Levine family lived in three rooms where a full scale garment sweat shop employed the family and 3 to 4 more.  Heat, poor ventilation, and work for 14 hour days/7 days a week contributed to high death rates.  Population density in the area equaled 2,791 persons per square block, the highest in the world at the time.  Today, it is only 400.
Most touching were the mementos found in the apartment.  As our guide noted, “Rats’ nests are great archives.”  A set of girls jacks, large garment scissors, admission ticket to the synagogue,  box of Kasha, a Russian cereal, card for an overdue library book and a Kosher cooking jar all made the Levine family more real.
A second apartment revealed much of the lives of Abraham and Fanny Rogarshevaky in 1911.  Sweat shops had shut down after new regulations limited their viability and large factories opened.  Because women were paid less and Jewish men often were required to study their faith, the daughters of this family worked at a garment/shirtwaist factory. With high ceilings, bright light and ventilation, the factory was an improvement for workers.  But they could also now meet and compare stories of working conditions.
And, this is where the stories of our two museums meet – in the often violent atmosphere of the birthing of the American Labor Movement.  Henry Frick hated labor unions.  He fought them tooth and nail, including hiring hit men to attack strikers at his Homestead Plant and erecting a solid wood wall around the premises.  He thought nothing of hiring scab workers and making offers below the workers’ existing salaries.
Across town, female workers at the Triangle Waist Company were submitted to one humiliation after another – clocks purposefully slowed to require more work, being searched as they left to be sure they carried nothing home, 14 hour work days and working above the regulated 7th floor limit in case of fire.  On March 25, 1911, a fire at the company trapped many workers as the door were locked from the outside.  Until 9/11, it was the deadliest workplace disaster in NYC with scenes of women jumping out windows to their deaths.  The disaster galvanized women to join union and socialites  to join the fight leading to improved work conditions.
A good museum teaches, engages, and makes the past personal.  Mr. Frick’s home exemplified the Gilded Age, life of the elite, and the power of money to surround oneself with beauty at the expense of the other 99%.   At the Tenement Museum, it was made clear we owe a great debt to that 99% – immigrants who lived under painful circumstances but persevered so that their descendants could do better.   Thanks to them, we have.
Frick Collection website
Tenement Museum website