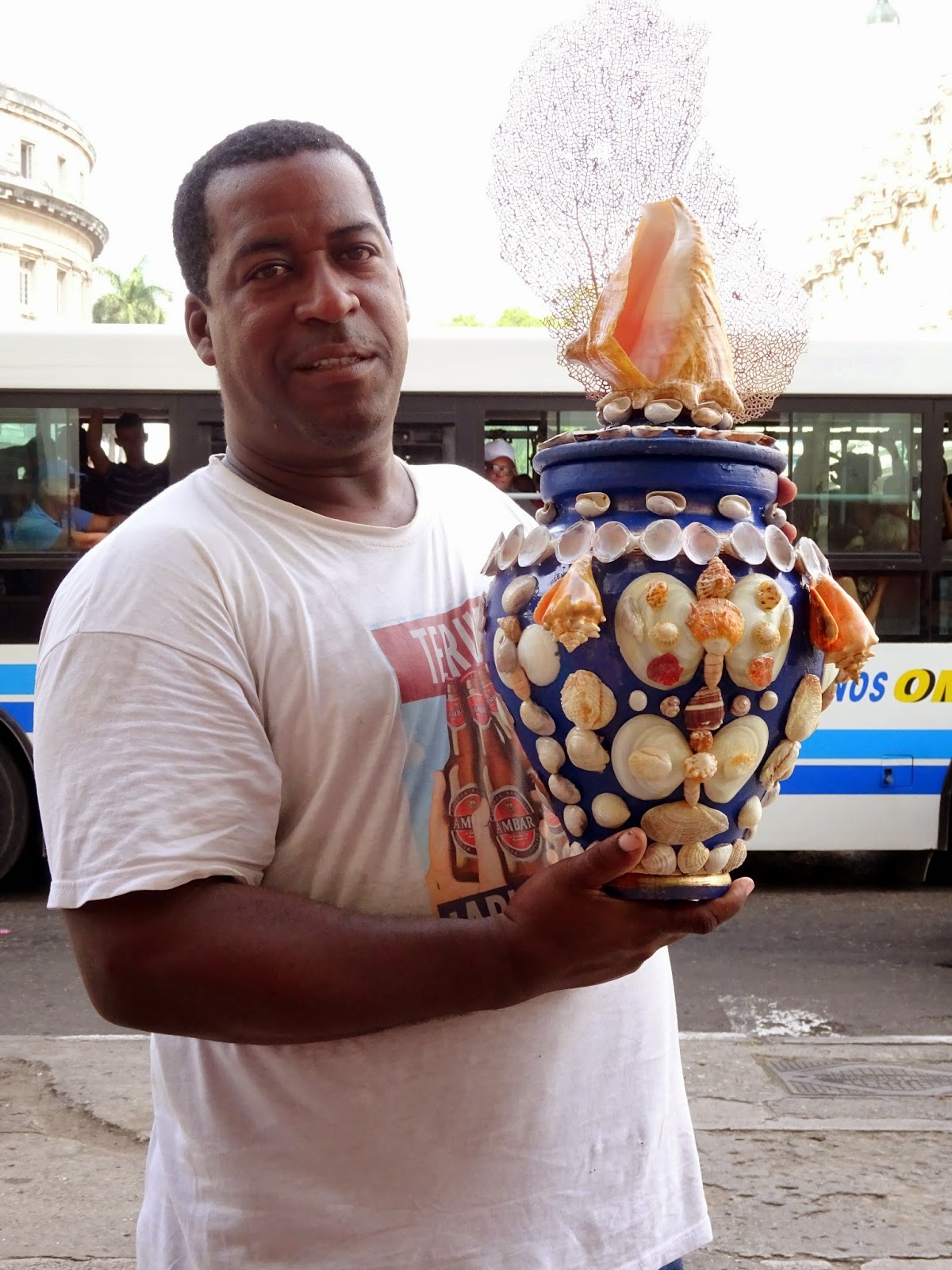 In Parque Central of downtown Havana, a young man of African descent carried a large blue ceramic jar decorated with shells and other treasures of the sea.  Our guide pointed him out explaining the jar would hold the spirits of the Santeria religion, referred to by practitioners as Regla de Ocha or owner of heaven.  We were to learn much more of this belief system during our visit.
In Cuba, slaves’ African heritage flourished more easily underground.  Up top, the bonded were required to become Catholics but in slave quarters, an African could maintain his old practice while recognizing its similarity to Christianity.  A god from the old country often matched up with a saint in the new world.  For those of Yoruba,Nigeria origin, a statue of Saint Barbara could double for an Oricha or deity from that region.  By doing this, a slave would not be at risk of betraying Christianity while maintaining old beliefs.  In fact, many saw no contradiction – just a parallel way of worship.
Today, this double worship is most visible in Santeria, translated as a devotion to saints in Spanish.  In the African community, the devotion is to Orichas or deities often paired with Catholic saints.  There’s even a name for this weaving together of beliefs – religious syncretism.
During a walking tour of the Vedado section of Havana, we turned down a residential street.   On the stoop of one home, a handsome, gray haired man called out to our guide.  They had worked together years before at a museum but hadn’t had much contact since.  He invited us into his modest home for coffee – a time honored Cuban tradition.
Julia Marino was excited for us to meet Larry Vives Lopez as he is a priest in the Santeria religion.  Our plan that afternoon had been to visit the Yoruba Cultural Center to learn more of the Santeria gods and it was fortuitous to first meet a practitioner.   Larry smiled easily and agreed to answer any questions we had.  But first, he wanted to know our birthdays.  Using a divination necklace, a priest can determine which deity is assigned to your day of birth. Both Larry and I belonged to Elegua, owner of the road, the first and last to receive homage, the one who shows a way home – very appropriate for a peripatetic wanderer like me who hoped for good travel karma.  For my traveling companion, Tina Smith, her deity was the maternal Yemaya,  a guardian angel and the one who was a grandmother over grandchildren – equally appropriate for a mother and grandmother of four and one indebted to a guardian angel.
We were charmed by Larry and his son, also a priest, trained by his father.  As a French professor, Larry’s work had waned in recent days, allowing him more time for his pastoral duties.  He chatted easily of other American visitors, one of whom had bragged of having no problems.  Larry sensed otherwise and was able to identify his marital discord without the man’s disclosure.  The American was so amazed he went back to his wife.
For Orisha followers, the home contains the altar.  We again saw the ceramic jars on Larry’s shelves, holding his deity.  When asked if a photo could be taken of him and his son,  he permitted it saying he was more “liberal” than others.  They put on their round hats and green and yellow beads representing Elegua, and posed with bright eyes but no smiles.
They were leaving soon for a conference in Mexico to talk of their religion and Larry needed a ride downtown to check on his visa. The Cuban government had recognized practitioners of Santeria as a religion, making it easier for its priests to travel abroad.   We were going to the Yoruba Cultural Center anyway and all squeezed into a taxi.
On the second floor of the center, 29 of the 401 Orishas or gods were manifested by carved figures with explanations for the powers of each.  In addition, many had references to the Catholic saint who most resembled the god.  In front of some of the figures were baskets with offerings made by believers.   No photos were allowed.

Downstairs, a store sold beautiful ceramic vessels, beads for the various gods, walking sticks wrapped in bright colors, dancing dolls and even a tapestry of the Virgin Mary.  It was tempting to bring home the beads of Elegua but it didn’t feel right.  They belonged with the believers of this historical religion, orally passed down by those who survived an ocean crossing and years of slavery.  Larry Lopez was one of those and with his warm welcome and sincere sharing of Santeria, his beliefs won our respect.