Let’s start with Havana.  All have seen beautiful photos of the 1950’s cars, preserved  when  Fidel Castro’s revolution stopped time in 1959.  Havana’s close association with the United States meant almost all then existing cars were American brands.  Because of the U.S. embargo, import of new cars came to a halt as did car parts.  The latter was solved by ingenuity and determination.  As one  taxi driver told me,  in Cuba, “todo tiene valor” or everything has value.  Their cars were not repaired with genuine Chevrolet parts but somehow have continued to run. 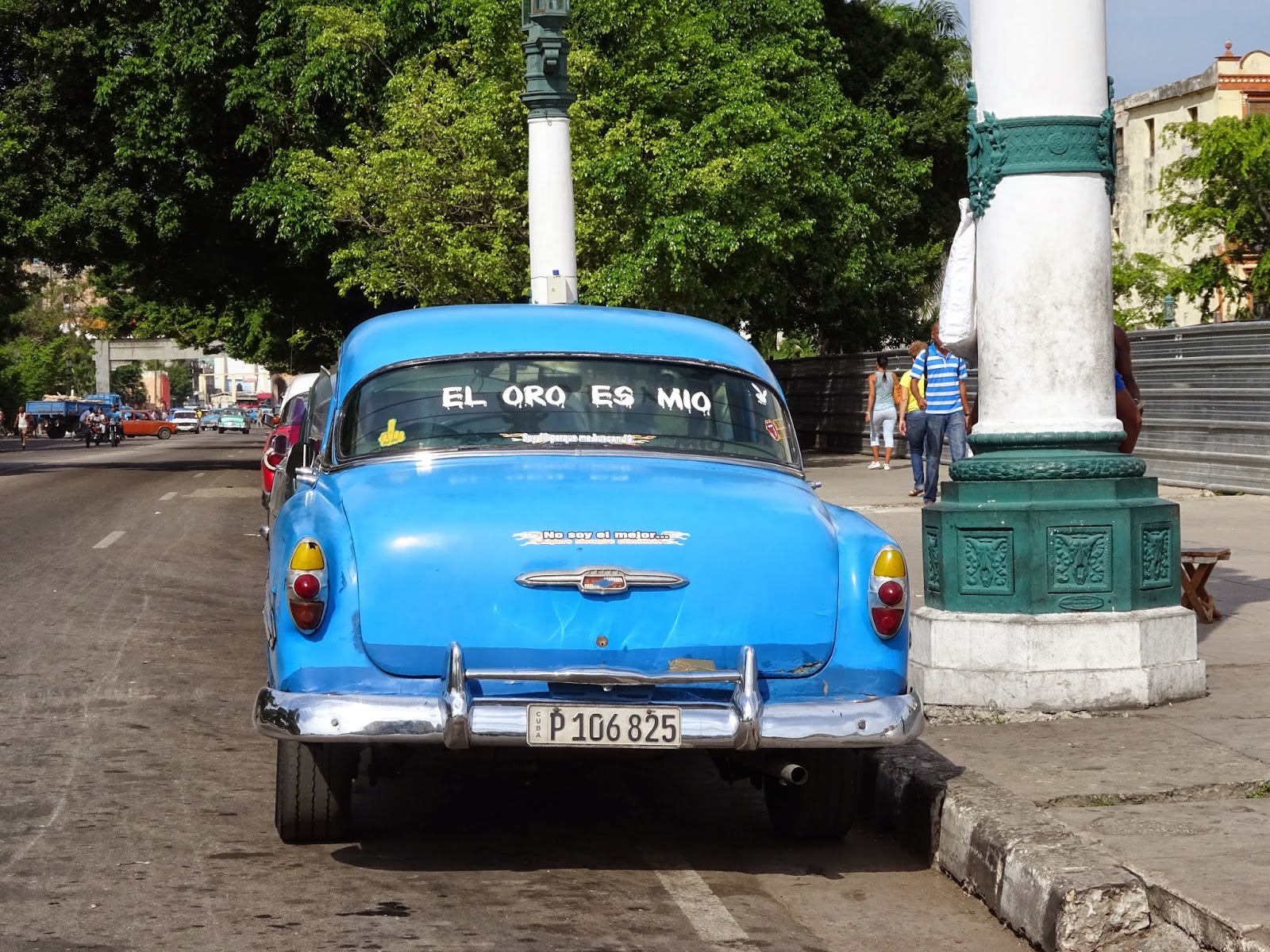 There were far more classic cars than I expected.    As I walked  a block on a fairly busy street in a tourist area, I counted 25 passing by or about half of the cars.  Called almendrones for their almond shape, many are used as taxis on a set route while nicer ones are individual taxis that cost a bit more than their Soviet taxi counterparts.   The famous photos are of those in pristine shape but many look better outside than inside.   These 50’s cars have been declared a national treasure and can be sold only to fellow Cubans.   American collectors may have a long wait to get their hands on these.
In the suburbs, the numbers of Eisenhower era cars diminish and dilapidated Soviet Ladas from the 70’s and 80’s appear.  Originally used to reward workers, these make up much of the used car stock.  Most looked rode hard and put up wet.   It was only in the wealthier Miramar suburb,  where the imposing Robocop shaped Russian Embassy stands with other embassies and ambassador’s homes,  that I saw a BMW, a couple of Mercedes and newer Japanese cars.  They are rare and notable.
On the highway, an array of cars, trucks, buses and horse-drawn carts make their way down an impressive set of highways.  To Cuba’s credit, the Central Highway of Cuba was originally built in the 1920s and extends 700 miles on four lanes linking the island east to west.  Tributaries now run off the main road to smaller towns.  Yet, the amount of traffic on these nice roads was minimal, an indication of how few Cubans own cars and how expensive gas is.  On a bus ride west into the Vinales province, I would occasionally wait minutes before seeing another car.   But ox drawn plows and old tractors with vertical exhaust pipes still dot the landscape, moving at the speed of yesteryear.
What was numerous on the roads were Cubans hitching a ride, lined up wherever the road widened.  It wasn’t important if a bus came first or an almondrone on a set route or an individual lending a hand, or even the classic horse drawn cart.  The latter was often a covered cart with benches down the side and an open back.  One woman lifted her baby stroller into the cart before she hopped in.  These are still in widespread use by passengers and farmers.
Taxis were plentiful and we found  their drivers a law abiding bunch.  All stopped (or at least slowed significantly) at railroad crossings.  Most seemed to stay close to the posted 60 mph speed limit on the highways.   All waited for traffic lights to change.   There was no passing on the hills that I’ve experienced in other Hispanic countries.  They were also chatty and wanted to share their experiences in Miami or tell of their family there.
We got to know Raul, a retiree who drives a taxi for extra money.  His “taxi” carries no sign so negotiations were required for each trip.   Raul’s monthly retirement check is $10.   He still gets a food allowance and free health care but it’s hard to make ends meet.  He sported a 1957 Peugeot with torn seats, rear view mirror that fell regularly,  and shoulder belts drawn over the shoulder only when passing a policeman or a security check on the highway.  The car also stalled at most stops.  But we managed to twice get to San Pedro de la Norte, 30 miles east of Havana, and back.  We took on a hitchhiker at one point to help find an out of the way village with a small Episcopal church.  But we never felt in danger on any of our taxi rides and enjoyed visiting about their other job, their families, and even politics.
When the U.S. Embargo is lifted, Cuba’s snapshot in time will gradually fade.  More tourists will arrive.   Money will flow.  New cars will be imported.  Cubans will be able to purchase them.   What I do hope remains is the lesson learned from Cuba’s years of scarcity, a lesson our throw-away society could use – todo tiene valor.