With a son living in Olympia, Washington,  I’ve become familiar with the Queen of Washington’s  Cascade Mountains  – Mount Rainier.  Its Native American name of Mount Tacoma was shelved in 1792 when explorer George Vancouver named the mountain after his friend, Pete Rainier, a Rear-Admiral in the British Royal Navy.  Probably few of the two million visitors a year to the Mount Rainier National Park realize they’re climbing on a mountain dedicated to an officer who heartily fought against the United States in the Revolutionary War.
Despite its British ties, Mount Rainier is beloved in her home state.  When the snow covered peaks appear in late afternoon, many citizens of Seattle, Tacoma and Olympia pause to look her way in acknowledgment of her majesty. When our family set out to visit Mt. Rainier National Park, she was covered in clouds.  But since the huge volcano creates its own constantly changing weather patterns, we knew there was always the possibility of seeing the grande dame.
What makes Mt. Rainier unique is her 25 glaciers with 36 miles of packed ice – largest remnant of the Ice Age on one mountain in the world.  At 14,411 feet, it’s only the fifth highest peak in the United States but sports more snow than any of the others.  In fact, it’s one of the snowiest places in the world, getting an average annual snowfall of 56 feet. As we ate a late Sunday brunch in the dining room of  100 year old Paradise Inn, the view was of wildflowers, green meadows, and occasional 1,000 year old trees, reminiscent of Switzerland in the summer.  In the winter though, the same large windows would be blocked by deep snow. On a trail, a park ranger pointed out the volcano’s own 18 foot tall weather station that snow would cover in a few months.
Trails began near the Scoop Jackson Visitors Center, a huge gathering place for the many travelers that day.  The crowd reflected America’s welcoming arms, both for immigrants and visitors with a heavy emphasis on Asians.  I thought it a busy day but two employees shrugged and said it was average.  A surprising number of trails were paved – steep but paved.  These paths brought out the families with baby strollers and wheel chairs.  All wanted pictures taken in front of the waterfall, near the wildflowers, or with the big mountain in the background.   Strangers exchanged cameras to take the other’s family photo.  Still, the mountain top had not appeared beneath the clouds.
Mt Rainier is a popular climbing site with about 1,000 annual attempts at the summit but only half successful.  Occasional deaths are inevitable.  Just in May, six experienced climbers died on the ascent.  Most hike to a cabin built for them, sleep a few hours, and leave about 3 a.m. to make the top before snow begins to melt.  I wondered how many were up there that very day.
A second trail through well tended forest ended with a view of the leavings of Nisqually Glacier.  Bare grey rocks disguised the stream running through.  Much of the water appeared to be emerging from a large cave, one of many formed by the geothermal heat from the volcano.  Clouds were lifting but the mountain only teased us with an occasional shrouded peak at the summit.
The day was waning as we began our descent down the mountain’s side, glancing back often.  It was then that Mt. Rainier threw off enough of her wrap to reveal one of her famous three peaks.  We pulled off on a widened part of the road and were quickly followed by several cars.  They had seen it, too.  Picture taking began anew. 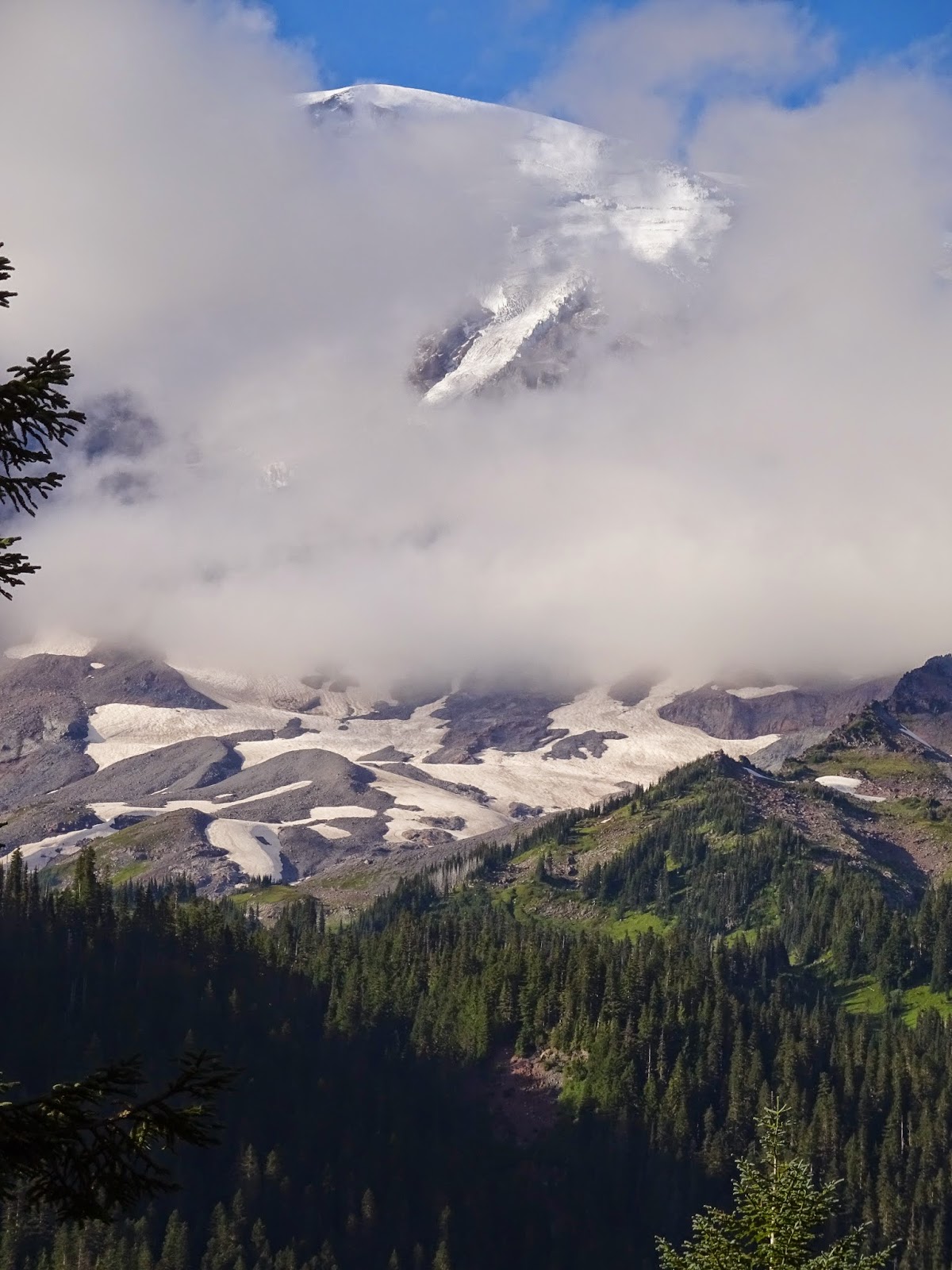 There are warnings about visiting Mt. Rainier National Park.  It is an active volcano – the second most active in the Cascade Mountains after Mount St. Helens.  Thirty earthquakes a year occur beneath its beautiful veneer.  The last eruption was as recent as the end of the 19th century.  It is one of sixteen on the “Decade Volcano” list that identifies those of most concern in the world.  An eruption or even a steam flow from Mt. Rainier would cause much destruction in the surrounding heavily populated areas.  But still we go, by the millions, to get close to her, to feel her heartbeat, to experience her past.  In John Muir’s words, we go to gaze in awe at that “noble beacon of fire”.

One Response to “Why Mount Rainier Beckons”