From chariots in the Roman Coliseum to the Indianapolis  500, racing has provided entertainment through the ages.  Faster is better.  Fastest is best.  I’ve seen horses, dogs, and camels rush to the finish line and sailboats and canoes hustle to be first.  Even plastic toy ducks can dawdle on down to raise money for our local Boys and Girls Club.  I just never considered tugboats as racing instruments – a seeming oxymoron- until visiting Olympia, Washington during its 41st Annual Harbor Day Festival.
“Think about it,” 5th generation Olympian Ralph Blankenship explained.  “Large sailboats needed small tugboats to bring them into port.  And before easy communication, the first tugboat out would get the job.  They had to be fast and powerful.”  In this case, fast is relative.   Blankenship agreed the idea of a tugboat race was a seeming contradiction in terms but has loved watching the laid back pursuits that often top out at 11 knots or 12.5 mph.  Fortunately, there are three motor size categories in the race to protect smaller tugs from larger ones. 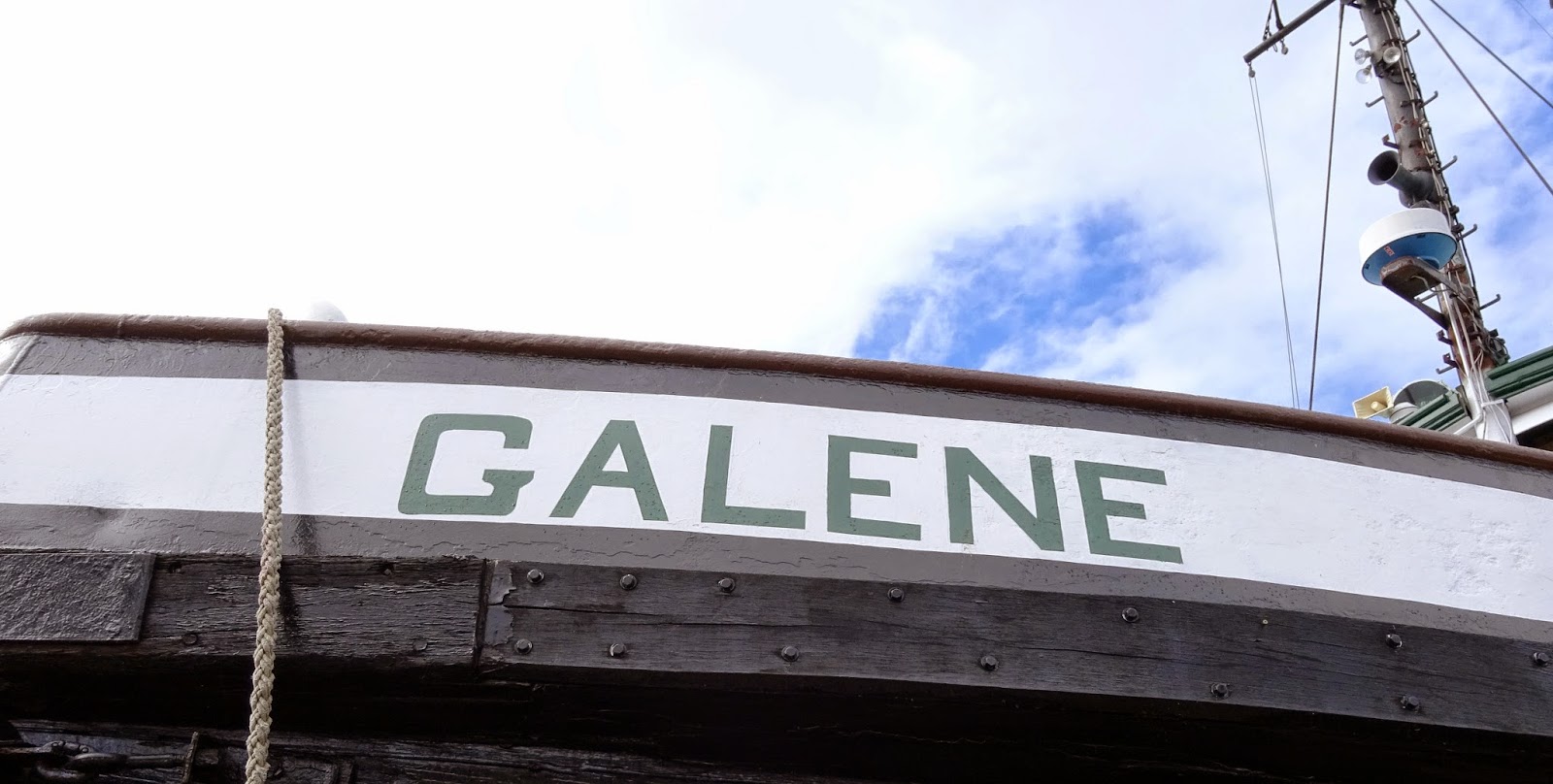 The racing tugboats gather at Olympia’s harbor, where Puget Sound ends under the shadow of Washington’s capitol building.  During  festival week-end, the public can explore the boats, most of which have been working for years or are retired.  One of the oldest and the largest was the Galene, one of 61 boats built by the U.S. Army in 1943 to accompany battleships across the ocean.  Only four remain operational.  Owners Skip and Marty Suttmeir, found the Galene for sale on Craig’s list in 2007, restored it and now live comfortably on it for several months of the year on Seattle’s Lake Union.
In the over 400 HP category, the Galene came in first, winning by a mere 45 seconds over second place Shannon , owned by Captain Cindy Stahl.  The Shannon is a working tugboat, guiding pulp barges to Canada.  Built in 1957 and refurbished in 1977,  the boat changed ownership four years ago.   Captain Stahl’s    trips take approximately 19 hours to arrive in Canada, making the complete journey a three day adventure.  As a consolation prize, the Shannon did receive the “Spiffy” award for  being the neatest and classiest boat in the race.
Owners of the tugs were available to chat with visitors while their family and friends relaxed at the stern or rear of the boats, creating a kind of “tailboat” party atmosphere.  Large umbrellas shaded the gatherings with ice chests readily available.  Old captain friends caught up with each other. One congratulated a younger captain on his appointment to oversee the Seattle Port tugboats.  He would supervise steel tugs with the needed 2000 HP to guide modern cargo ships.
Moored permanently at Olympia’s harbor is the Sandman, a 100+ year old tugboat that has been restored and can be explored anytime.  Some of the original wood remains as does its massive steering wheel.  With a 110 HP motor, the Sandman would have accompanied barges of sand and gravel, brought in to use in construction of many of Olympia’s buildings.
And in case you got carried away with tugboat fever, the 1967 Mary Anne was for sale.  Others could find a selection on Craig’s list.   One owner strongly urged bargaining as he was able to pay $20,000 for a boat originally listed for $80,000.
Since the debut of the first tugboat in 1802, progress in building has led to stronger, more powerful boats.  As recently as 2008, the first hybrid tugboat was built.  Only two or three tugs are now needed to maneuver even the largest of ships.  They are a far cry from those used to great moral purpose in children’s books such as “Little Toot” or “Scruffy the Tugboat” who discovered there’s no place like home after exploring rivers and lakes. 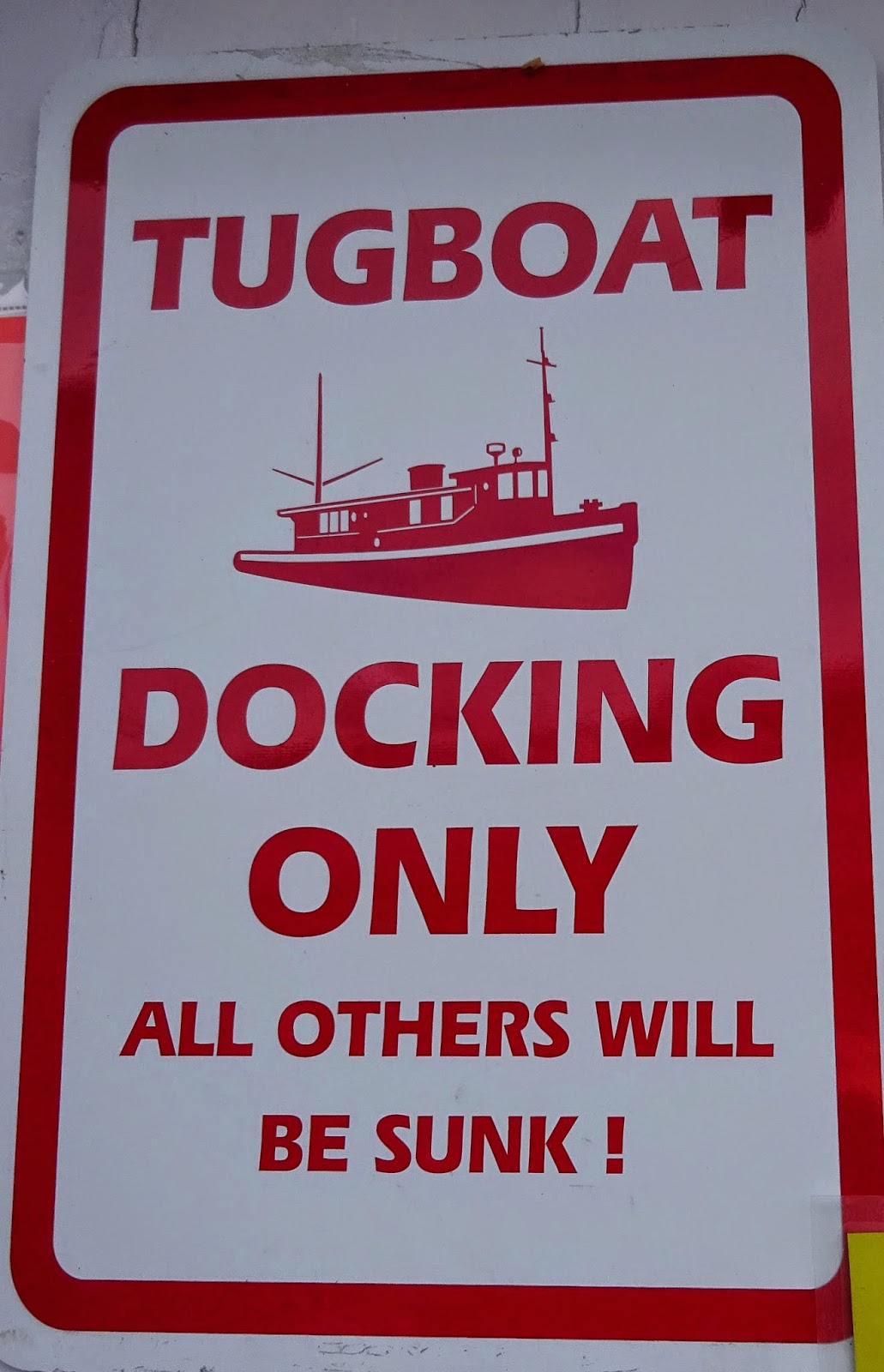 The Harbor Festival also included a large assortment of artist booths, many with nautical themes.  Live music entertained all.  And fresh salmon smoked over an open fire was available for purchase.  We knew we were in the Northwest.  Each town wants a unique and appropriate festival.  Olympia found one with their tugboats – our unsung heroes of the waters that slowly and steadily cross the finish line.