Since 1946, film festivals have been held all over the world –  from Cannes to Venice to Toronto to Sundance with emphasis on first time releases, ethnic origins, genres, independent film producers or even documentaries or shorts.  I’ve seen promotions of festivals from Antalya, Turkey to Ft. Worth, Texas as communities work to attract visitors.  But my cousin takes his Mountain Film Festival on the road to where viewers are most likely to be.

Patrick Moore grew up in Lubbock, graduated with a fine arts degree from Texas Tech, and became a serious world traveler thanks to a job maintaining satellite dishes at U.S. Embassies around the globe.    Even with extra pages, his passport never lasted long and was replaced often.  Wherever he went, Patrick hiked and explored and kept up with climbing feats around the world.  On a whim in New Zealand several years ago, he called Sir Edmund Hillary of Mt. Everest fame.  Sir Hillary invited him to his home and Patrick spent the afternoon with the family, learning more about the famous climber’s life.

Patrick married a beautiful Chilean American Airline attendant and settled in Santiago to raise his family.  He found the outdoor opportunities in South America unparalleled and he and his family often hiked, biked, climbed and camped.  In his backyard is a climbing wall and a shed full of outdoor equipment.   Even before the embassy job played out, Patrick explored bringing a film festival to the far south that played to his interests – mountain climbing and extreme sports.  He found two.

The Banff Film festival licenses 25 films to be available to hosts like Patrick who select those they wish to show at their own locations.  He also picks up the four climbing films offered each year by  The Reel Rock Film Tour.  This year featured a harrowing rock climb by individuals who had missing limbs but no lack of courage as well as the Stonemasters, a 1960s group of self-taught rock climbers who ruled El Capitan in Yosemite National Park.  What distinguishes  Patrick’s two to three day festivals are his speakers and workshops on mountain climbing that accompany the films.

The Mountain Film Festival is shown in 13 South American locations in Chile, Argentina, Brazil and Peru –  just about anywhere young climbing enthusiasts congregate.  Backpackers love it when the festival arrives in town or even on the slope.  Entertainment is hard to come by in most outback areas.   His  most challenging location is at  Aconcagua,  highest mountain in North and South America at 22,000 feet. In February of this year,  Patrick carried his High Definition projector while others packed in a 22 foot inflatable screen.  It took two days of hiking to arrive at the second base camp of the mountain. There at 14,000 feet, the movies were shown on the screen under the stars to 200 grateful and amazed campers.

After years of following Facebook posts on Patrick’s  festivals, I had the opportunity to experience a showing in Puerta Natales, Chile, a town of 20,000 where many launch into Patagonia.  While North Face is his primary sponsor,  Patrick finds local companies to help with overhead costs and to promote the showings.  In Puerta Natales, Erratic Rock, a local hostel/outfitting company, provided assistance with the location and set-up.  Posters of the festival had been hung around town and the local newspaper covered the upcoming event. 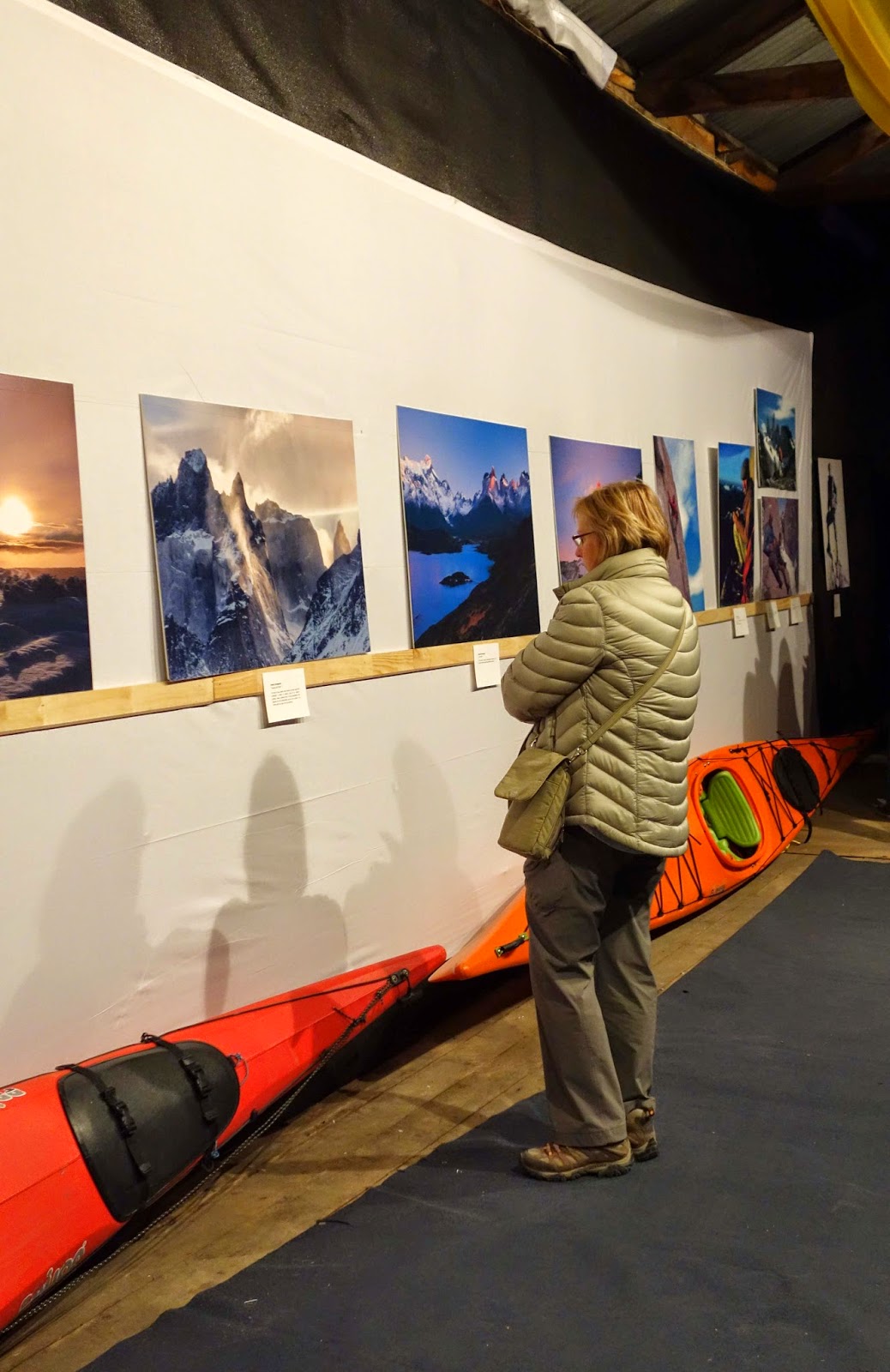 We arrived on a rainy night at a large, metal hanger for a showing of “Towers of Temptation”, a film on the first ascent of the central towers of Torres del Paine in Patagonia 51 years ago.  At the premier showing in Santiago, Patrick had even brought in the film’s director, Leo Dickerson, to speak.  Inside, indirect lighting illuminated walls of powerful photographs of climbers and the towers. Outdoor equipment such as kayaks, mountain bicycles, and tents were displayed.  Young travelers from around the world milled about – visiting, comparing, sharing stories. Some even carried their backpacks as if they had just arrived in town.  Hot cider was served.  By the time of the showing of the first film, the 200 chairs had filled and all settled in for an evening of entertainment far from home.

The Mountain Film Festival shows continue throughout the year, even in  the coldest days of winter in southern Patagonia.  In my last e-mail from Patrick, he wrote enthusiastically of the next showing in Coyhaique, Chile where a Mt. Everest climber and an Antarctica Explorer will be giving lectures along with the films.  His timing is good.  Travels to Patagonia and other parts of South America are up.  And, there’s nothing more exciting than a good mountain climbing story, especially if the mountain is just outside the window.