An entire island of penguins?  How could that not be cool?  Children and adults alike are pulled toward these little guys – strutting their stuff on land, sleek swimmers in the water.   On Magellan Island, on the Magellan Straits of South America, thousands of Magellanic penguins make their summer homes burrowed into the ground.  We got to walk among them on a morning excursion from Punta Arenas, Chile.


There are two ways to travel to Magellan Island, assuming the trip is not cancelled due to high winds.  Pay lots more and arrive on a zodiac boat before the crowds or take the slow Melinka ferry, landing on the island two hours later.  We were in no hurry and enjoyed being on the Straits.  Many young adults in the international crowd chose to catch up on their sleep but we  were happy to listen to the lecture given in Spanish and English by a young woman who seemed to be in charge of us. 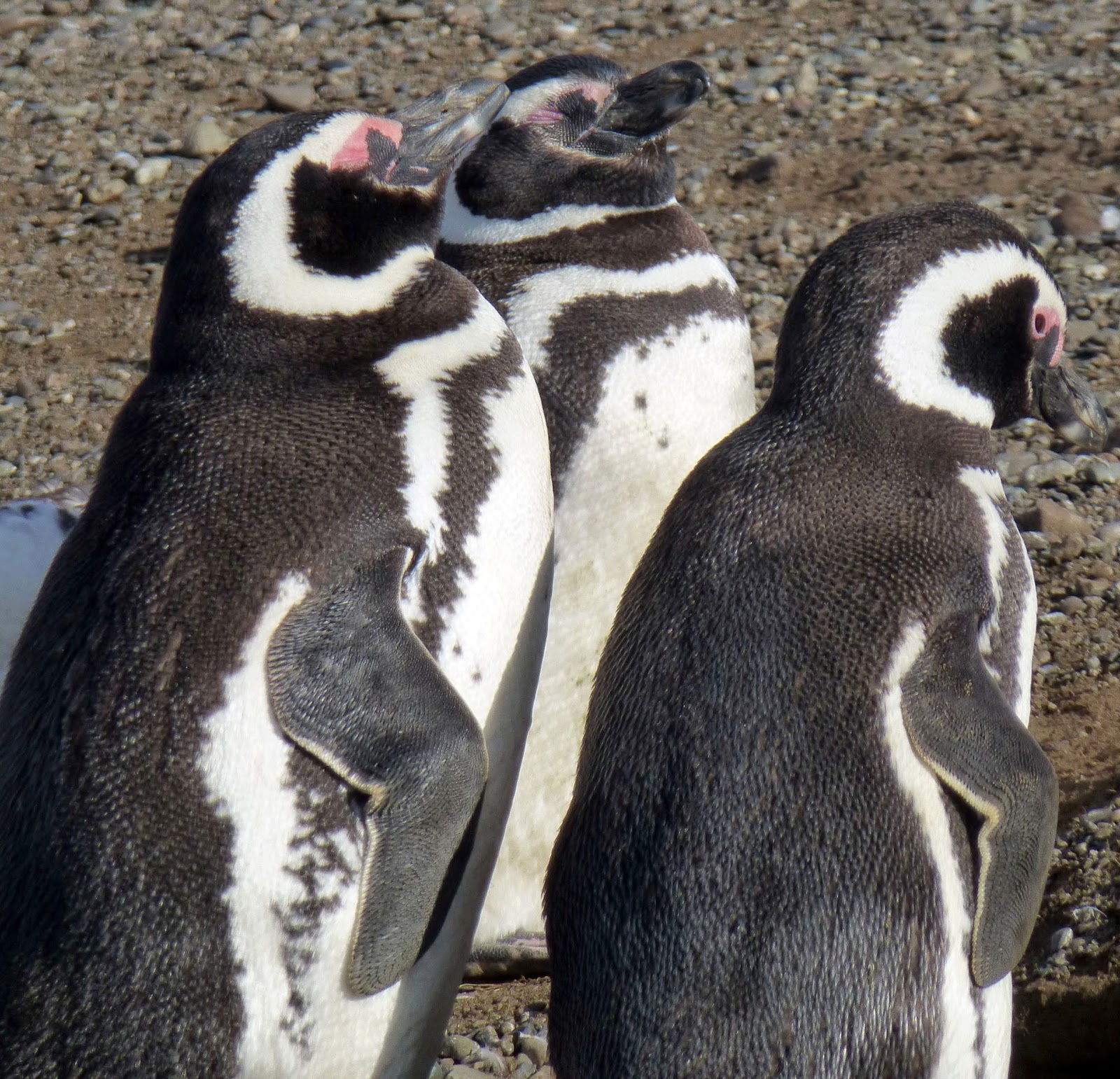 Magellanic penguins can live up to 25 years with as many as 300,000 penguins roosting on this small island.  Male and female look exactly alike, weigh about 11 pounds and mate for life.  Couples are only together six months of the year, parting after babies are born, trained to hunt for food, and sent on their way.  Males and females will go separate directions for the winter, hooking back up the next year – same place, same time- with only the female’s ability to identify her mate’s call bringing them back together. 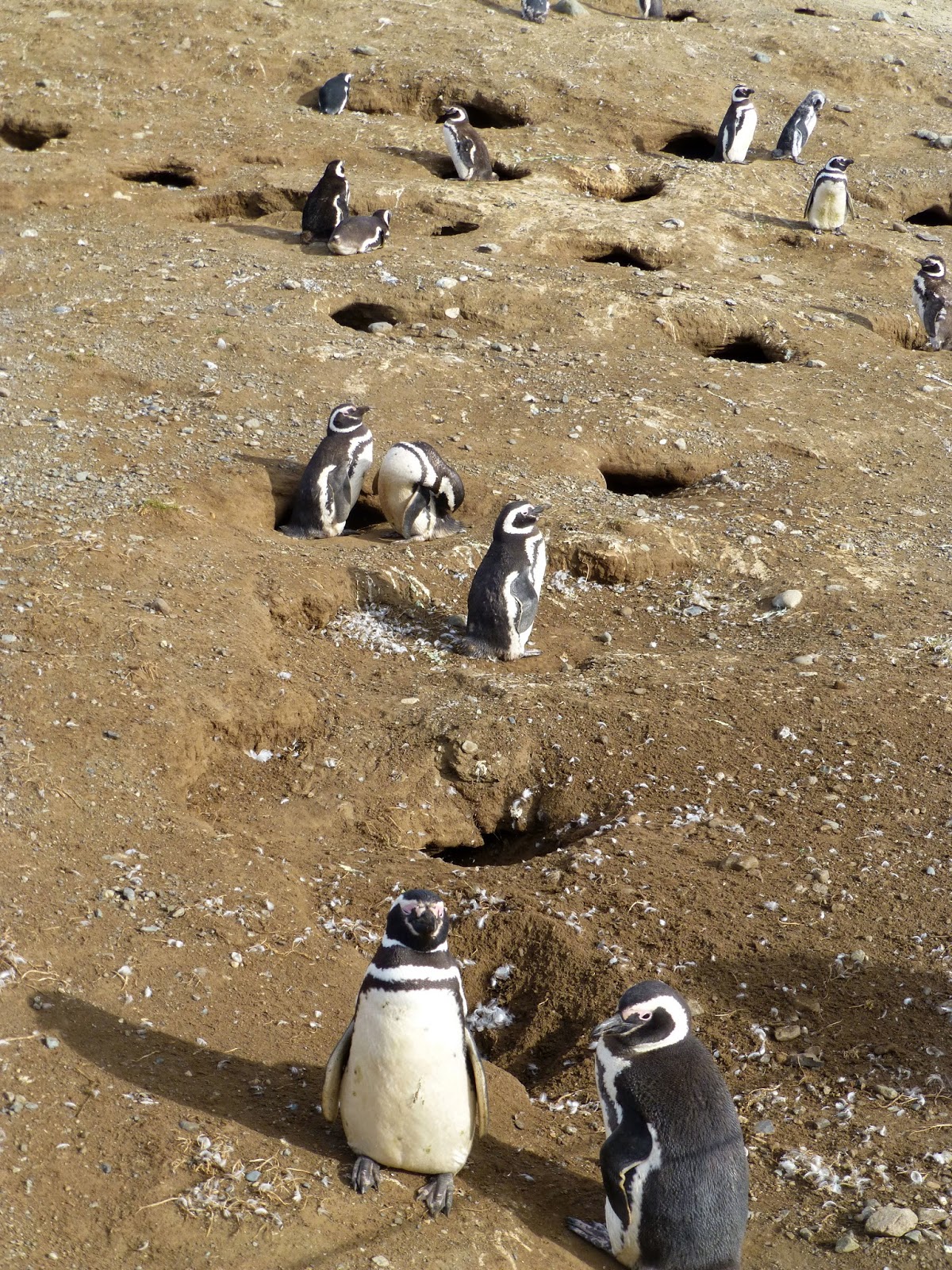 Upon arrival on the island, we had been strictly instructed NOT to stray from the marked path that led from the dock to an old lighthouse.  Looking at the island from the boat, I thought I was gazing at Prairie Dog Town in Lubbock, Texas.  With no vegetation for shade, thousand of penguins stood guard outside the hole that was their home.  They return to the exact same burrow each year where two eggs are produced by the female and hatched by both parents.

By our visit in March, the babies had already been pushed out to sea to find their way up the east coast of Argentina, led by an adolescent.  All adolescents had also been sent packing.  No coddling or overprotective parents here.  Remaining were  adults, easy to identify by the broad black stripes on their chests.  The wider the strip, the older the penguin.  They had to bulk up – gain back weight lost in feeding babies all summer.  No fishing boats were allowed near the island,  but adults still would be out for 2 or 3 days to find food, swimming as far as the Atlantic and Pacific.

We only had an hour on the island and cameras were whirring.  Photographers squatted, lay on the ground, leaned over the ropes marking the paths.  Telephoto lens competed with point and shoot cameras.  The penguins seemed oblivious of us all – similar to a Galapagos Island experience 40 years ago.  Occasionally, a penguin would cross the path on its way to the water, doing that funny waddle until diving in and smoothly swimming away.  It was surprisingly noisy with sea gulls complaining as they were attached by skuas –  large brown birds that like sea gull eggs.  Penguins chimed in with their donkey brays.  And feathers were everywhere as all penguins molt each year.

What our lecture on penguins failed to tell us is the real risk to the colonies because of global warming.  In February of this year, the New York Times ran an article by Harry Fountain detailing the increased heat and rain where penguins mate.  Baby penguins feathers are not waterproof for six weeks and many will die from hypothermia if soaked by rain.  I was shocked at the statistic that 2/3 of the hatchlings don’t survive to leave the nest.  Add this to oil spills, depleted fish supplies from commercial fishing, and unregulated tourism, and our little friends are struggling to adapt fast enough. Fortunately, organizations such as the Wildlife Conservation Society are working to create protected areas with commercial fishing banned.

After an hour, our leader shooed us back down the path to the boat.  It appeared our group had been respectful of the rules regarding the path and didn’t try to get closer than allowed.  But I’m sure the penguins were happy to see us go.  One probably gave the “all clear” sign as the boat pulled out.   Today, that island would be empty as all have moved north for the winter.  We can only hope they’ll be back –  same place, same time next year.