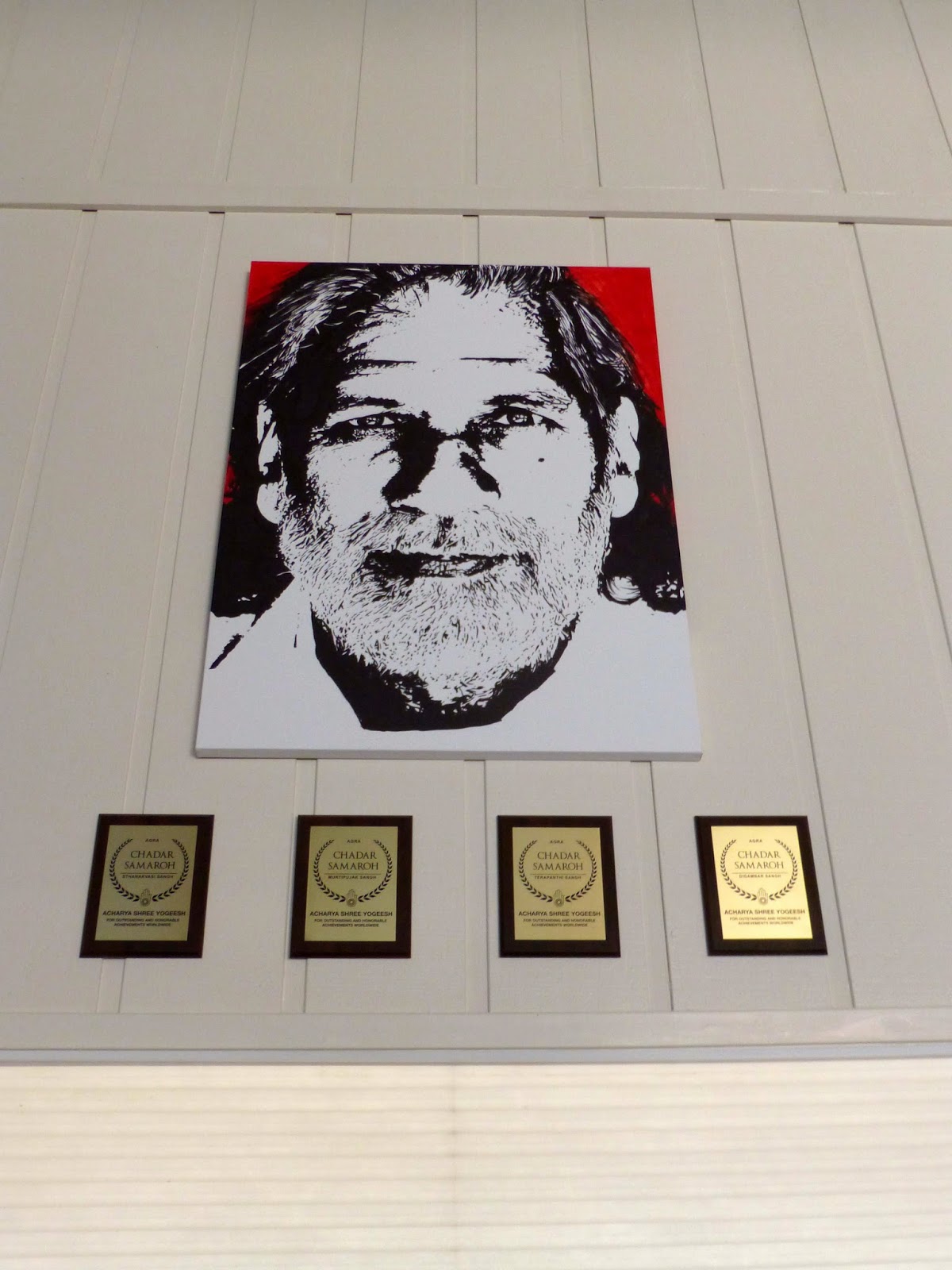 Master Acharya Shree Yogeesh comfortably sat in a cross legged pose on a dais in a corner of the large room.  An ivory wool shawl draped over his white cable knit sweater.  White socks peeked out from his equally light, linen loose-fitting pants.  His smile welcomed all into the room and encouraged us to sit on the floor in front of him as we prepared to interview him.  On the wall were a mantra in an ancient language and a large print of the Master with his awards below.   Behind us were volunteers who work at the Retreat Center.  Were we in India?  Maybe Nepal?  No, the Siddhayatan Hindu-Jain Tirth & Spiritual Retreat  was a short 20 minute drive from Paris on Highway 56, just west of Windom.

I had heard of Siddhayatan from Kelli Ebel, a PJC instructor and friend.  She arranged for a group of Paris yoga students to take a class there, enjoy a vegetarian meal, tour the grounds and visit with Acharya Shree.  The yoga class was led by a fairly recent convert to Yoga practices. Even though Anubhuti , a nun in training, only learned yoga three years ago, her limber body and soft voice easily led us through the flow of positions. Basic vegetarian fare of rice, lentils, potatoes and flame warmed chapatis were served, prepared by the volunteers and those attending the retreat.  Indian sugary sweets capped the meal.

Kelli led us on a tour of the grounds and helped us see the vision that had brought Acharya Shree to Northeast Texas.  It was a warm, winter day with a slight breeze and the Bonham water tower could be seen in the distance. A long ranch style home serves as the center with its great room used for eating and lectures.  In a large horse barn,  stalls have been converted into 20 simple rooms with two single beds and shared baths.  Forty beds had been donated by a Ft. Worth pediatrician.   To accommodate the expected increase in guests, concrete had recently been poured inside a huge hanger to be used as a lecture hall for 300 or more attendees.  A new dining hall was nearing completion while the yoga-meditation building stood nearby.

In India, an acharya is a guide in religious matters or a highly learned man.  Acharya Shree Yogeesh’s name thus reveals his recognition as a living enlightened master.  He became a Jain monk at age 14 and holds a doctorate in Philosophy.  The Windom center is his fourth to serve a community.  He has established a school in India as well as ashrams in India and California and he lectures worldwide.  Acharya Shree assured us they’ve been well received in Texas.  When people find out he’s from India, they all say, “oh, yes, my doctor’s from India.”  He smiles when telling that story.

Acharya Shree’s reply on why he came to Texas at all had some surprises.  He wanted fertile land and Texas is long on that.  “Texas has a lot of freedom,” he says and fewer laws means more freedom and less stress.  Texans are patriotic and volunteer to defend their country.  He recognizes this as important and necessary.  But what is missing here is we don’t follow the principles of non-violence. Even Acharya Shree knows this could be a quixotic adventure but feels strongly if he can bring awareness to one person, he can change the world.

The Windom site was chosen because of its location at the highest point of Fannin County where the wind often blows, a reflection of God’s spirit or Om.  This gives the name of Windom or Wind – Om a completely different meaning.  His center has classes and retreats in such subjects as Yoga, Meditation, PTSD help, Silence, Stress Relief and Fasting and includes a children’s retreat.  Acharya emphasized his Hinduism is not a religion but a way of life, pulling yourself away from the violence in our culture onto a peaceful path.  Any follower, regardless of religion, can benefit from this move.  Visitors come from all over the U.S. and the world. 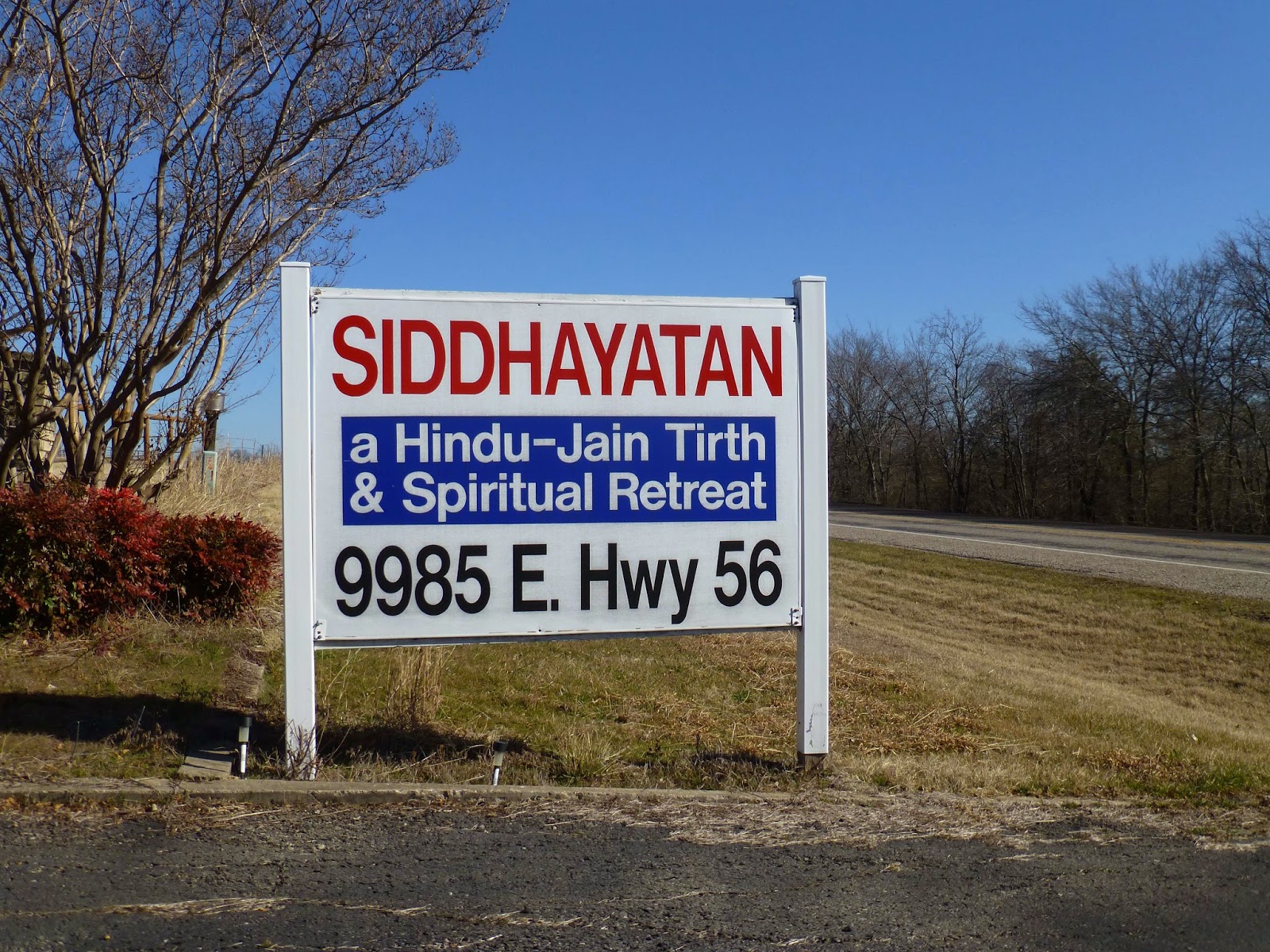 What makes this location unique is the plan to create North American’s only Hindu Tirth where pilgrims can experience a long walk (journey), be reminded of spiritual values (symbolism), and be in  a place of spiritual and healing vibrations.  According to the Hindustan Times, “miniature versions of famous tirthas of India will be constructed, thus giving visitors not only a chance to visit one tirth, but the opportunity to visit ten tirths at one time. Each tirtha will occupy at least 4 acres of land containing original soil and water from India’s famous tirthas.”
For now, the tirth is a dream but Acharya Shree Yogeesh believes our lives are a turtle race.  With slow, steady, and thoughtful steps, all can be accomplished.   Anyone wanting to make that first step toward a less stressful  life should consider Siddhayatan.  Only its name is intimidating.

One Response to “How did Siddhayatan Hindu-Jain Tirth & Spiritual Retreat arrive in Windom, Fannin County, Texas?”