I spent my 16th birthday on an unseasonably cold evening at the revolving restaurant in Seattle’s Space Needle.  Four years earlier, The World Fair of 1962 had spawned this intergalactic structure based on a napkin doodle made by Eddie Carlson while visiting a restaurant atop a TV tower in Stuttgart, Germany.  The idea of a revolving restaurant came from the project’s architect, John Ridley, making it the second such moving eatery in the world.  Construction began a mere one year before the fair opened – indicative of a different era of contract deadlines.  Despite the last elevator part arriving one day before, the Space Needle opened on time.

President Kennedy signaled the start of the Fair by tapping a telegraph  key that triggered a radio telescope in Maine, which picked up an impulse from a star 10,000 light years away. This impulse was directed towards the fairgrounds to start the festivities.  The future had arrived – thus the theme of Century 21.

Forty seven years later, I again rode the Space Needle’s 10 m.p.h. elevator to the observation deck and joined a very international crowd absorbing the 360 degree view.  Eddie Carlson would have been shocked at the twelve dollars needed to buy a ticket as he couldn’t believe people would willingly pay to ride an elevator in the German tower.  It’s well worth the price just to get oriented in Seattle where the Pacific Ocean meets the Olympic and Cascade mountains with lakes interspersed.  Ferries laden with cars trundled across Puget Sound,  cruise ships lay below awaiting late afternoon departures to Alaska, traffic was surprisingly fluid on Interstate 5 through downtown, and snow covered Mt .Rainier could be made out in the haze. 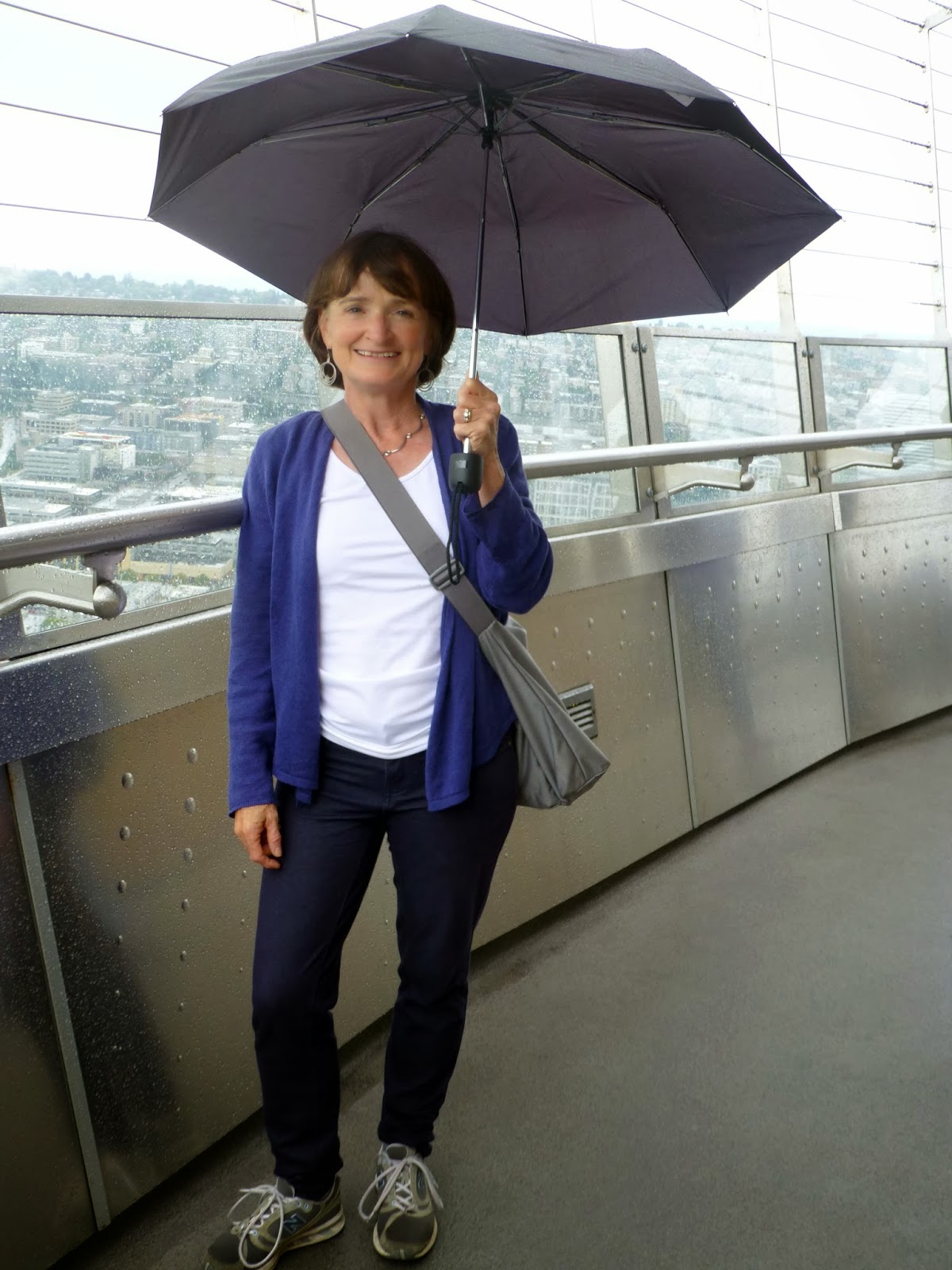 Little of the original fair remains.   Seattle was smart to maintain the Needle and the Monorail as they are heavily used by tourists.  Next door is the Pacific Science Center, former United States Science Pavilion, which started the now common trend of a museum established for science purposes.  Dallas’ newly opened Perot Science Museum is a direct descendant.   On a previous visit, we were highly entertained by getting to pose  as a rock band at the nearby Experience Music Project Seattle, founded by Paul Allen, co-founder of Microsoft.  As I hammered the keyboard, my husband played the guitar and we sang “Wild Thing” before a video camera.   No scouts were impressed.

World Fairs continue today although the name has morphed through World Expositions into World Expos.  They began in Paris, France in 1884, used first to promote industrial inventions and products.  The 1893 Chicago and 1904 St. Louis fairs were of this genre.  Later emphasis was place on cultural exchanges as well as science and Seattle fit in this category.  Today, countries use the expos to showcase their accomplishments and demonstrate the ability to organize such an event as well as  attract visitors.  The next big expositions are set for 2017 in Astana Kazakhstan and Dubai in 2020.  Remnants of world fairs are found all over the world – Paris’ Eiffel Tower, St. Louis Art Museum (originally Palace of Fine Arts), Japanese Tea Garden in San Francisco, Museum of Science and Industry in Chicago, the Atomium in Brussels, and the Unisphere in Queens, New York.  Many of these icons are dated but still hold their charm.

The Space Needle is beloved by Seattle residents and has been protected from encroachment of tall buildings, making it visible for miles around.  It’s a wonderful landmark.  We could easily spot it from the ferry docks  and as we sat on the old Gas Works Park, north of downtown Seattle.  At the Volunteer Park Conservatory,  artist Isamu Noguchi placed the view of the needle in the opening of his Black Sun outdoor sculpture.  The needle definitely deserves more than its  #35 ranking on Travel Advisor’s places to see in Seattle.

Other than being a bit smaller than I remembered, the Space Needle provided  a step back in time.  I discovered I was in good company in 1966 when  11-year-old Bill Gates, now Microsoft chairman and co-founder, won a dinner at the Space Needle restaurant offered by his pastor. Gates had to memorize chapters 5, 6 and 7 of the Gospel of Matthew, better known as the Sermon on the Mount, and he recited it flawlessly.  He probably wasn’t there the night of my birthday but  I got a great meal and a lovely watch.  I later forgot my watch in a bathroom in Bolivia but I have never forgotten the Space Needle birthday experience and it’s still worth the cost of the elevator ride.