I don’t know when I first made the comment but it became the parting words of each phone call  as we planned our trip to Israel – “Let’s lunch in Nazareth.”   We wanted to drive from Tel Aviv to the Galilean Sea and stop at the Church of the Annunciation. After looking at a map of this very small country,  it appeared the drive would take only an hour (61 miles) making Nazareth the perfect spot  for Sunday  lunch.

The four lane road was very good as was the signage in English, Hebrew and Arabic and we soon exited into the largest Arab city in Israel.  Next door, Upper Nazareth is a new suburb with a high percentage Jewish population thanks to a large influx of Russian immigrants.  But the old city of Nazareth is about 70%  Muslim and 30% Christian.  Since most  of the Christians are Arabs, the area is a social scientist’s dream lab to study inter-faith relations.

Sunday is the day of rest for Christians and Moslems in Nazareth and we easily found a parking spot along the compound containing St. Joseph’s Church and Church of the Annunciation.  Inside, Christian tour groups took turns descending to the spot in the lower church where it is believed Mary received the annunciation of her pregnancy from the angel Gabriel. Some knelt and prayed.  Others said the Hail Mary quietly. 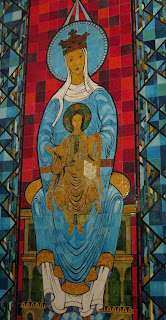 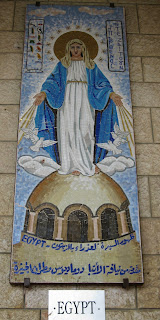 Both inside the Church of the Annunciation and its courtyard are vivid stain glass pieces from countries around the world.  Artists created their vision of Mary and the annunciation in the style and tradition of each country.  The images and colors varied from high Renaissance to folk art to starkly modern.  Outside, we heard a tour group from Slovakia singing a dirge like homage in front of their outside Mary piece.  In contrast, when we ascended to the empty upper sanctuary,  church bells began ringing – not to any tune but simply in apparent celebration.  All we could figure was a ten minute joyful acknowledgment of the arrival of 12 noon.

Surrounding the churches were  narrow streets of Arab owned stores, closed for Sunday.  While disappointed to miss the bustling market,  we found a few Christian stores open.  Inside one were two beautiful Arab Mazzadi sisters, whose wares included hand carved olive wood figures and many Christian pieces and jewelry.  They said we had just caught them as they were to close soon for lunch.  When asked where to dine, they suggested the YMCA of Nazareth.

The YMCA has a long presence in the Holy Lands, dating back to the late 1880s.  After 1948,  YMCA programs expanded into Eastern Jerusalem to cater to Muslims and Christians.  In 1964, Nazareth opened its YMCA with the organization’s  motto engraved on the outside wall , “That youth may grow in wisdom,  stature, and favor with God and man.”  Members of the Israeli Y organization include Muslims, Christians and Jews and its activities provide one of the few inter-faith opportunities in this divided country.

After being assured of its good food, we drove to the nearby Y.  Inside,  a tour group was just departing, leaving only a few tables occupied.  But soon the

Arab church crowd began arriving.    Families with children, dressed in their Sunday best, filled tables.  Much visiting took place across long established relationships.  It was all very familiar – like a Paris restaurant on Sundays at noon – only we were in an Arab city in the heart of Israel.


We had loved the food in Israel and this restaurant was no exception.  It served the wonderful small plates that included homemade humus, corn salad, marinated carrots and eggplant, green salad, colorful peppers, and more.  A single order of 14 small plates with side chicken kabobs were enough for the three of us to have a healthy and filling lunch.  As we ate, the two sisters from the store joined their families at the restaurant.  Since their brother was the manager, they were obvious regulars.

The recently defeated, long-time Christian mayor of Nazareth, Ramiz Jarai  called his town the City of Peace.  Maybe that’s why Texas A&M  just announced a “peace university” campus to be constructed in Nazareth – a place where President John Sharp hopes “different people from all over Israel would not only study to get a degree but would become more familiar with each other and foster understanding”.  The YMCA has been working on that for many years.  It was an unexpected luncheon site but it gave us as much hope as any place we visited in Israel that three religions can live side by side.

One Response to “SUNDAY LUNCH AT THE YMCA IN NAZARETH”