When Bari (Benny) Mehmeti and Neire (Nada) Mehmeti bought Cappizzi’s Restaurant in 2001, I thought it interesting that we had an Albanian family in Paris who owned an Italian restaurant.  I didn’t realize this was happening all across the country.  Albania has a long history with Italy since they are across the Adriatic Sea from each other.  Mussolini annexed Albania to Italy in 1939 but had to return it in 1945.  Two other countries have large populations of ethnic Albanians – 92% of Kosovo and about 25% of Macedonia.  Since many ethnic Albanians spent time in refuge camps in Italy before immigrating to the U.S., they picked up the food and even the language.

Benny’s history certainly bore out this scenario.  By ethnicity an Albanian, he grew up in what was then Yugoslavia but is today Macedonia. Benny always liked America.   When a cousin returned to visit from the USA with tales of earning $100/week, Benny decided to escape to Italy to a refugee camp.  From there he made his way to Chicago where he joined his brother and uncle and began his now 44 year career in the restaurant business.  He started as a dishwasher at a Greek restaurant, progressed to busboy and then bartender.  When enough money was saved, he bought a diner with his brother.  Thus began 20 years of buying and selling restaurants, living in Dallas and Chicago, and finally in 2001 purchasing Cappizzi’s in Paris.

The original plan was to stay in Paris for five years but the Mehmetis  were so well received they stayed.  The restaurant quickly attracted a following thanks to Nada’s incredible smile and warm nature.  She never forgets a face and is always offering a helping hand.  They built upon the business that had been started by the two previous Albanian owners. Benny began to coach soccer, a sport he played wherever he lived.  He was so successful that their son, Ilme, is now the captain of the PJC soccer team.  Benny is a familiar presence at Ilme’s games, decked out in one of his 34 hats.

I decided to talk to other Italian restaurants in the area to determine if all were owned by ethnic Albanians. In Clarksville, Alek and Aurora Lleshi own the downtown Italian Bistro, rated the number one restaurant in that town  on Trip Advisor and featured in Texas Highways magazine.    Alek’s family has a strong connection with Italy as his parents lived in Florence but they are native Albanians.   Alek is eager to make you feel welcome. His speech is filled with appreciation for his family and how well  received they’ve been in Clarksville.  The restaurant has a loyal following who enjoy the food and Alek’s attention. 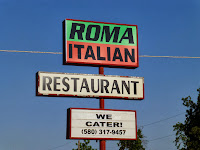 Roma Restaurant in Hugo just opened this year and is already popular.  It is owned by Beoijna Dervishi and husband, Luigi Dervishi, and by Luigi’s brother, Giovanni (Johnny) Dervishi, all ethnic Albanians.    Johnny is the youngest of seven children and the ebullient talker of the family.  He and his brother immigrated from Kosovo to New York and followed the now familiar pattern of working in an Italian restaurant there.  Johnny would make 300 to 400 pizzas a day.  Using family connections (Mrs. Beoijna Dervishi is Benny Mehmeti’s niece), they bought a restaurant building in Hugo and set up an Italian shop.  Members of their extended family own Roma restaurants in Durant, Idabel, and DeQueen, Arkansas.  Johnny described this area as if it were a franchise territory.

What I enjoyed in meeting these families was the consistency of their respect for the United States.  Two of them described their life here as “being reborn”.  All thanked God for their families and opportunities.  “God Bless America”  said Johnny Dervishi many times.  And I say, “ God Bless Albanians”  for their enthusiasm and contributions to America.