Monuments and memorials can  commemorate heroes  such as Washington and Lincoln  or acknowledge sacrifice of Vietnam’s soldiers.  They are also useful to publicly display regret at a past event.  In this mea culpa category, Berlin, Germany has finally owned up.

It took 60  years for Berlin to build a memorial to the six  millions  Jews killed under Hitler’s regime.  The delay had its reasons.  Facts were painful to face.   Many Germans were ignorant of the holocaust and placed blame on their leaders.  Berlin was divided. Germany was busy rebuilding a broken country.  Only after the two Germanys reunited in 1990, worked out the many details and finances of reunification, and moved the capital back to Berlin  was the country ready to face its past here.  And,  as with most memorials, controversy surrounded the attempts to display the compromised past.

Every decision for the Memorial to the Murdered Jews of Europe  was debated.  Location (Berlin or nearer a concentration camp)  and design (12 artists submitted ideas) had to be approved.   Who was being remembered – just Jews or others murdered?  And an unexpected controversy appeared when the IG Pharmacy Company provided anti-graffiti paint for the blocks despite the company’s association with producing the nerve gas used in concentration camps.  These agitations disappeared once the memorial was completed. 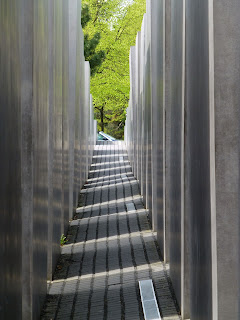 No names are engraved on the 2711 solid concrete stele and each is a unique size.  The arrangement of the blocks yields strong images –  a graveyard, cattle cars, camp barracks.  From the outside, it is not obvious how deep the blocks descend, symbolic of the  public’s ignorance of the Jews’ plight.  From the inside,  visitors feel the hopelessness of internment in a camp.  Yet children dashed about, playing hide and go seek as teenagers huddled here and there – the classic image of life moving on which it has.  After World War II, only 5,000 Jews remained in Berlin out of 180,000.  Today that number has grown to 40,000 made up mostly of Russian Jews who have been welcomed by the city.

To acknowledge other groups targeted by the Nazi regime, Berlin built more memorials.  Gays had to also wait until 2008 for  their own monument.  A slit window in a concrete enclosed structure allows visitors to watch a video of a gay couple kissing.  Its controversy centered on whether to include lesbians as most of the discrimination occurred against male couples.  As a compromise, the film alternates every two years between female and male couples.

At the Gypsy memorial to the Roma and Sinti victims, just opened in 2012,  traditional Roma music plays.  Designed by Israeli artist Dani Karavan, the still water pool features a triangular stone pillar, symbolic of the triangle badge required to be worn by this population.  A new flower is placed in the center daily.

On May 10, 1933, 20,000 books were burned at the Bebelplatz to rid the pure Aryan population of ‘dangerous’ authors such as Ernest Hemingway and Jack London.   Today, a window on the floor of the plaza looks down into a room lined with empty bookshelves.  This is known as a voided monument – one that marks what is lost.  Heinrich Heine’s prescient quote from 1820 lays nearby , “This is only a prelude – when one burns books, one burns people.”  On the day of our visit, the local library had appropriately turned the plaza into an outdoor reading space, complete with reclining chairs, bean bags and lots of books.

A final memorial was the most moving.  In an old artillery storage building, the Tomb of the Unknown Soldier and Concentration Camp Victim lies beneath a single Pieta like figure.  Above her, light pours in through an open skylight.  When it rains on the statue, she appears to be crying.

The subject of memorials in Berlin generates strong feelings among those who feel it necessary to acknowledge culpability and those who feel it’s time to move on.  Complaints of too much hand-wringing are becoming more common.  As our guide said, “Memory is tricky in Berlin”.   With the Nazi and Communist histories, the argument will always be what to remember and what to forget.  Monuments and memorials make it much harder to forget.