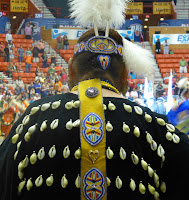 Because of the Indian Removal Act of 1837 , Native American tribes were forcibly moved to Oklahoma, resulting in 39 of these Federally Recognized groups having Tribal Headquarters in here.   Oklahoma has the most Native Americans in the U.S., more languages than Europe, and no reservation system that is common in the West. There are sovereign nations with their own police but the population is mainstreamed into Oklahoma society.  I have long wondered where the Native Americans hung out in Oklahoma and I found many at the 27 year old Red Earth Festival, a multi-tribal pow wow.

The Cox Convention Center in downtown Oklahoma City is a surprising choice for a Pow Wow location but the advantage of indoor air conditioning is notable.   The festival is unique in its combination of a juried Art Show with dancing and drumming. Most artists traveled from New Mexico and Arizona but a healthy number of emerging Oklahoman artists participated.   Chase Earles is part of a Caddo Rivivalist movement, learning the ceramic crosshatching thin coil method and pit firing from an elder and by trial and error.  Mary Alston, a Cherokee from Woodward, Oklahoma uses traditional honeysuckle and buck rush for Cherokee basketry.  And Oklahoma City Laketa Ann Pratt, a Cheyenne Arapaho Sioux Creek, works with soft buckskin to create her dolls.

While exploring the  arts and craft section, I met three tour agents from Germany who were thrilled to be there.  As children, they all read books by Karl May, a German author who wrote a series of books about Chief Winnetou,  fictional chief of the Apache Tribe.  One agent said he would receive a new book every Christmas and birthday and he was fascinated by The Old West.   Because of these books, many Germans still come to the Southwest on their American vacation and the Oklahoma City Tourist Office promotes its destination throughout Germany. 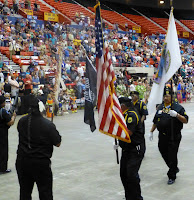 A grand parade each morning brought several hundred dancers into the arena, led by an elderly honor guard of  veterans, the highest honor of a warrior society.  This year, members of the Seminole tribe carried a traditional staff with eagle feathers in front followed by the American and Oklahoma flags.  Singers sang in their native tongue to a deliberate drum beat.   Women’s dresses swayed easily to the simple steps.  Children followed in native regalia.  Young male dancers swirled and jumped.  All stood in a circle as the Native American Flag Song was sung honoring the American flag.

The dancing soon began, with four contests each for men and women.  All hoped to win a cash prize up to $1000 for first place.  A special family prize of a quarter horse was  donated by the R. G. Harris family – one of the emcees and a former fancy dancer –  and given to the best fancy dancer. Eric Oesch, director of the Red Earth Festival, admitted their prize money can’t compete with those offered by pow-wows sponsored by tribal run casinos but it was enough to draw a good crowd.  Most were dancing for the tradition even though their native garb easily cost hundreds of dollars.

For the men, the Fancy Dance is based on a War dance and requires strength, The Traditional Dance tells a story of bravery in the hunt, Grass Dance celebrates the importance in grass in a warrior’s life, and the southern traditional Straight Dance, also known as the old man’s dance, requires a Golden Eagle tail feather.  Women can choose the Buckskin Dance, originally only open  to princesses and women in leadership roles,  Fancy Shawl as the newest,  Jingle Dance with its story of a child healed, and Cloth Dance distinguished by ribbons imitating grass blowing.  Feather fans, jingles, and stunning shawls accompany the women.  The traditions are still being past down in families with 10 to 12 years old boys and girls participating as well as one 72 year old man who had been dancing since he was six. 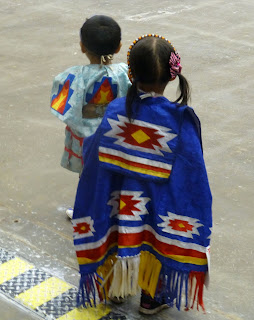 Past and present day life played out in the civic center as a painted warrior pushed a baby stroller,  a father used a Q-tip to paint his child’s face, and at the food court, a young Fancy Dancer was more interested in finding pizza than an Indian Taco. A man from Dallas seated next to me asked, “Is this your first pow-wow?”  He had just begun exploring his Cherokee/Choctaw heritage and enjoyed attending pow-wows on the week-end.  There are many to choose from in all 50 states.    Four other pow-wows were advertised on the Red Earth week-end, including one in Texas.  I replied, “yes, it’s my first pow-wow but it won’t be my last.”