It’s no secret that your children’s relocations can take you places you never expected to explore.  Olympia, Washington is one of those sites for us.   As the capital of the State of Washington, the city has more power than its size would suggest.   With only 47,000 inhabitants (less than twice the population of Paris), Olympia has a small but vibrant downtown on the waters edge.   Suburbs absorb most of the rest of  Thurston County’s 250,000 population.  Only the capitol building and grounds really set this town apart.    On a rainy Sunday afternoon, I checked out the last of the great state capitols to be built.

The elevated site looks out over downtown Olympia.  All of Thomas Jefferson’s criteria for a government on a hill are met in this Washington rather than Washington, D.C. In 1905, the state dedicated its money from harvested timber on state lands to the building and maintenance of a new capitol.  Their timing was perfect.  The building was completed in 1928 – just one year before the Great Depression hit.  While the governor and others derided the expense, 7 million dollars bought one heck of a building.

There’s nothing native about the architecture. It’s  pure Roman-Greco – the same style copied by many state buildings from our nation’s capitol in Washington, D.C.  Filled with irreplaceable Alaskan white marble floors and walls, brass firepots, and  a five story cupola, this is as close to the cathedrals of Europe as can be found around here.  The one-ton brass doors tell stories with their bas relief – the states’ timber that made the state what it is today, early 1850’s homesteading, waterfalls indicating the state with the most hydro-electric power and the sheep industry that once competed with Australia.  They display a different kind of paradise than Ghibertti’s in Florence. 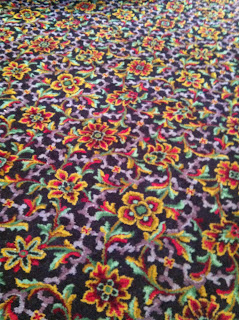 The capitol building  has some Texas bragging kind of qualities –  largest single loom carpet in the world, biggest Tiffany chandelier ever made (could hold a Volkswagon beetle according to our guide), largest collection of Tiffany lights and the highest masonry dome in the United States – i.e. one with stone on top.  Of course, Texas’ dome is taller but of  different material.

The information sheets came in Spanish, German, French, Japanese, Chinese, Vietnamese, and Russian – indicative of the state’s Pacific location and sources of their immigrant population.  And, because it sits on a whole capillary set of geological faults, the structure was built to withstand earthquakes.  Before the 2001 earthquake, the columns were not even attached and no mortar held the stone together, only gravity.  A $100 million renovation after that earthquake has now secured those.

In 1976, on our nation’s 200th birthday, each state chose items to place in their capitols.  Washington’s time capsule is buried in the capitol’s entrance and contains seeds from their native plants, then current magazines and newspapers, student compositions on imagined life in 2076 and, no surprise here, cans of salmon and beer.

After years in Texas, it felt strange to be in a legislature where Democrats dominate.  Despite two-thirds of the land being in Western Washington, it is no longer a rural state.  Seattle’s King County guides the votes.  One legislator remarked that he could pass anything with the support of a majority of the voters seen from the Seattle space needle.  Yet, a more laid back atmosphere prevails.  Ninety percent of the votes are unanimous. The Senate still votes by a roll call of individual senators rather than electronically.  There were no metal detectors to suffer upon entering the building.  And the legislature meets only 105 days this year. 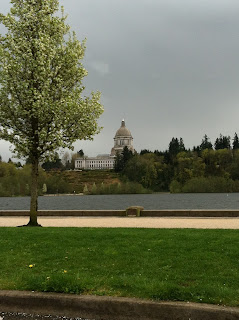 I’ve always thought the view from the Texas Capitol in Austin, down Congress Avenue to Town Lake was as good as it got.  But walking out of the Washington Capitol with landscaped grounds, spring fruit trees in full bloom, Capitol Lake to the west, Puget Sound to the north, mountains circling and the Temple of Justice below gave me pause.   If the sun would just shine more, it would be tempting indeed.