Our son was to marry in Guatemala at a beautiful hotel on the shores of Lake Atitlan.  Friends thought it a destination wedding but it wasn’t.   Such events imply ceremonies on the beach at sunset with no connection to the locale.  For ours, the bride’s roots in Guatemala ran deep and the wedding was an impressive combination of cultures.

Walker met Dorcas Cristal  and her family as a Peace Corps Volunteer when he worked in Chimazat, a small indigenous Maya village filled with strawberry farmers.  Her father came from a respected farming family that valued education.  Efrain finished high school in accounting and worked for two NGOs (non-profits) until taking a position with Honda in Guatemala City.  He had to commute on week-ends but used his earnings to buy land.  Her mother, Irma, was also descended from a large farming family.  She met Efrain in an evangelical church choir and married him when she was 18 and he 27.

They had five children – four girls and a boy.   Tragically, their son, Avilio, died at age 16 from leukemia, an event that most affected Efrain,  softening his traditional strict nature.

Their daughters’ careers  directly reflect the changing times in Guatemala. Irma didn’t want her daughters to suffer at the hands of macho men and she taught them to be independent.  She was the first woman in their village to drive a car and she made sure her girls could, too.

As the oldest, Irmita was a talented singer and musician and typical focused firstborn.  She moved to Guatemala City to learn English and to get a masters degree in psychology.  She now works for Tierra Nueva, an NGO that helps abused women.

Alba was strong, the tomboy of the family, and even knew how to work on cars.  Men didn’t know what to think of her.  With her family’s help, she started an egg business and later married Raul who had a poultry business – a nice combination that has allowed the family to prosper.

As a child, Diana loved to watch TV and was scared of even a mosquito.  But when a friend suggested applying for to the military school of Escuela Politechnica de Guatemala, she jumped in, becoming the first indigenous female tograduate from this prestigious institution.  She’s become the toughest of them all as she begins her eight years of military service.

Dorcas was the youngest and  educated more by her mother and sisters than in school.  They made sure she read early and encouraged her to get a college degree.  But Guatemala’s universities require students to begin anew if they change majors and  Dorcas wasn’t sure of a career path.  So, she became the first of the family to live abroad when she moved to Long Island, New York to be an au pair for a family with three boys.  Her arrival in the United States gave our son an  opportunity to pursue her which he did. 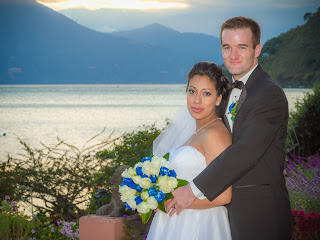 As the guests arrived for the wedding, it was easy to discern their nationalities.  The Guatemalan women wore traditional embroidered blouses called guipiles and wrap around skirts, many with cotton sweaters added for warmth.  The Maya men were in western suits with the bride’s father looking sharp in a tuxedo.  Young adults attending were indistinguishable from each other – the international youth culture being monochromatic in style.

In the wedding party, Dorcas’ attendants wore the traditional dress as did her mother but Dorcas had chosen a simple white gown from David’s Bridal in the States. Groomsmen brought tuxedos with them.

Although the service was primarily in Spanish,  guests were greeted in Spanish and English, readings were in both languages and my husband and I gave a bilingual despedirse or good by at the end.   The mingling of cultures was so interesting, many guests at the hotel watched the ceremony from above.

At the reception, tables were divided naturally by culture and language but on the dance floor.. ….  music united.  Sixties hits kicked off the dancing but soon a Latin beat entered followed by more current songs. The floor never emptied and all ages and dress styles mingled and moved to the beat. Even behind the buffet line, the staff could be seen tapping their feet.  What a night.

It is a tribute to the Cristals, a family proud of its Guatemalan traditions and history, that they raised four daughters in a developing country to be independent and confident.  Their success gives hope to all women of Guatemala.  And, of course, we were lucky enough to get one of those girls as our daughter-in-law.

2 Responses to “Marrying into the Amazing Cristal Family”