As recently as the 1990 census, Paris could brag of being larger than McKinney by 4,000 residents.  Today, a mere 23 years later, McKinney’s population has leapt ahead to over 141,000 – more than five times that of Paris.  Along the Highway 75 corridor, national chain box stores have filled in any lingering farmland and franchise restaurants followed the population surge.  Yet, downtown McKinney retains local charm while offering big city restaurants and stores.

The map of the historic square area resembles that of a large shopping mall, except everything is on one level.  Listed are 20 restaurants, 11 apparel shops, 12 health and beauty salons and studios, one hotel, and 34 specialty stores such as the Lone Star Wine Cellar, The Cake Stand, Cadence Cyclery, Walls of Clay, Kitchenware on the Square, and a surprisingly well stocked skip shop.

Doug and Lynda’s Ski Shop began the move to central McKinney in the 1970’s. Back then, the square hosted primarily antique stores and the few elderly visitors arrived by bus from nearby assisted living homes, according to a longtime employee.  The shop is now in its second generation of family owners and continues to surprise tourists with its low costs and large selection of ski equipment,  coats, pants, hats, sunglasses, and all necessary protective gear.  Across the street, four store fronts were being restored for as many new restaurants.

While I enjoyed browsing the unusual women’s stores such as Orison’s western wear that proudly claimed “WE DRESS TEXAS”, it was the side street establishments that held the surprises. A sidewalk placard of a rabbit in a hat pointed  north off the square for a free magic demonstration at the Main Street Magic & Fun Company, one of only five magic stores in the whole state of Texas.  The owners have been very happy with the move to downtown McKinney, noting its relatively inexpensive cost.  I watched a five year old pronounce “hocus pocus” as the magician’s coin mysteriously disappeared.  It’s no wonder they often host children’s birthday parties. 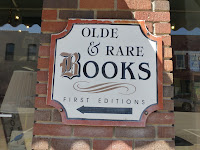 Next door was another hidden gem – a bookstore specializing in old and rare books and especially first editions.  It, obviously, has much more as the books in the front window ranged from a Stephen King novel to one on musical instruments through the ages.  Take your time in this one.

Thanks to extended sidewalks, restaurants on the square spill outside with a European flare complete with rounded tables, white tablecloths and umbrellas. Italian gelato is available at Peciugo’s as are British food pub at Churchill’s and Spanish tapas at Malaga’s.  Just off the square is Gregory’s Bistro offering food of the chef’s Bretagne region of France which included my perfectly cooked Diver sea scallops with lemon vinaigrette. And for those who are less adventuresome, don’t worry.  Rick’s Chophouse boasts of “Texas Cuisine With the Comfort of the South.”

I was impressed with the clever decisions encouraged by the city on uses of old spaces.  After a new courthouse was built south of downtown, the historic 1927 courthouse became the McKinney Performing Arts Center.  The old district courtroom was transformed into a large, comfortable theater venue with nice balcony seating that can even be used for weddings.   Elsewhere on the square, an old movie theater is now a small, indoor  shopping mall.  And, just outside the downtown area, an old flour mill has become the newest wedding setting. 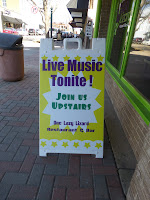 While anytime is a good time to visit downtown McKinney, you can enhance your visit by attending one of the many events scheduled through the year as listed on their Main Street website.  I also discovered this blog by Beth, a local resident who wants to keep all apprised of what is new in her hood –
Downtown McKinney Blog

After only a few hours exploring downtown and the nearby Chestnut Square filled with historic homes, it was easy to understand why McKinney was selected as the second best place to live in the United States by Money Magazine in 2012.  I don’t know about living there but it’s certainly worth a visit.