“World To End on December 21, 2012”  should be a headline reserved for the National Enquirer at check-out stands in your favorite grocery store but this story has been covered by serious news outlets.  The excitement comes from the accurate Maya Calendar begun over 5,000 years ago and still in use by the Maya people of Guatemala and Mexico.

As the end of this 5 millennial  calendar cycle approached, much attention has been given to the event. Yet, it’s really just a reset of the calendar for another 5,126 years.  There will be celebrating on December 21st as a rebirth of their civilization but no preparations for the apocalypse.

A byproduct of the spotlight on the Maya Calendar has been the “outing” of their ancient Fire Ceremony.  When Spaniards arrived in Central America over 500 years ago, Maya temples were destroyed and all residents ordered to convert to Catholicism.  Not surprisingly, natives took their religion underground.  Because of the recent interest in the Maya Calendar, the indigenous of Guatemala have had many inquiries and have begun to more openly share their beliefs and ceremonies.  We were fortunate to experience their powerful Fire Ceremony with Calista Gabriel, one of the 3,000 mostly female Shamans, or guides, in Guatemala.

Calista was a political refugee in the United States during the Guatemalan internal war in the 1980s.  She returned and is part of the Maya artist movement.  With three university degrees and three languages,  the diminutive native was knowledgeable and self-assured.

From her we learned the Sacred Fire is over 5000 years old.  Each is different.  Some burn large.  Others  burn out.  With the Mayas, a fire may last three or four hours and include  much crying, laughing, and dancing.  Petitions are very personal such as  “My husband won’t give me enough money.”

On our hotel’s enclosed parking lot, we sat in a  circle of 8 chairs surrounding a large, low, round ceramic pot .  Calista started the wood fire and lit a rue branch.  “Don’t be scared of smoke” .  She asked us to use fire as medicine.  “Talk to fire.” “Connect with it.  Tell it your name.”   As she waved the smoking branch around each of us, we introduced ourselves and verbalized what we hoped to receive from the ceremony. One wanted direction and healing for his family, another cure for a son, another wisdom,  and one for forgiveness for the overuse of earth’s resources.

As she swept our bodies, Calista noted we were part of the creation but have become artificial.  In villages, there is more connection among neighborhoods.  In the city, we are as she said “more weak” because of the disconnect.  As the plant crossed our heads, she talked of cleaning our “corona”, our antenna, and purifying our energies.  A sprinkling of flower water on us was the final preparation for the calling of the four directions.

Candles are integral to this experience and Calista pulled them out of her backpack.  Red is for East and the color of blood, black for the west and earth, white is from the north and represents air, yellow the south and color of skin.  Blue is in the center of the cosmic cross and stands in for water and sky while green does so for plants and mother earth.  As our leader explained the meanings of each candle in her three languages of Kaqchikel, Spanish and English,  we individually placed ours in the fire with a prayer or observation.  The most  moving was the last, a lard candle made from animal fat standing in for our ancestors.  We all had special prayers for those who came before us.

At the end, Calista made the sign of the Maya cross, different than that of our Catholic brethren, indicating the balance of nature.   A final traditional embrace began with Calista hugging each of us as we individually followed her around the circle. 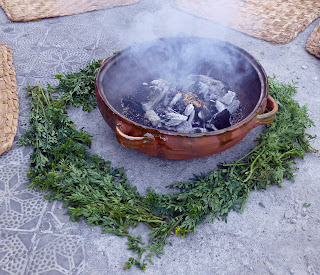 This is not a conversion opportunity. No one wants you to change religions.   You  are either Maya or not – like being Jewish.  Yet it is a recognition that we are all spiritual beings and it can be a  cleansing ceremony allowing participants to release petitions up to creation through nature’s fire and smoke.  My guess is that there will be many of these ceremonies on December 21st as the Mayas give thanks and celebrate their rebirth.

3 Responses to “Maya Calendar and Fire Ceremony With Xalista Gabriel”