Where have all the Tyler Roses gone?  Twice a year they were sold on every other street corner.  A vendor could sweep through the 60 plus rose growers of Smith County, purchase several dozen long stem flowers, and market them wherever cars were stopped.  Those days of $4/dozen are past but the question is why.  What happened?  A visit to the Tyler Rose Garden held answers from the experts.

Mark Chamblee, of Chamblee Nursery, first gave a very short history of the rose which originated in China (repeat bloomers) and Europe (single bloom).  Since there were no native roses in America, the queen of flowers arrived on merchant ships and with immigrants.   But roses today are a product of man-made evolution through cross hybridization begun in Germany in 1887.  While poets celebrate a rose’s sweet fragrance,  growers have other goals. They are more interested in the flower bush that can be dropped into a prepared landscape and survive disease, cold, and drought, be self cleaning and have abundant flowers. Aroma is an afterthought. Universities such as Texas A&M have jumped into the research, helping the quest for the hardiest rose. 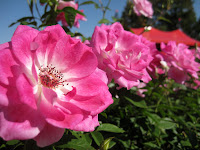 Tyler became famous for its farm grown roses in the 1930’s. Winters were mild enough and the soil had a perfect 6.5 acidity in its sandy loam.  Forty years ago, one-half of the roses in the United States were grown here.  A freeze in the early 1980s killed the entire crop – seedlings, one year olds, and the mature two year old plants.  At a time of 18% interest rates, few farmers even tried to come back.  Today, only three field growers remain.  But Tyler’s processing plants still package and ship more than half of the rose bushes in the U.S. even though  most are grown in California and Arizona.

In order to showcase the rose industry, The Tyler Rose Festival began in 1933.  It is held in October  when roses are in their second full bloom of the year.  The best place to witness this is the Tyler Municipal Rose Garden where 35,000 bushes   demand attention for its 500 varieties, some recent creations and other heritage roses grown before the era of cross fertilization almost 150 years ago.   Names reflect past stars – an apricot blended flower named after Marilyn Monroe, lush red roses for Ingrid Bergman, and shades of pink for an unidentified Sexy Rexy.  I simply don’t have the vocabulary to describe the nuances of the colors.  As we slowly meandered through the gardens, our middle aged volunteer guide was also short in her descriptions with comments like “Aren’t these sweet” and “Isn’t this a pretty color” and “These look like carnations”.  She didn’t need to say much – the colors spoke for themselves.

At another lecture Craig Leiland, director of the Rose Garden, gave lots of good advice on how to grow and tend roses.  Plant in the fall but prune at Valentine’s Day.  Prepared soil is essential with generous mulch required.  Fertilize after first bloom.   The dreaded “black spot” can be due to poor air circulation.  Many at the lectures had very specific questions – How do I direct a climbing rose?  Why do our Don Juans only bloom on top?  I cut my roses back too far.  What do I do? Craig patiently answered them all.

The Rose Festival, with its crowning of the queen and her court,  is probably more famous than the gardens.  At the Rose Museum, we could view the costumes of past royalty.  Mr. Winn Morton of Lancaster, Texas has designed all those worn since 1982.  With sequins and fur, a dress can weigh 50 pounds and the Queen’s train as much as 100 pounds.  This year’s theme was Indochine and we watched cranes lower red pagodas into the Rose Garden where the Queen’s tea would be hosted.  Most of the duchesses come from old Tyler families but area girls also participate.   Many famous people such as Ronald Reagan have participated but sadly,  roses are no longer used to decorate the parade floats. 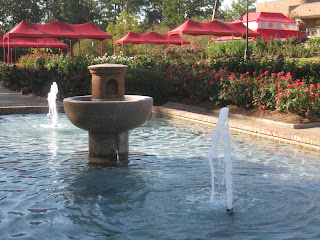 Since our yard is shaded and all roses require 6 to 8 hours of sun, our rose growing days lie in the future.  Maybe, by then, Japan will have developed the long elusive blue rose and growing them will be fool proof.  That is certainly the industry goal.