The Dallas Botanical Garden is inherently well placed – an elevated position with views of downtown over White Rock Lake.  Many visitors come during the seasons of azaleas, tulips, and mums.  But nothing has compared to the crowds that have descended for the recent Chihuly exhibit.

Dale Chihuly’s glass work has transformed an art form and most recently moved glass pieces out of museums and churches into garden settings.  Chihuly discovered his medium in college and even received a Fullbright scholarship in 1968 to work in Venice,  the motherlode of glass production.  Here, he learned that glass blowing is a team sport which has been essential to the creation of his large pieces.  Two separate accidents caused one eye to be blind and his shoulder dislocated, forcing him to use others in the production of his works.   Chilhuly has described the change in his position as  “more choreographer than dancer, more supervisor than participant, more director than actor.”

Chilhuly has also proved to be an astute businessman.  His shows tour the world and the Dallas exhibit came from the Royal Botanical Gardens in London.   It took 3 semi-trucks to carry all the pieces and 3 ½ days and ten men to set it up.  The largest piece was 32 feet tall and required a sky hook and crane to place all parts.

The results were stunning.  By adding rare earth metals such as uranium to the glass, colors shone through, especially from sunlight in the garden.  Ice blue rocks placed in a stream appear to be mini icebergs between green shores.  Rounded multi-colored balls peeked out of shrubs like large Easter eggs.  And a boat full of bright red, green, and orange serpent figures seemed to be drifting toward the edge of a waterfall.  Truly magical.

The languages in the crowd appeared to come directly from the dismissal of a UN General Assembly.  Indian grandmothers, Asian couples, and Hispanic children were enjoying the outing in the beautiful, art-filled setting.  Chihuly may have single handedly  changed the requirements of a botanical garden to permanently include some of his works.  I know the crowd would approve.

The second urban setting we explored was the newly opened Klyde Warren Park that sits atop a heavily used Woodall Rodgers Freeway tunnel.  City parks are often an oasis from the strong sounds of humans and machinery living so intimately together.  I was surprised this new, small  park could pull that off since it is surrounded, above and below, with urban energy.  With the freeway muted by the tunnel, distinct sounds could be heard in the cool breeze – chimes from the nearby cathedral, truck warning beeps as it backed up, cameras clicking, mothers scolding their children, street car clanging by, hip hop music from a passing car, Southwest airplane overhead, a cane tapping on the bricks, dogs panting, grackles cackling, a couple playing ping pong, and the underground irrigation system watering the many trees. 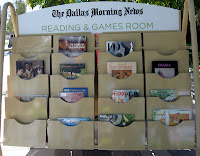 Thanks to the Dallas Morning News, a free outdoor  reading and games room offered magazines, newspapers, and  books for children and adults, as well as chess and checker sets.  Only a drivers license was needed to check-out  the offerings.  As one visitor said, “Right on.”   Further down the park were ping pong tables and a putting green, equally available for public use.  A child’s section was spongy for soft landings while an enclosed dog park allowed canines many opportunities for sniffing.

The good news is that the Chihuly Exhibit has been extended into December and the Klyde Warren Park is a permanent addition to downtown Dallas.  It’s odd to go to the Metroplex for green experiences but these two locations are worth the drive.  Add the Katy Trail, a rails to trails project near downtown, and you’ve found our favorite places.